This page: Shanghai's Yuyuan and Old Town, and Jiading 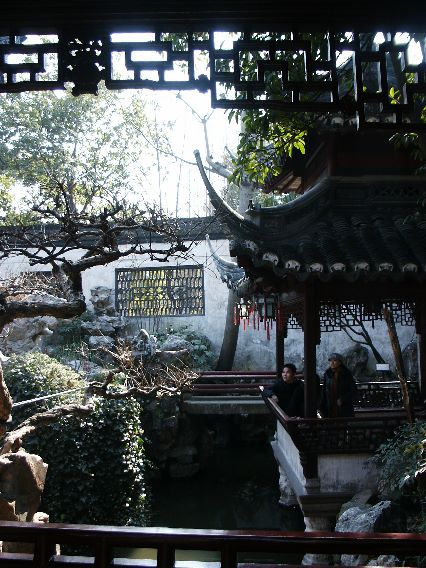 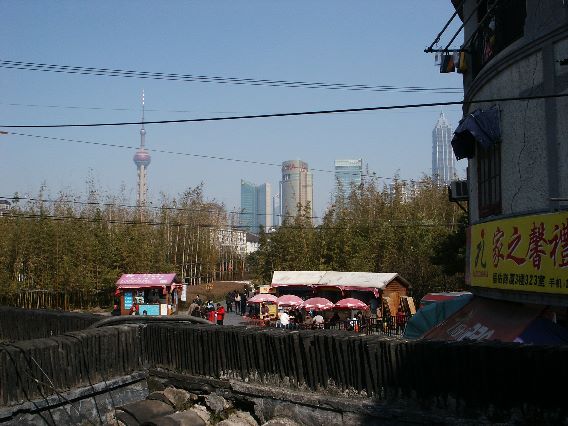 At the northeast corner of Yuyuan there's a raised pavilion where the owner could look out over his estate wall at the city beyond. Supposedly he watched the sails on the Huangpu, though he couldn't see the river itself. Even though I think the bamboo would block any sails, the view now is still pretty cool -- the bamboo and snackbar are in a nearby park, with the Pudong skyline in the distance. 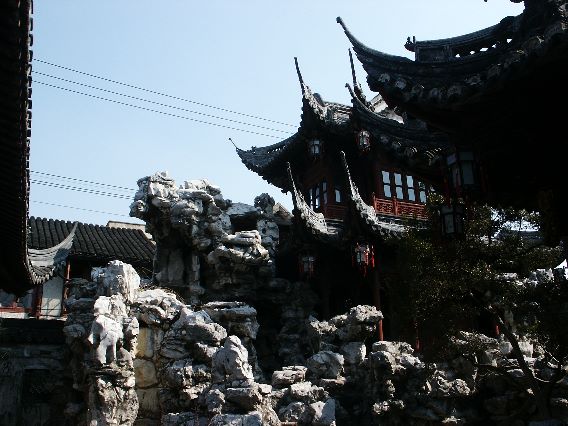 Some nice roof trim and rockery stuff. That rather ordinary-looking window and rooftop to the left side of the picture is outside the compound, on the far side of an alley. 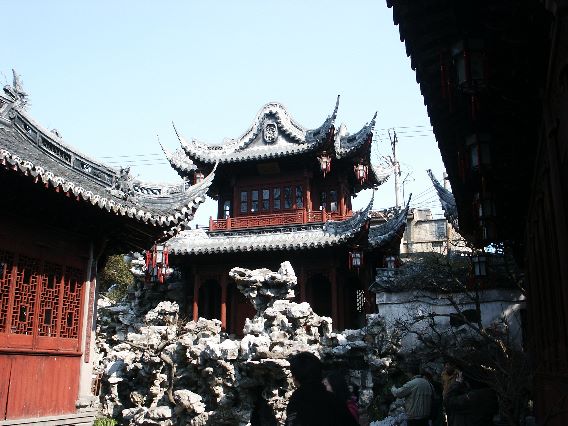 I really like this pavilion and rockery. It's about in the middle of the east side of Yuyuan. 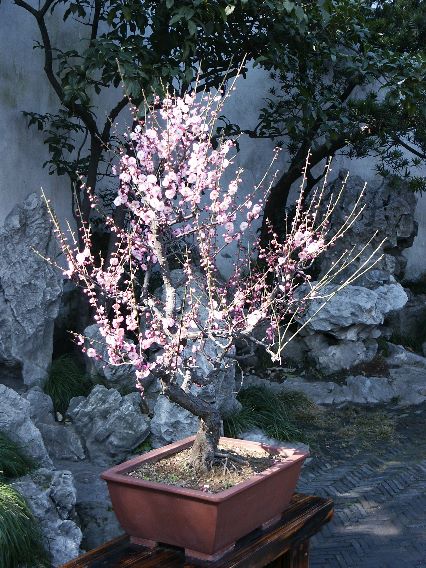 A bonsai cherry tree. The Chinese don't do bonsai with anything like the expertise and ferocity the Japanese do, but they still like to have miniature trees for decoration. 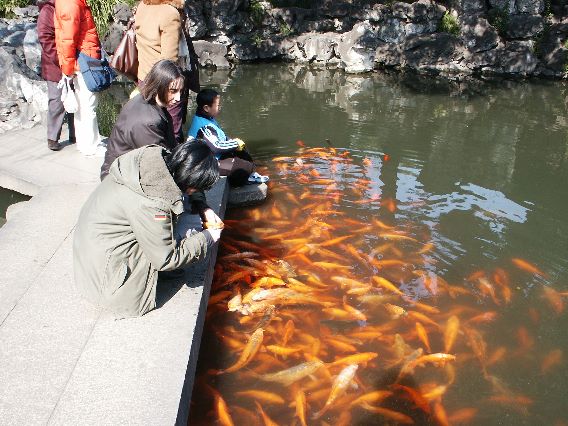 We had some leftovers from lunch that wound up as fish-food in Yuyuan. 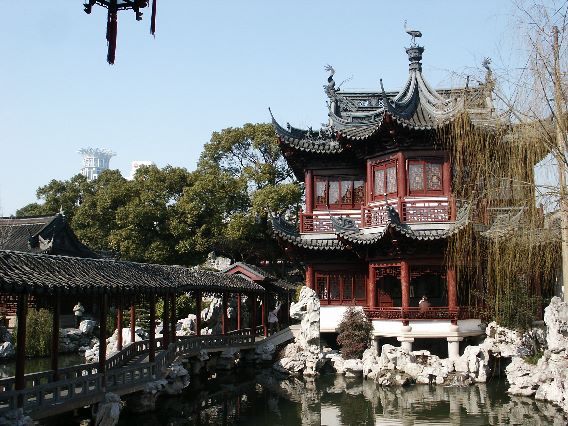 Beautiful as this is, I have to admit it seems a bit gaudy compared to the older, more sophisticated estates in Suzhou. 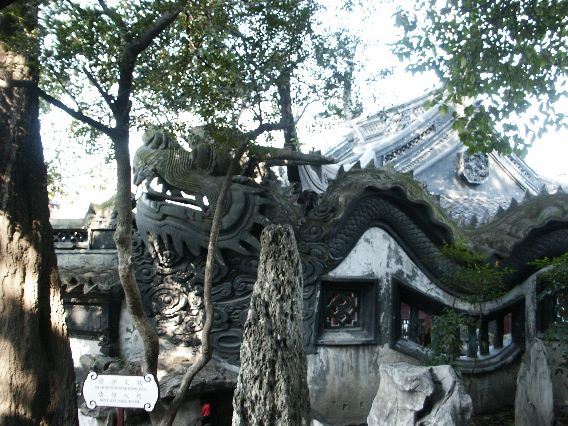 Dragons have been a major decorative element in China for four thousand years, and putting them atop walls like this is fairly common. 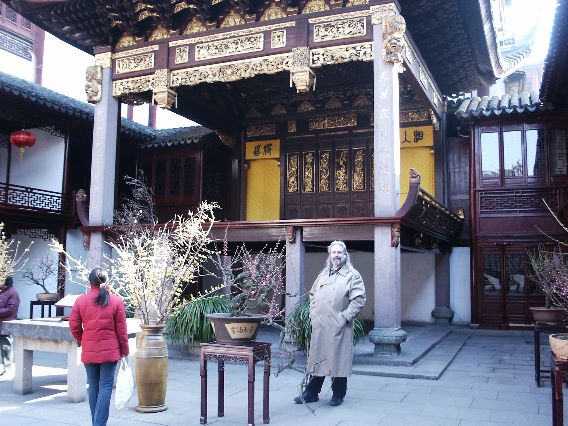 At the south end of Yuyuan is the main house, built around a big rectangular courtyard with a stage at the south end. Here I am with the stage behind me. 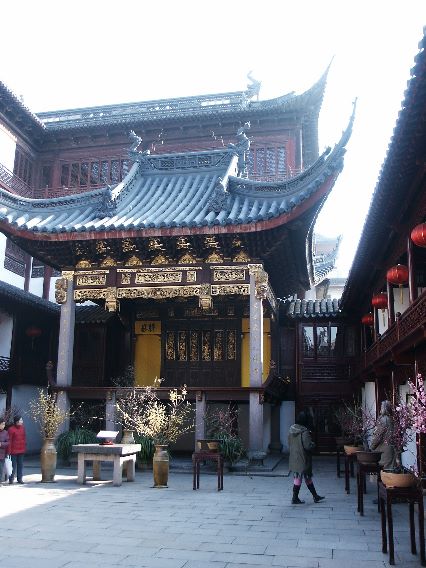 A more comprehensive view of the courtyard and stage. 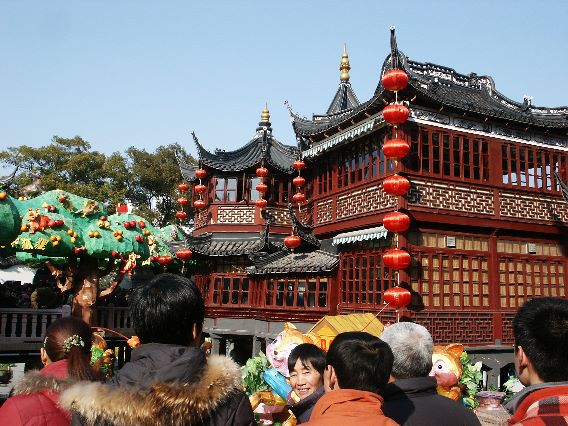 And moving back out of Yuyuan into the adjoining bazaar, here's the Huaxinting Teahouse, built in the 16th century. We didn't go inside; it was mobbed, and word is that it's expensive and the tea is mediocre. It was originally part of Yuyuan itself, but the estate wall was moved to put it outside. 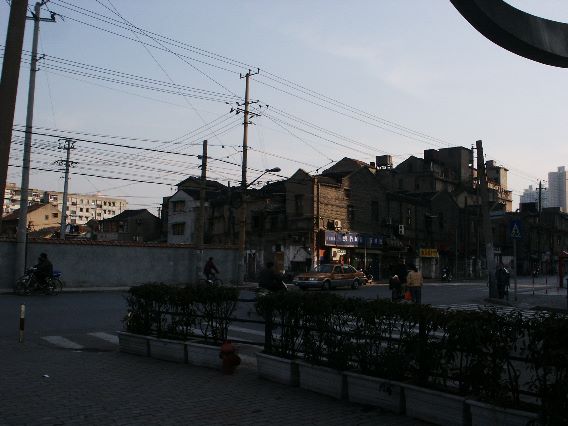 Old Town, not far from Yuyuan. 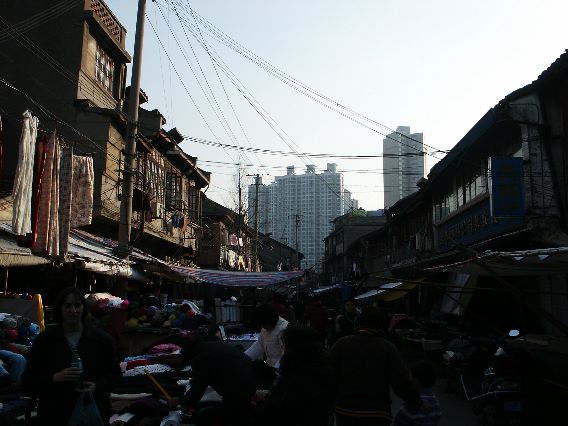 The Cloth Market -- not the tourist attraction, but the real one in a slightly scuzzy part of Old Town, where the locals buy fabric. Julie was determined to find it, so we did, though it took some doing. Fabric here was much cheaper than in any of the ones that show up on the tourist maps. 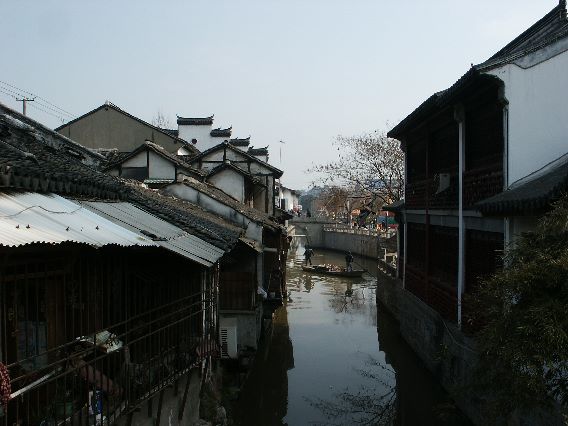 Our final day-trip was to Jiading, once an independent fishing village dating back about 4,000 years, but now incorporated into the expanding Shanghai metroplex. Here's one of Jiading's pleasant canals. 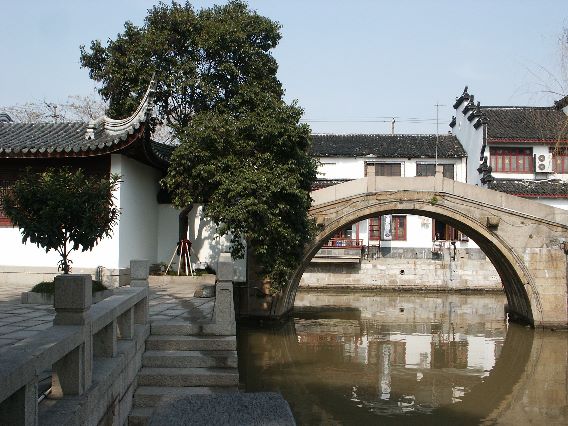 This bridge marks the division between "north" and "south" streets in Jiading. 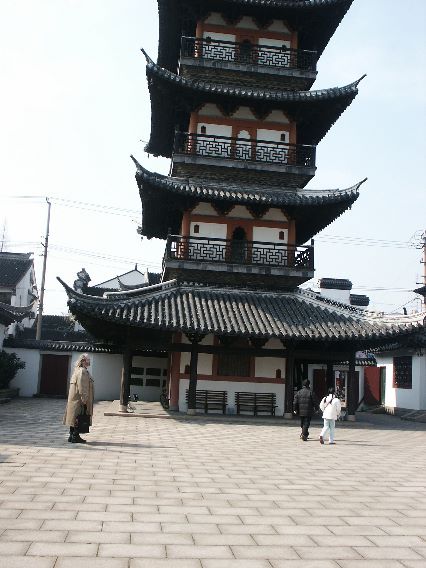 Jiading has a rather splendid pagoda in the center of the old town, the Fahua Pagoda. 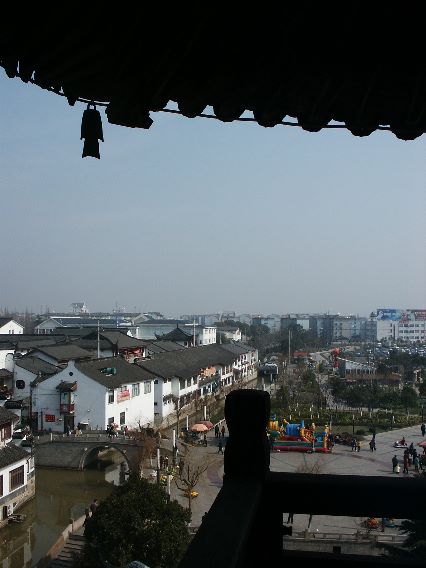 And they let you climb it! Finally, we got to climb a pagoda! At least, Kiri got to climb the whole seven tiers; Julie and I stopped at five, as we didn't fit through the opening to the sixth. This photo was taken from the fifth. 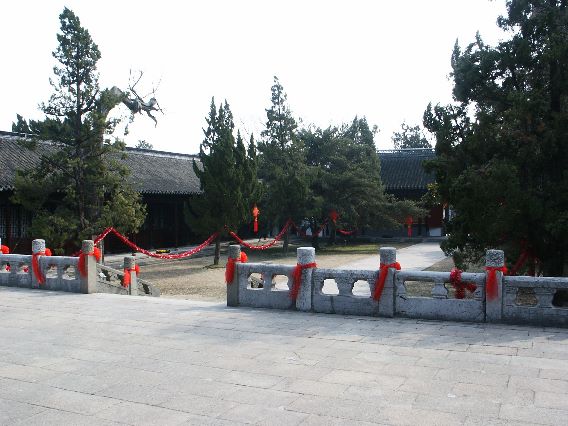 Jiading has a good-sized Confucian temple, too, one that has just recently been partially converted into a museum on the old imperial examination system. 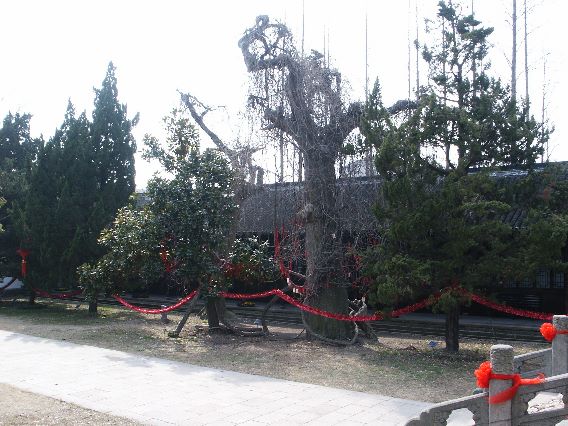 Julie liked the Spring Festival decorations in the temple/museum courtyard. 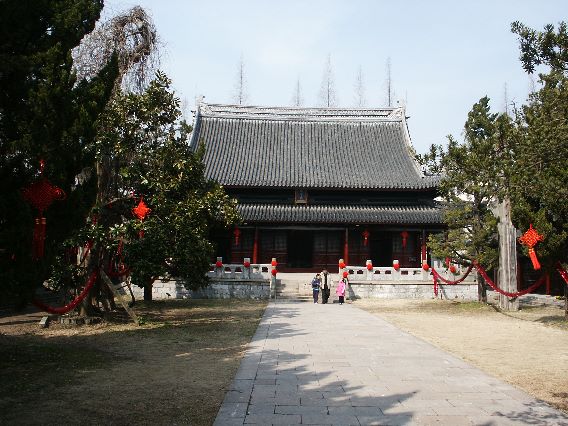 The central temple itself. 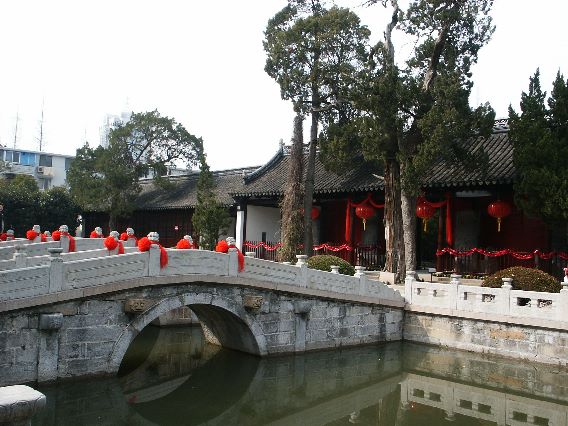 Bridges in the temple courtyard. 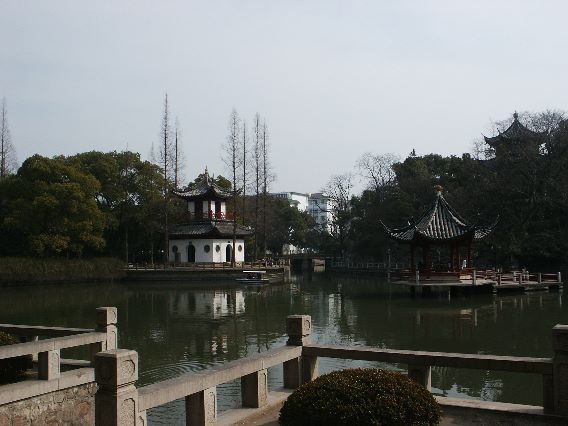 Adjoining the Confucian temple is a park built around a 13th-century garden (and I actually mean a garden, not an estate) called Dragon Meeting Pond. 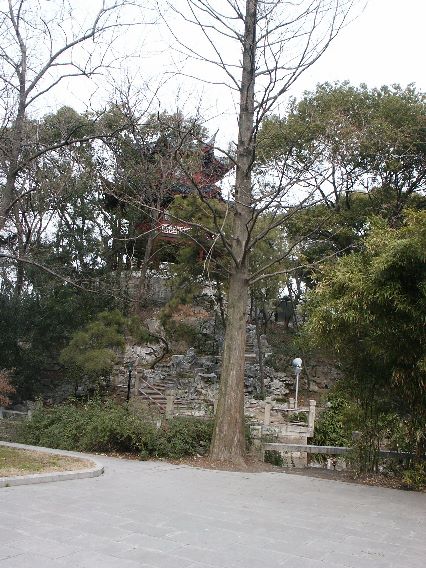 We strolled around the park, but declined to pay the admission charge (trivial though it was) to the original garden. We were feeling gardened out. 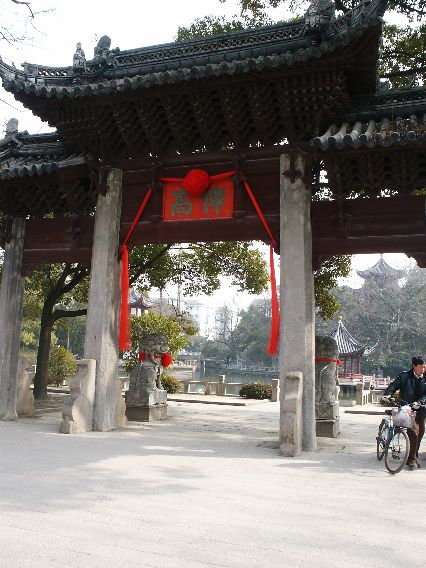 The park had a pretty nice gate.