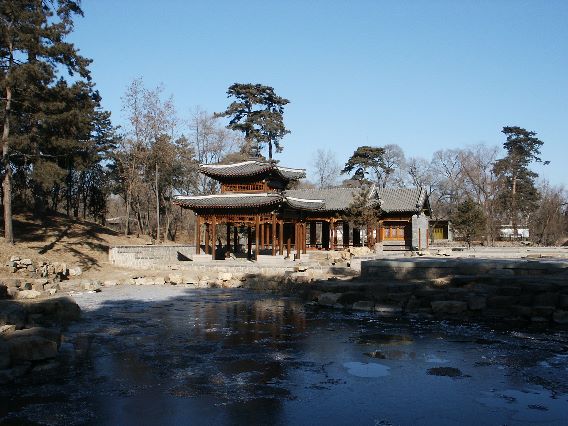 Recently-restored pavilions in the imperial resort compound at Chengde. 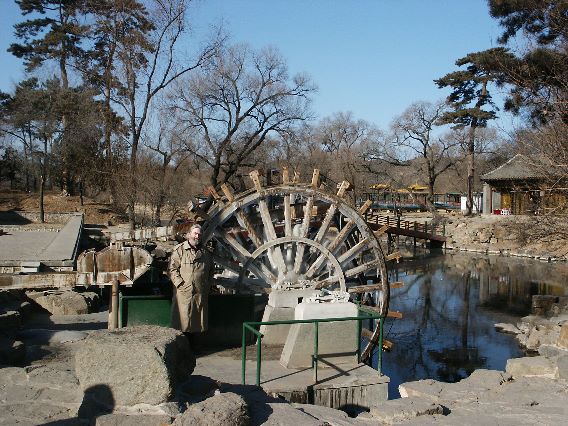 Chengde has a thing about old water wheels; there's a big one in a park at the intersection of the town's two largest roads, and this more moderate one in the imperial compound, and a couple of small ones here and there. 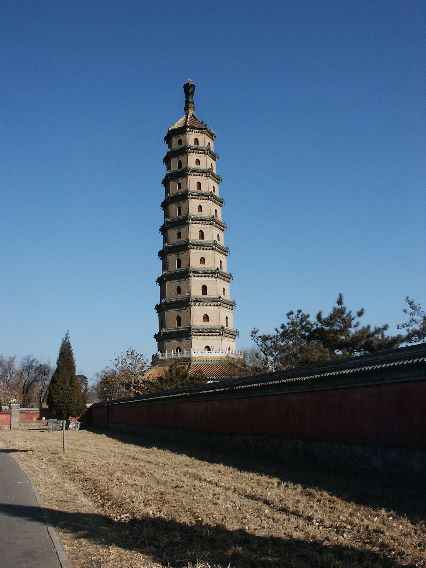 I mentioned before there were originally twelve (now eight) outer temples; well, there were also a few inner temples. This pagoda is what's left of one of them. Alas, the temple itself is gone; there's the outer wall (visible here), the gate, the pagoda, and an empty lot, and the pagoda isn't in terribly good shape inside, so they don't let you go in and climb it. 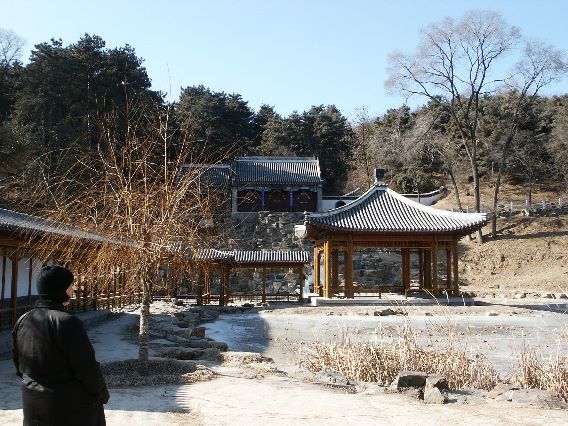 Pavilions, brushy hillsides, frozen ornamental ponds -- that describes a lot of what's in the imperial compound. 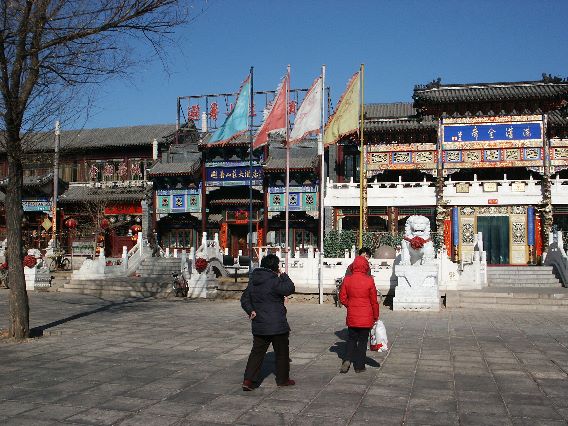 Souvenir shops and restaurants just outside the resort walls, and across the street from our hotel. 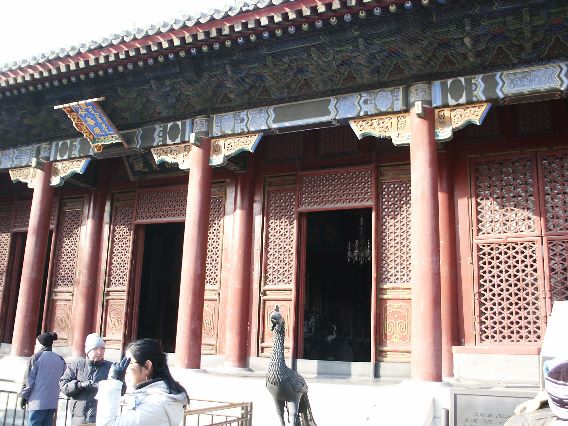 Back to Beijing -- this is the Summer Palace, just northwest of the city proper, where the Qing Dynasty rulers went to escape the heat when the Forbidden City got sweltering but they didn't want to haul themselves all the way to Chengde. There's a hill with cooling breezes and a splendid lake, and a lot less enclosing wall. This is the front of the main reception hall. 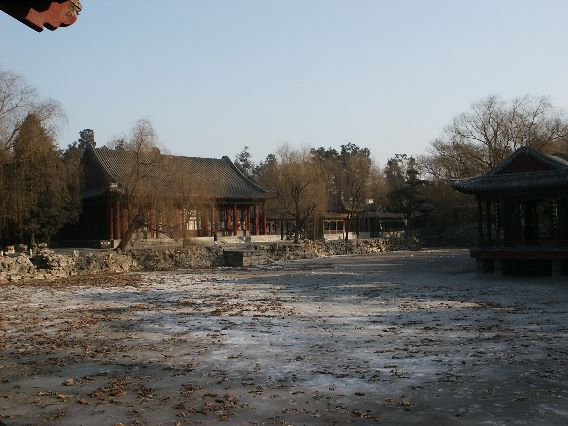 This is the water garden in the southeast corner. Kiri visited in in August of 2005 and says it's astonishingly beautiful in the summer; even in winter, with the lotus dead and the pond frozen, it's far prettier than it looks in this picture. 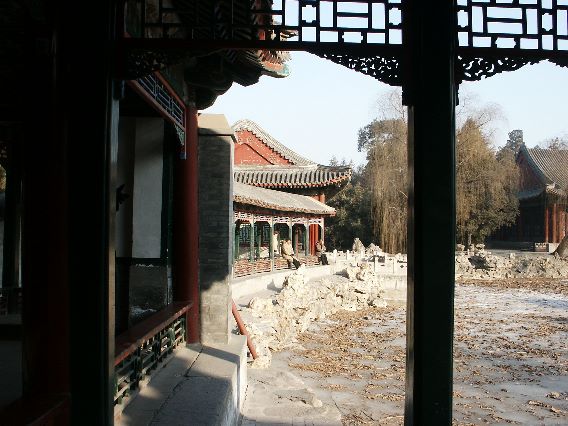 Another view of the water garden. All these buildings around it are purely ornamental, just places to sit and enjoy the breeze and the scenery, and they're interconnected in ways that make no sense at all except that they provided esthetically-satisfying paths to ramble on. 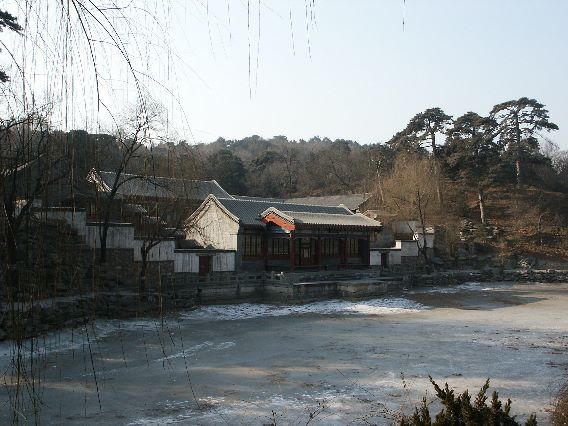 I'm not sure whether this pavilion complex had a specific purpose, but we liked the way it steps up at the sides to fit its setting. 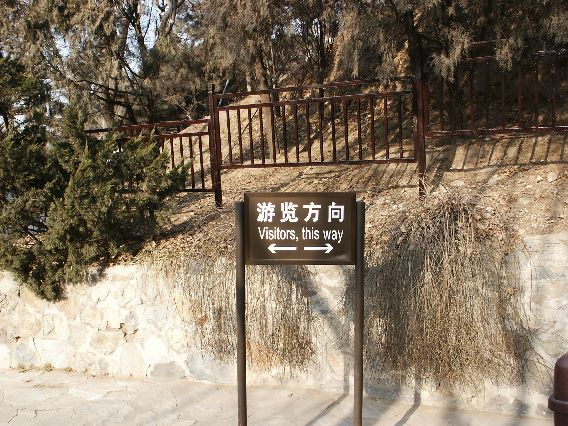 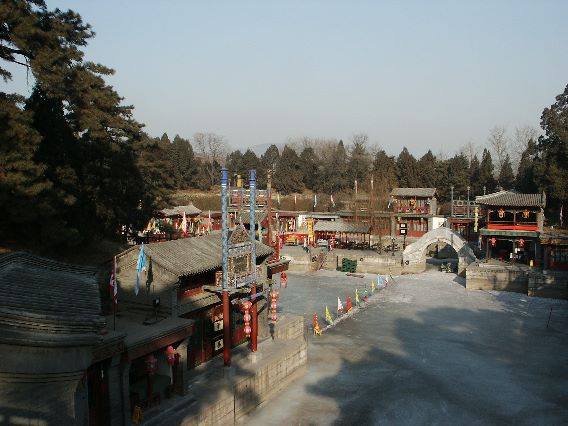 The "Suzhou street." At the time the palace was built the city of Suzhou was considered the most beautiful in all of China, so the emperors had a little replica of a typical Suzhou street built in one corner of the Summer Palace. Not that Suzhou actually ever looked like that. 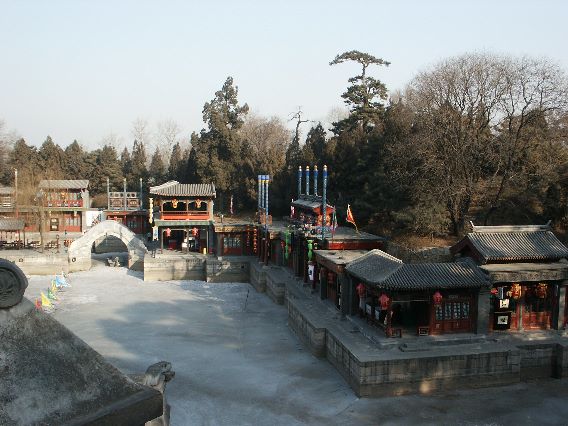 The plentiful water (or ice, in this picture) is there because Suzhou had many canals, including a huge defensive moat around the entire city. It's outgrown the moat now, but the moat and canals are still there. 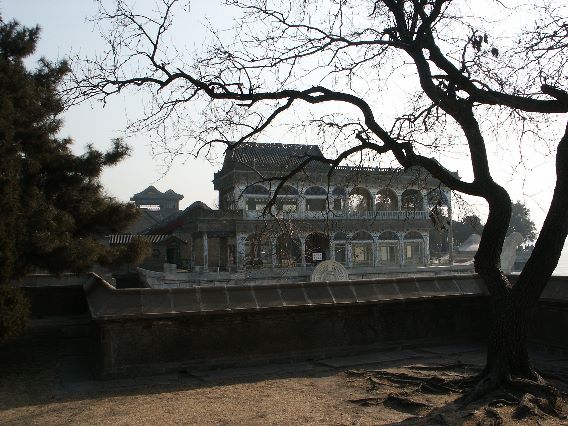 The Dowager Empress Cixi (pronounced roughly "tsuh-shee") was the dominant figure in China for about half a century, starting with the death of her husband at age thirty in 1861. She ran the empire into the ground, and was largely responsible for the collapse of the Qing Dynasty -- though in fairness, it's not clear how much better anyone else would have done with the Europeans and the Japanese screwing China over at every opportunity. At any rate, this marble "steamboat" is an example of how Cixi herself screwed China over -- she had it built with money that was supposed to go toward modernizing the navy to defend against Japanese pirates. 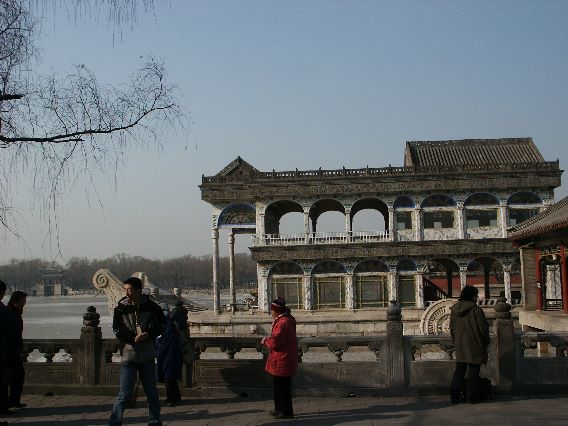 And not only is it of no possible use against Japanese pirates, it's not even a good marble boat! 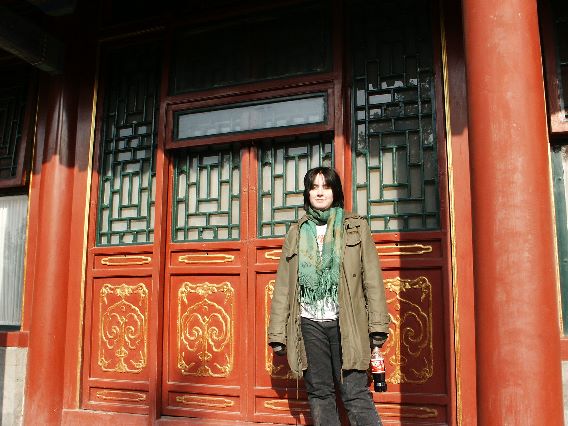 Kiri in the Summer Palace, her beverage of choice in hand. 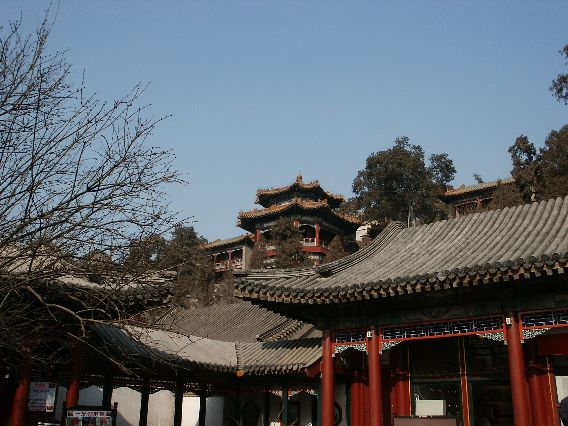 Looking up the hillside in the Summer Palace. 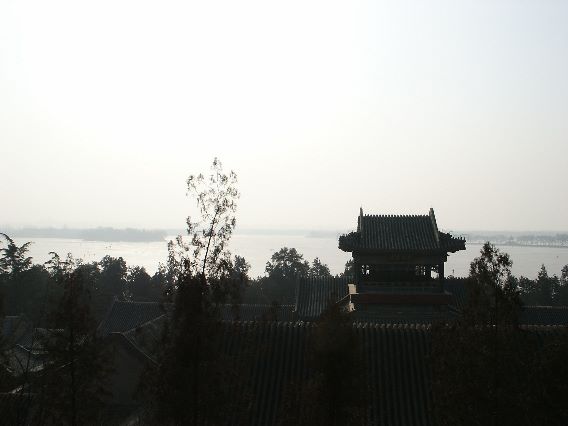 A view of the lake from the top of the hill. 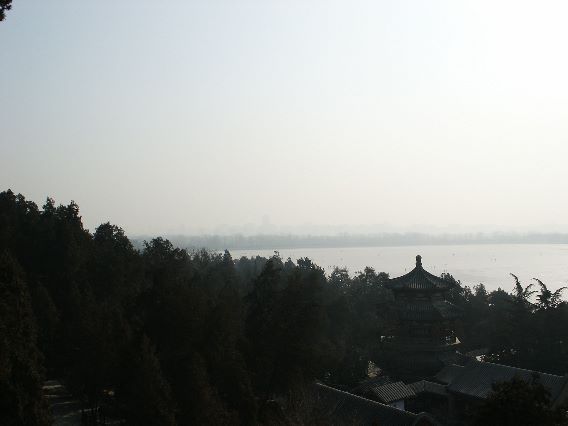 Another view of the frozen lake. 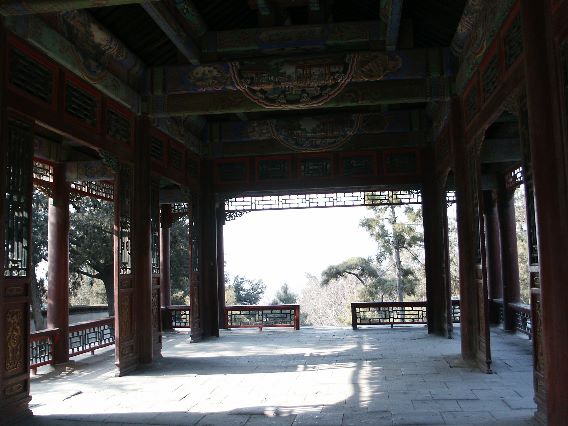 This is a pavilion on the western shoulder of the hill. I was trying to get a nice complicated shot here with the pavilion framing a view of the hills of northwestern Beijing, with the modern city between the Summer Palace and two pagodas on distant hilltops, but thanks to Beijing's regrettable air quality, all you can see is the pavilion. 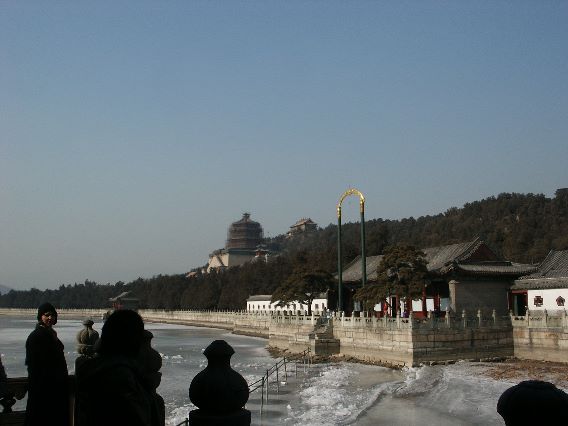 The icebound lakefront. That building on the hillside hidden by scaffolding is the Hall of the Fragrance of Buddha; it's been under repair and closed to the public since at least August 2005, probably much longer. No, I don't know what the name means. The fact is, every single pavilion or hall in every single palace, villa, or garden has its own name, and I've made no attempt at all to remember most of them, because most of them don't make sense in English, I don't trust the official translations, and after awhile they all blur. Many come from Tang Dynasty poems, which doesn't help any. The building on the hilltop behind the Hall of the Fragrance of Buddha is an actual Buddhist temple, where I almost tripped over a woman praying to the central idol. 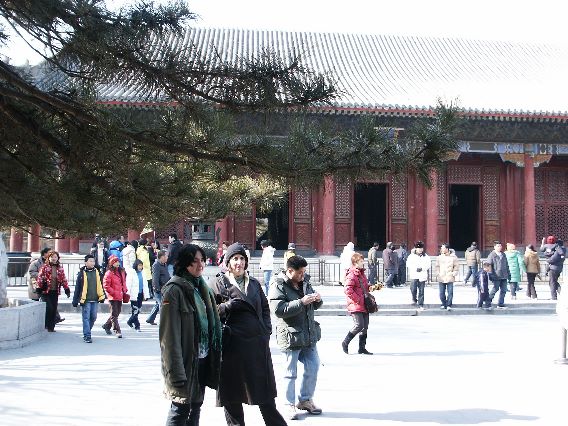 Kiri and Julie back in the forecourt of the palace. 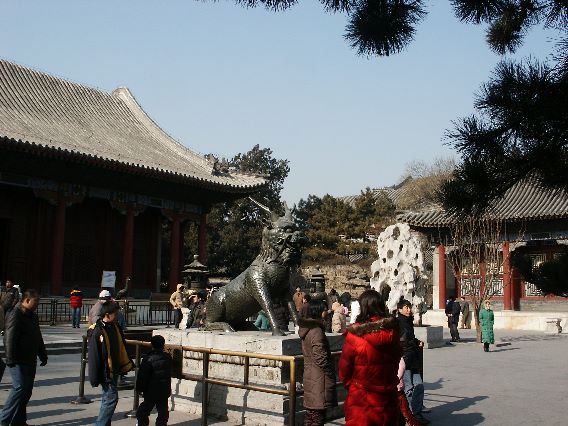 They had some good guardian statuary at the Summer Palace. 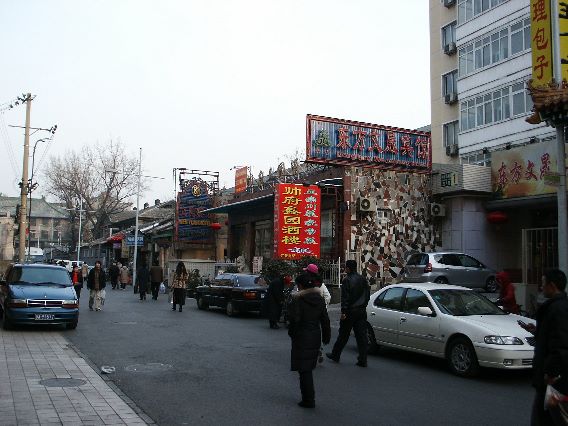 Our last night in Beijing we stayed in a hotel in this alley just off the ritzy Wangfudong pedestrian shopping area. 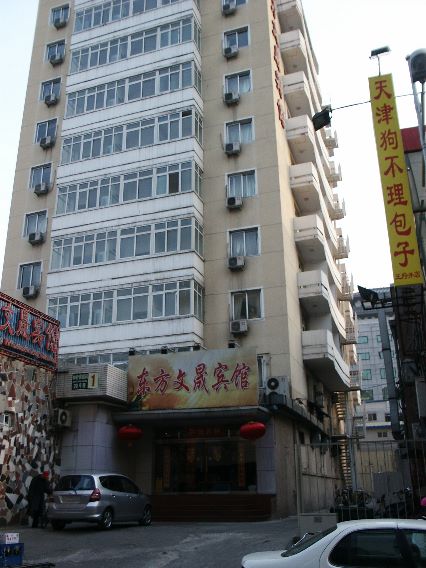 Our hotel. It has no English name and the Chinese was fairly long and hard to remember, so we just called it "the cheapass hotel," because a triple cost all of $25 a night and the plumbing left something to be desired. That wasn't really fair, though, because the rooms were big and comfortable and even if it wasn't fancy, at least the plumbing worked.