This page: Beijing to Shanghai 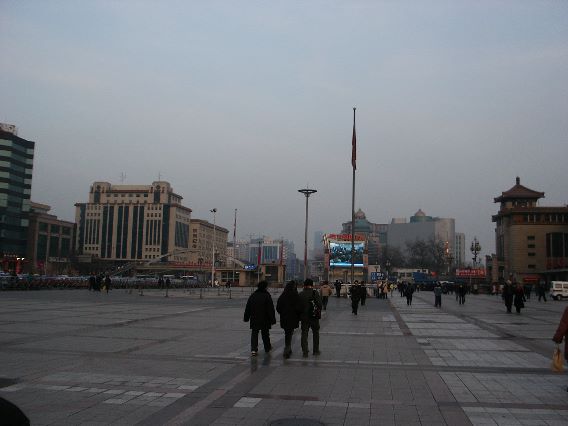 The plaza in front of the Beijing main rail station as we arrive for our night train to Shanghai. Note the giant video screen; there are lots of those in China. Most run ads non-stop; some run propaganda, as well. 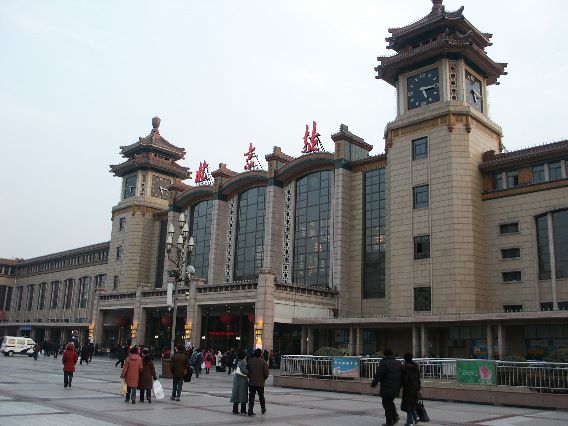 The station. The three characters are Bei Jing Zhan, meaning "North Capital Station." The Chinese aren't much on fancy names these days. There are, by the way, four other train stations in Beijing -- north, south, east, and west -- and the west one is larger than this one, but this one is still just "Beijing Station." 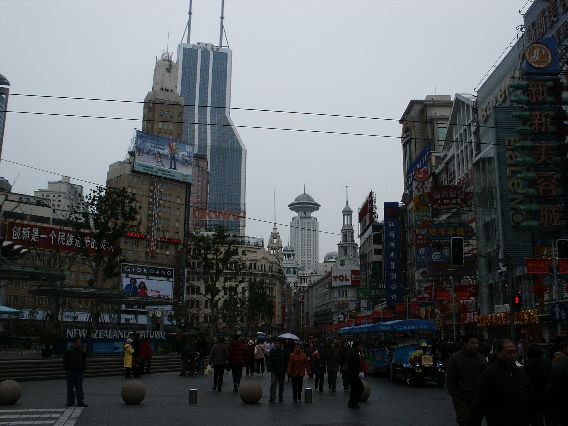 And here we are in Shanghai, the following day. This was our first look at Nanjing Donglu (East Nanjing Street), Shanghai's premiere shopping district. 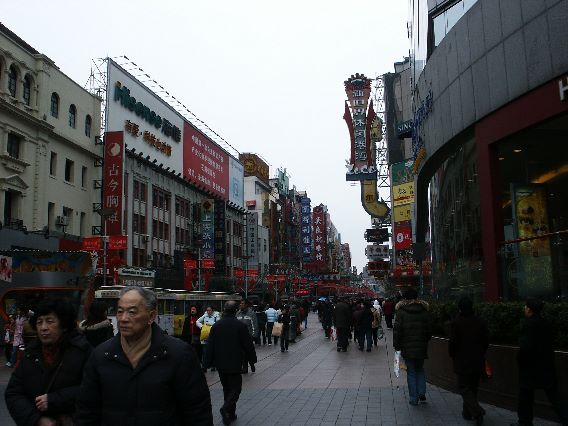 Looking east on Nanjing Donglu. The weather looks threatening because it was -- it rained heavily that afternoon and evening, the only real precipitation we encountered on the whole trip. 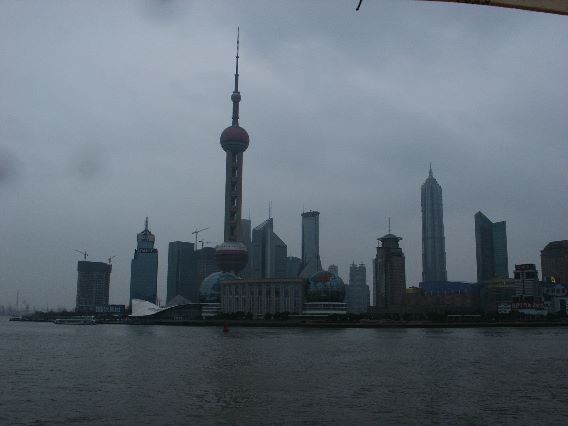 Looking east across the Huangpu from the Bund at the newly-developed Pudong district.

Yeah, okay, that's gibberish. Let me explain. Shanghai is built around three rivers -- the Wusong (also known to westerners as the Suzhou) flows east into the Huangpu, which flows north into the Changjiang (a.k.a. the Yangtze), which flows east into the China Sea. The original heart of the city, built by European traders, is a strip of land on the west bank of the Huangpu, extending a mile or two south from the mouth of the Wusong; it's called Waitan in Chinese, or the Bund in English, both meaning "embankment."

Everything west of the Huangpu is collectively Puxi (xi means west), everything east of it is Pudong (dong means east). Fifteen years ago Pudong was mostly undeveloped marsh, but in 1992 the Chinese government announced a massive development project, and Pudong is being totally transformed. 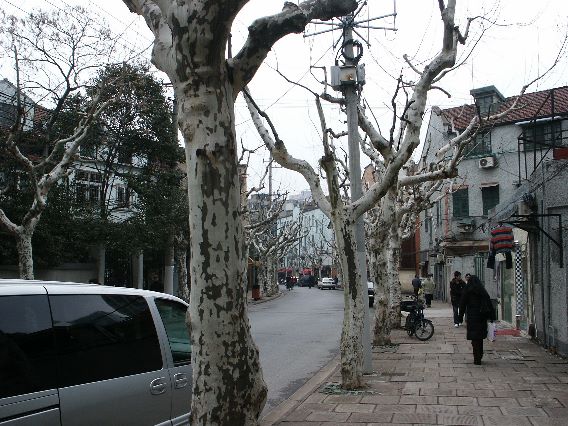 A street in the French Concession. Shanghai is not very old; it was created by Europeans who wanted a trading port in China. The name just means "on the sea," and it has no real history. The British got in first and built along the Bund, but the French, the Germans, and the Japanese all claimed chunks of the city, as well. The French had the biggest piece, and it still has the architectural flavor of 19th-century France, and those silly French-style pruned trees. 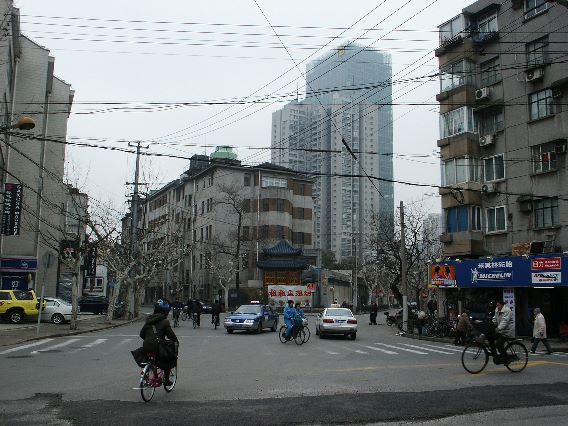 Just a typical street scene, showing the eclectic mix of east, west, old, and new that's all over Shanghai. 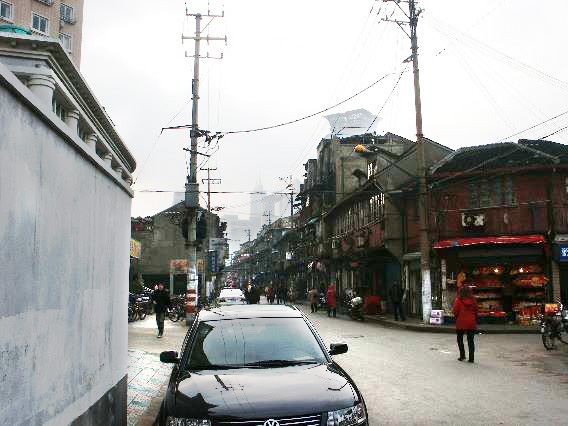 Thanks to Sean Hughes for enhancing this one for me so it's not quite so dark. It's a street in the Old Town district, which isn't really any older than the European-built areas, it's just the part the Chinese built for themselves, wedged in south of the British and east of the French. 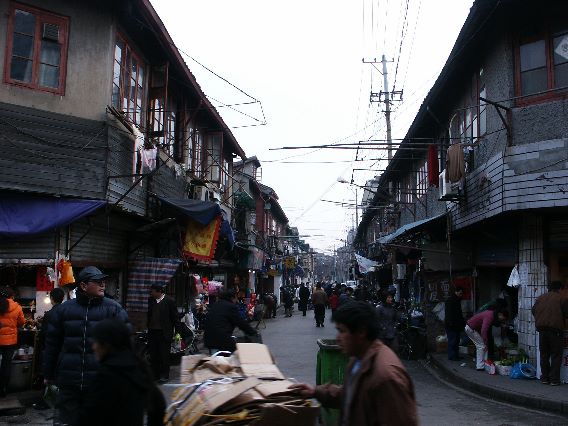 A slightly better shot of Old Town, but of a larger and less interesting street.

We got the impression that most western tourists don't venture into Old Town; we got stared at, and rude terms for "foreigner" were muttered behind our backs. 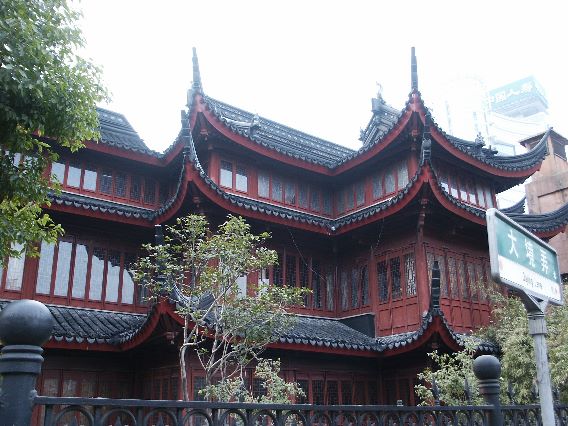 We don't know what the heck this is; it's at the northwest corner of Old Town, and it's beautiful and clearly worth photographing, but there were no signs, it's not on the tourist maps, so your guess of what it is is probably as good as mine. 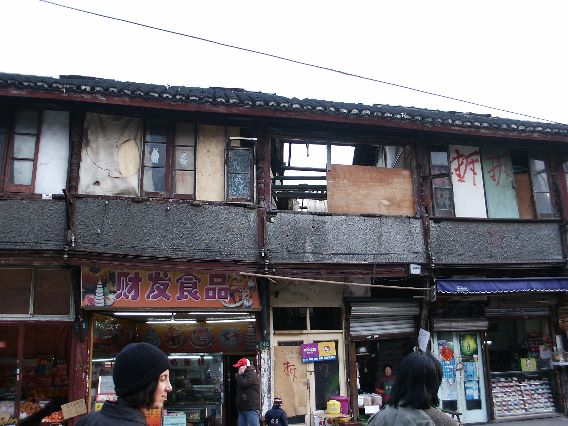 And here's a scene directly across the street from the mystery building. Parts of Old Town are being allowed to decay and collapse; I suppose it'll all be cleared away and replaced with modern stuff in a few years. 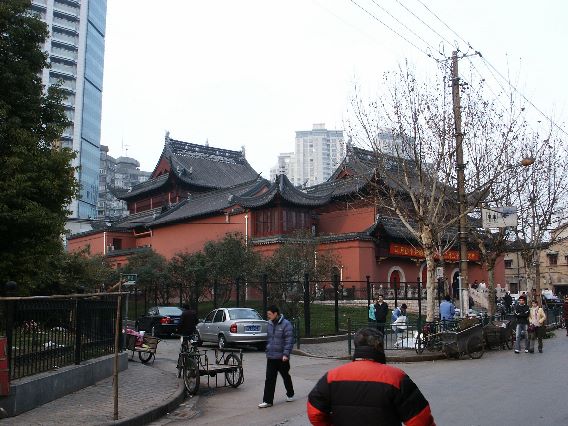 This is a temple right in that same little area, but we don't know what temple. There were no signs in English, and the rather large men standing in the entrance did not give the impression tourists were welcome, so we didn't intrude, but we figured a picture couldn't hurt. There's a Confucian temple in Old Town, and at first we thought this might be it, but we checked later and it's not. I'd guess it's Daoist. 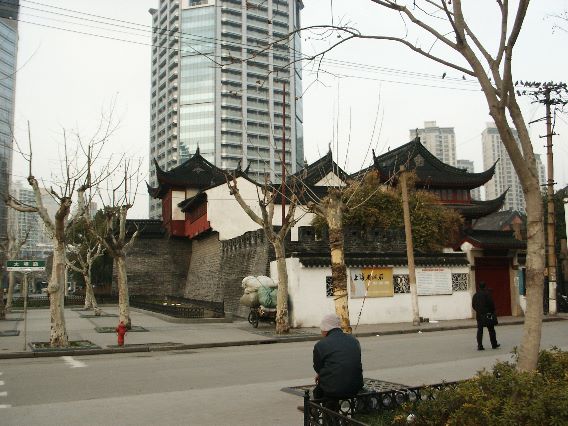 The other side of that mysterious structure from three pictures back. Once upon a time there was a city wall around Old Town, though not a very serious one, and this might have been incorporated into it. It's right near Laoximen, the Old West Gate. 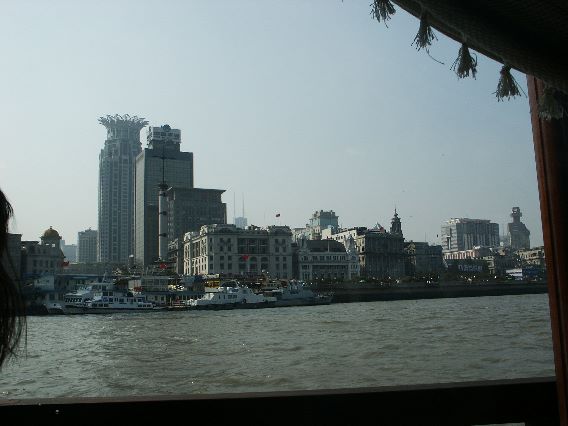 A standard touristy thing to do in Shanghai is to take a cruise on the Huangpu, so we did; here's a picture looking back in the general direction of the Bund. 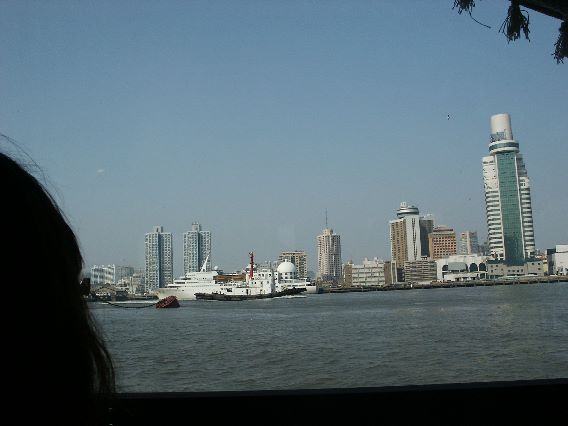 A shot of Puxi north of the Wusong. We wondered what that white vessel was. 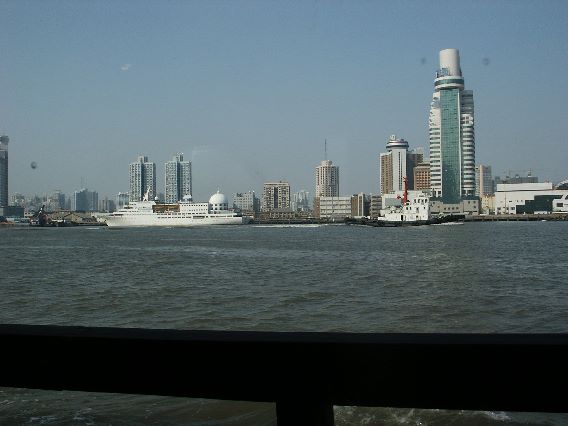 Once we noticed the white domed structure on the white ship we wondered even more; it looked as if someone stuck a fair-sized mosque on a small cruise ship. Who knows, maybe they did. 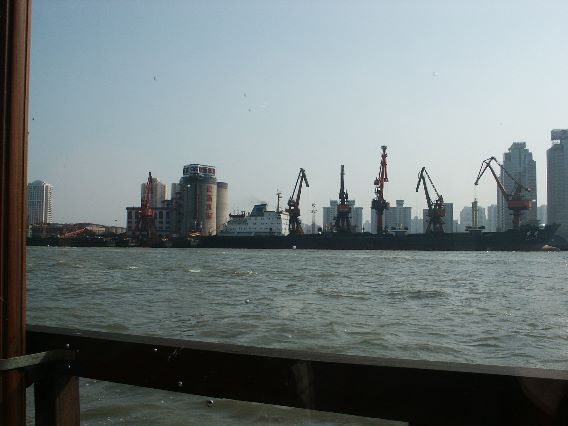 Cranes hovering over the Pudong waterfront. 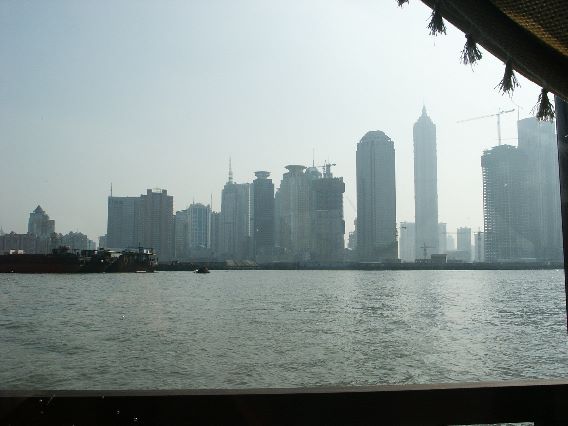 The skyscrapers of Pudong. Notice that about half of them aren't finished yet. 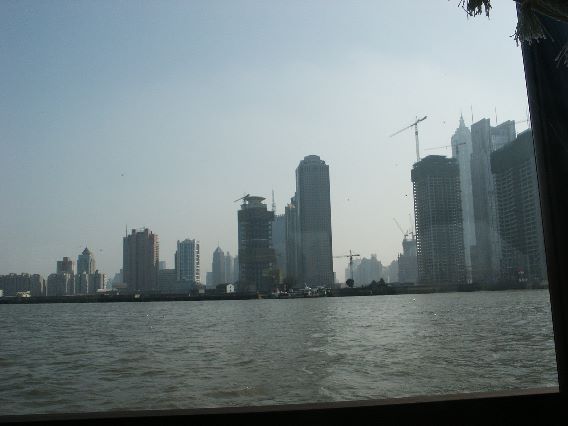 Another angle on that forest of unfinished skyscrapers. 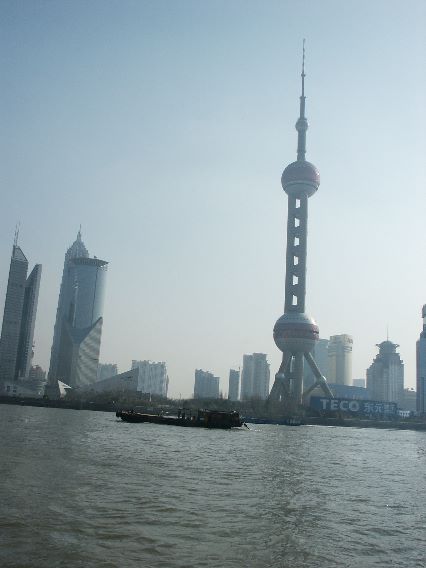 The Oriental Pearl radio/TV tower, looking absurdly science-fictional. Allegedly the tallest structure in Asia and third in the world at the time. We never did visit it, which maybe we should have; ah, well.

By the way, it puts on quite a light-show at night. 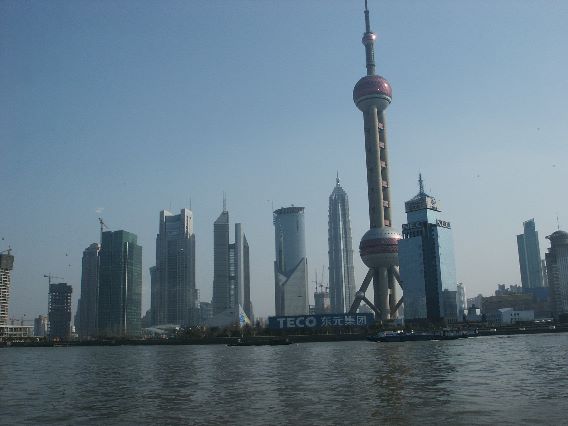 Spaceport Shanghai! Seriously, don't some of those skyscrapers look more like starships than earthbound buildings? 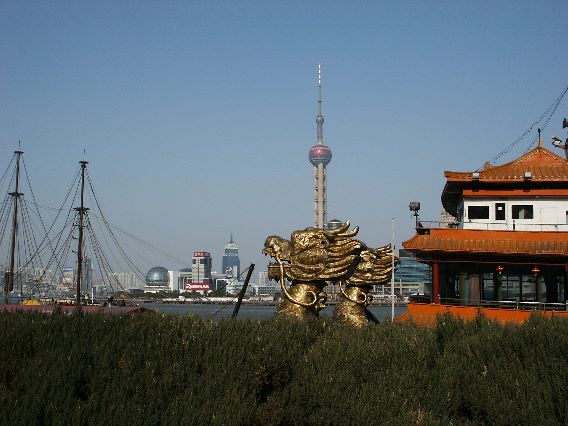 We liked the contrast of the traditional dragon figurehead and the ultra-modern Oriental Pearl. 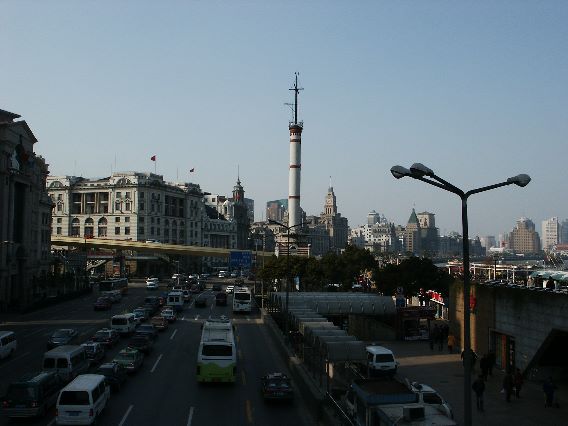 Back on dry land and looking up along the Bund from the pedestrian bridge near where our boat docked. 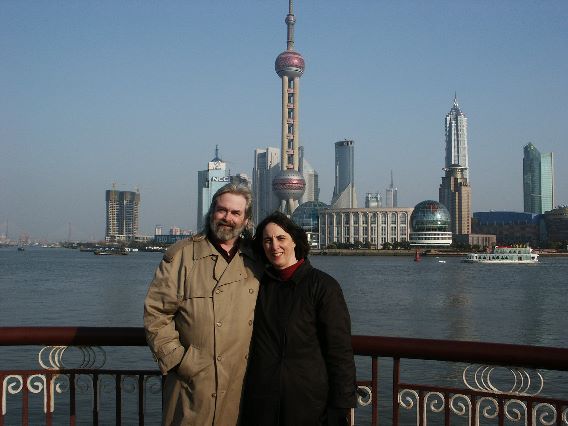 Kiri was kind enough to snap this shot of Julie and me on the Bund, with the Pudong waterfront as backdrop.