This page: The Great Wall at Juyongguan and the first part of the Summer Palace at Chengde The Great Wall at Juyongguan, north of Beijing. This is a pass in the Yan Mountains that was defensively important, so the wall completely surrounds the original town as well as extending off over the mountains in both directions. Kiri and I, preparing for the climb. The portion of the wall the three of us ascended. Here Julie and I are on the ramparts of the town's south gate, with the Wall behind us. Here we are again, looking like the barbarians we are. The view from one of the towers. It was cold up there. You know how when you're packing for a trip, you always forget some little thing? I'd forgotten my gloves. Climbing the Wall was when I first really regretted that. A view across Juyongguan, taking in some of the eastern part of the Wall. Notice the graffiti in the foreground? There was graffiti in Chinese, English, Hindi, Russian... This was about as high as we got. It was really cold, and it felt as if the air was getting thin (though we weren't really at that high an altitude), and we were getting tired! This is looking out at the eastern part of the wall around the town; we'd climbed the western side. 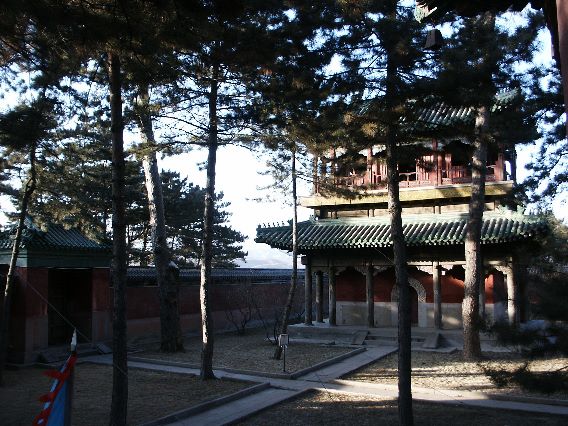 Here we are a day later, in the town of Chengde, where the Qing emperors had a mountain resort/summer palace/hunting lodge, well north of the Great Wall. (The Qing were Manchu; north of the Wall was their homeland.) There were originally twelve famous temples surrounding the imperial compound; eight are still standing, and we visited one of them -- Pule Si, a Zen Buddhist temple. This is one of the buildings inside the temple compound. 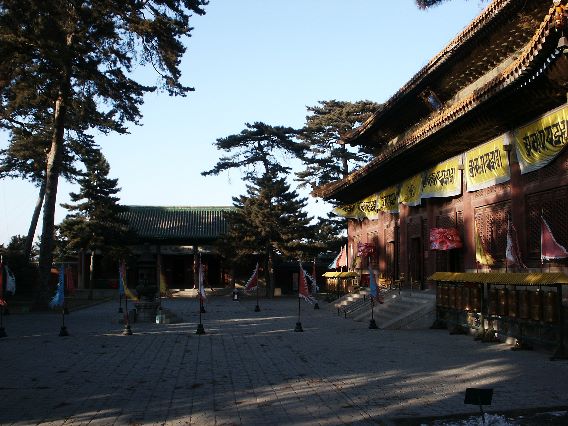 The temple forecourt at Pule Si. 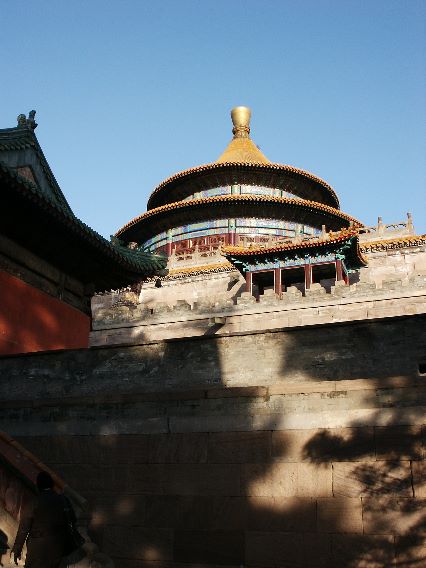 Looking up at the central shrine. 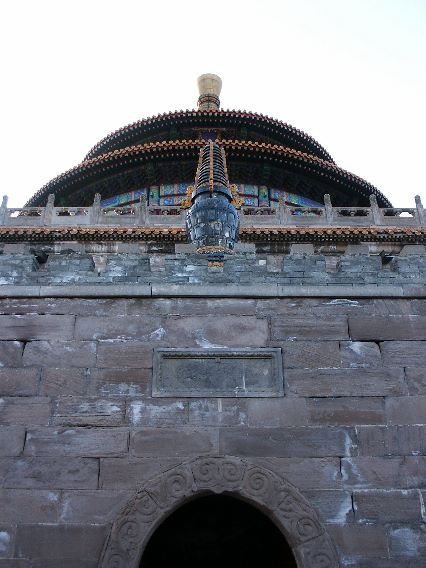 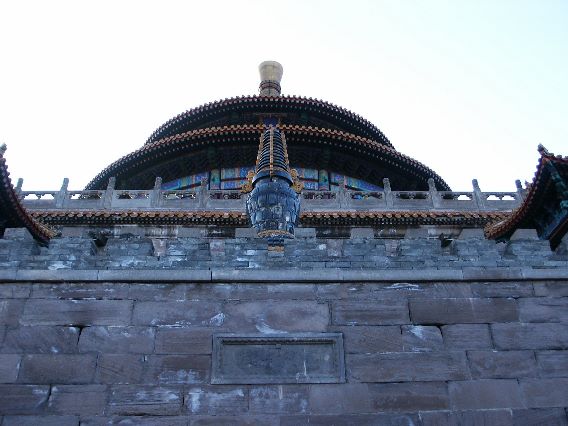 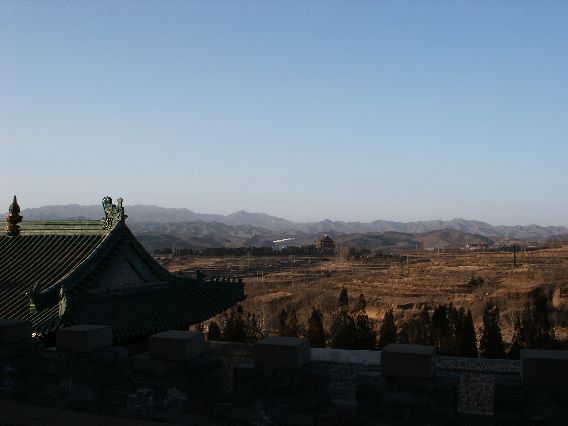 The view from atop the central shrine. 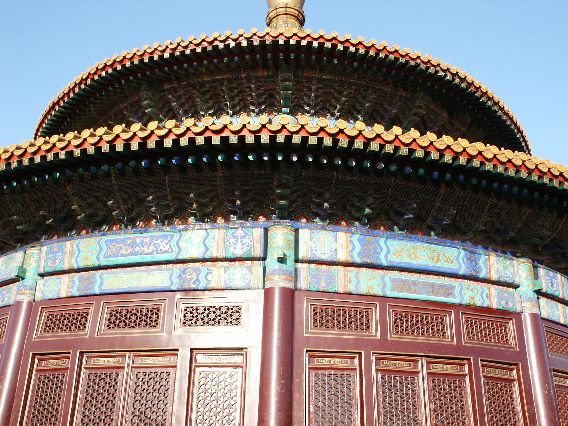 A closer look at the spire. Alas, they didn't allow photos inside any of the buildings. 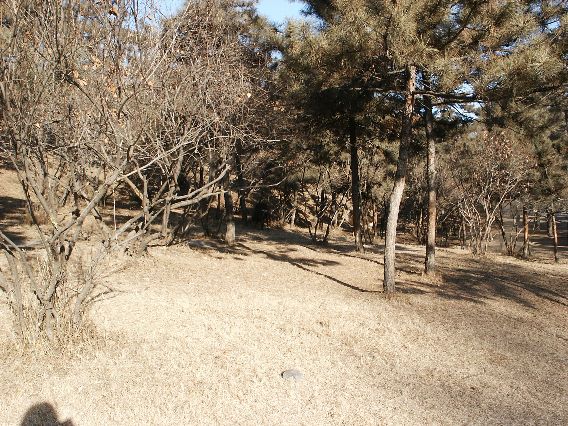 In the old imperial summer resort. This was intended to be a photo of three deer that were hanging around, but I admit I can't see them. 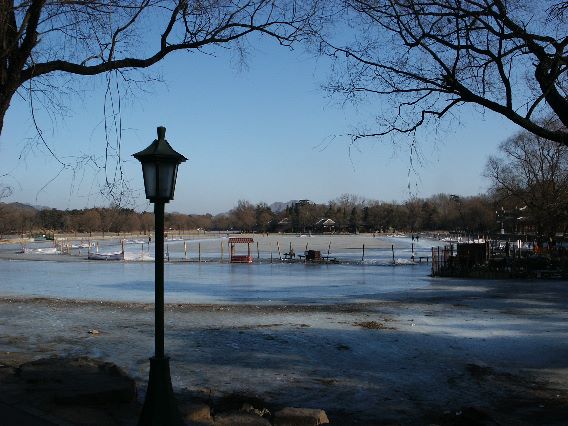 The ponds were intended to provide cooling breezes in the heat of summer, but in February they were solidly frozen over, and the locals used them as a skating rink. 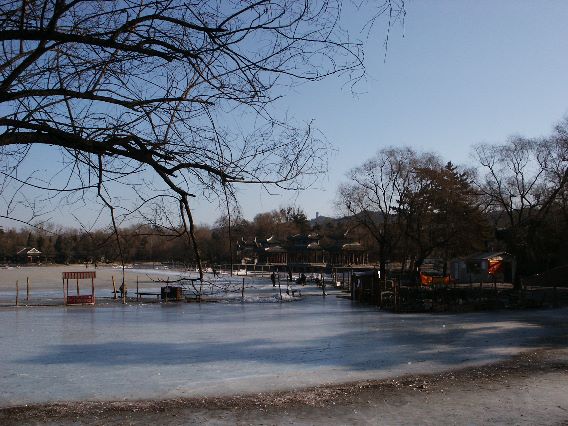 Whatever I was trying for with this picture, I think I missed. 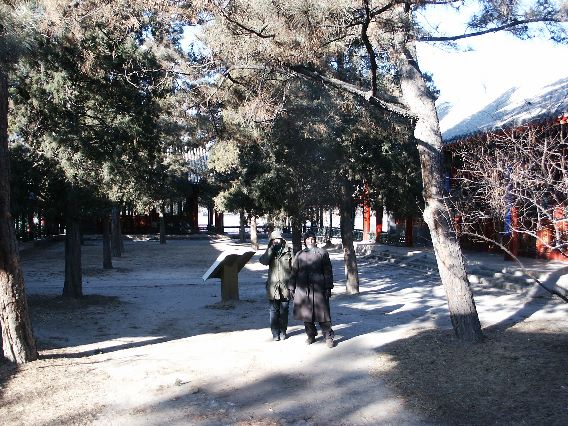 Julie and Kiri in the courtyard of one of the pavilions. 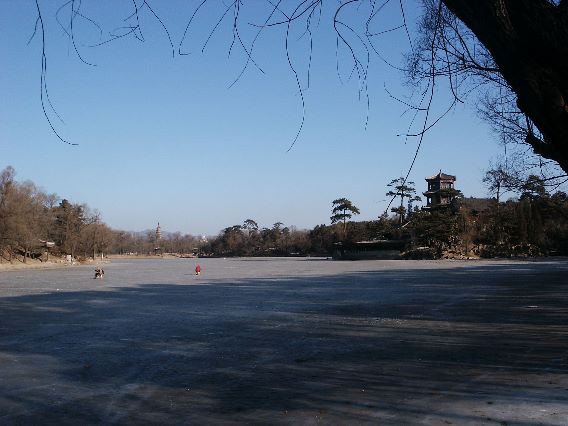 Three things to see here: In the center, an ice-skater. To the left, someone on one of the weird little ice-sleds the Chinese use. And to the right, one of the nicest of the outlying pavilions. 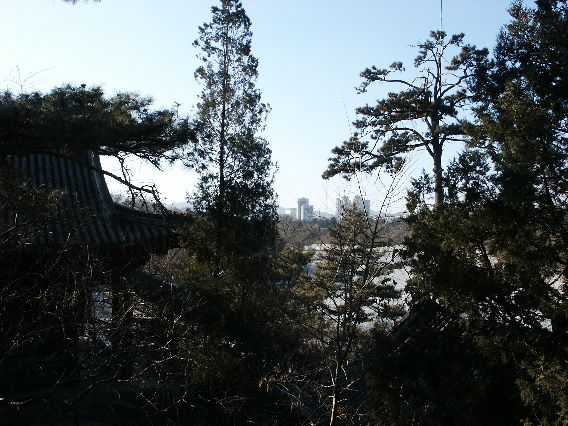 The view from a pavilion, looking out at the modern town of Chengde beyond the resort walls.