This page: Shanghai and Suzhou 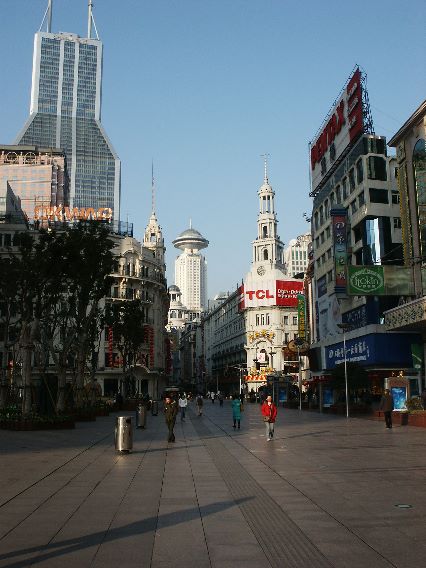 Nanjing Donglu again, in better weather and early morning. That building with the flying saucer on top is the Radisson Hotel, by the way, which manages to charge prices as high as any American hotel. We stayed at the Jinjiang Inn on Fujian Nanlu for the equivalent of thirty bucks a night for a "family room," one double bed and one single, and were quite comfy, but if businessmen want to shell out $200+ a night... 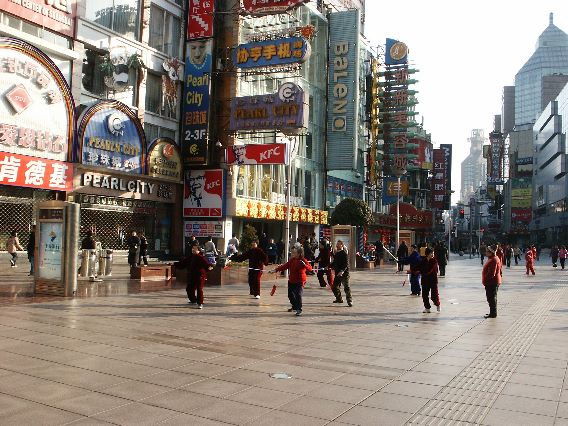 Most of the stores weren't open yet, so the crowds were sparse, and there was room for this tai chi group. 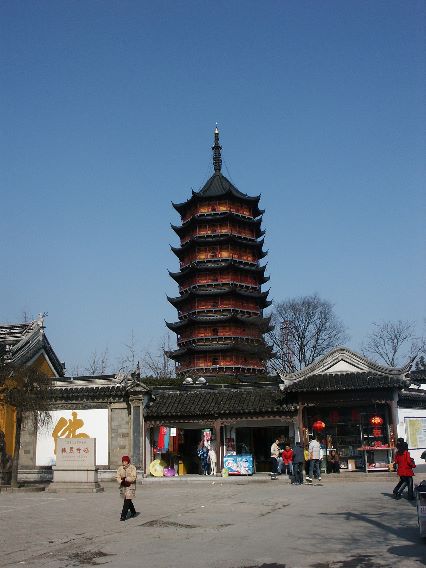 We took a day trip to Suzhou, less than an hour from Shanghai by train, and started our explorations at the North Pagoda. They weren't letting people inside it, though. 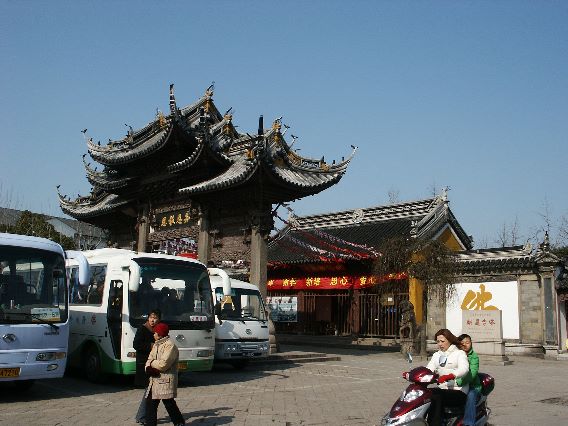 The pagoda had one of the most elaborate ceremonial gates I've ever seen. 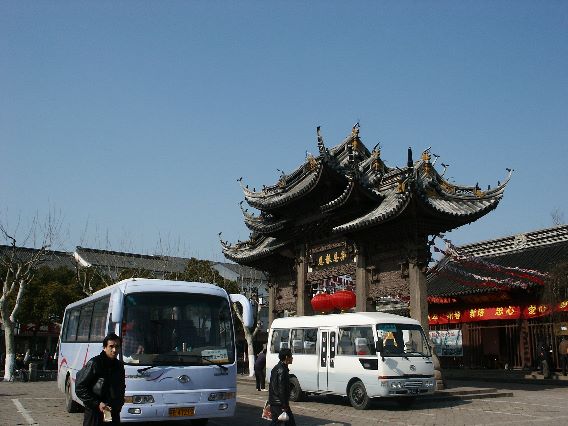 Naturally, as soon as I took the previous picture one of the buses blocking our view left, so I snapped another one. 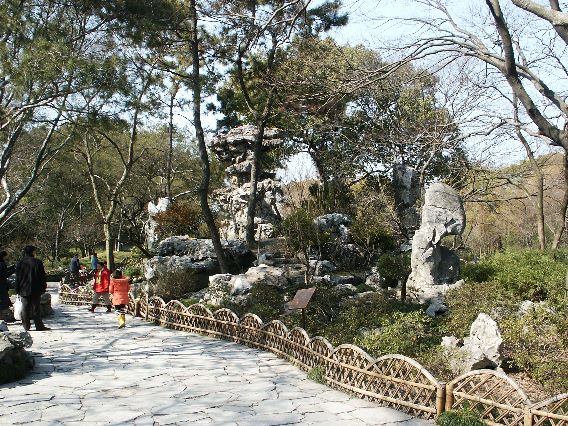 And here we are in Suzhou's top attraction, the Humble Administrator's Garden. Which isn't really a garden by our standards, it's an estate or a villa. And the original owner wasn't an administrator -- the administrator built it for his father, not himself. And none of them were humble; he called it that referring to a Tang Dynasty poem about a humble man's ideal retirement being to spend his days working in his garden and selling his vegetables.

There are no vegetables here, and nothing humble about any of it. I suspect some deliberate irony, but it's really hard to be sure with Ming Dynasty bureaucrats. 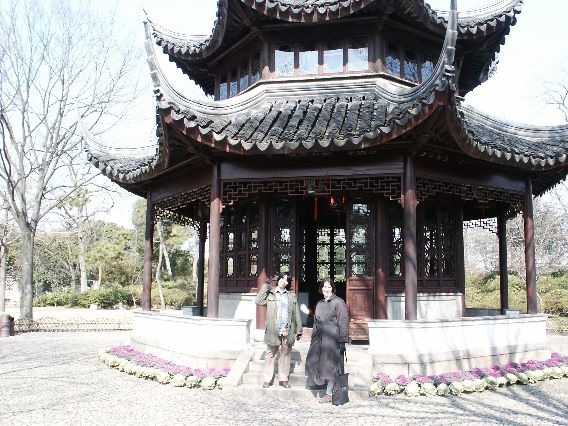 Kiri and Julie in front of one of the fancier pavilions -- and okay, there are vegetables, if those ornamental cabbages count. 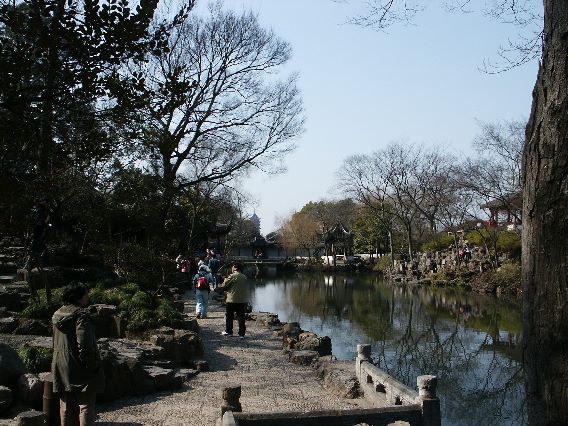 Suzhou is far enough south that the ornamental ponds weren't frozen. They were lovely, in fact. 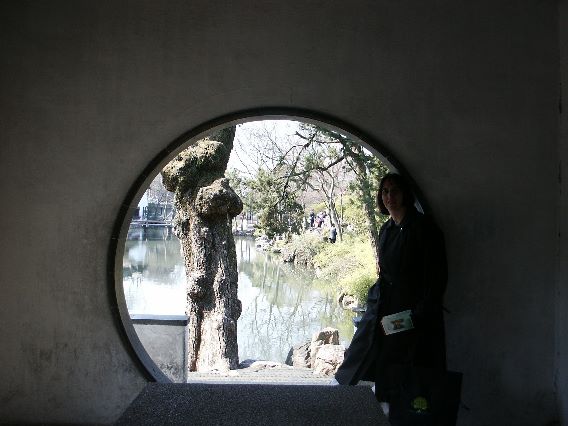 These round doors are called "moon gates." That's Julie at one side of this one. 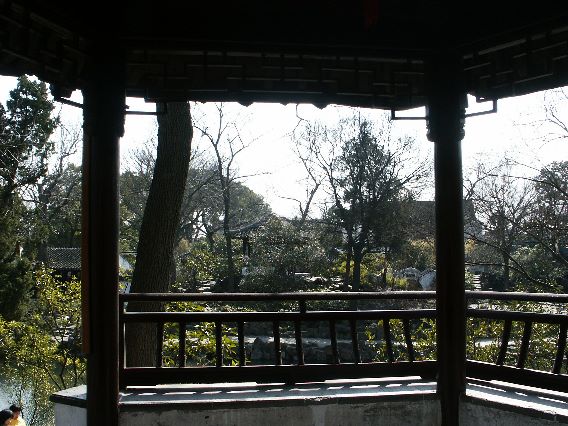 The entire complex was designed to provide a variety of beautiful places to sit and admire one's surroundings, and it was a very successful design. 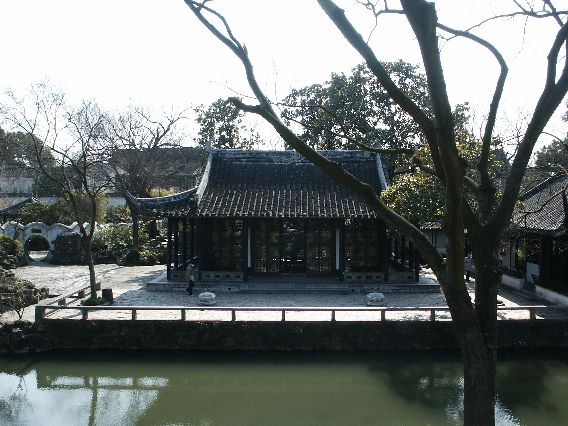 The garden is divided into three sections with subtly-different emphases; this is the major pavilion in the central section. 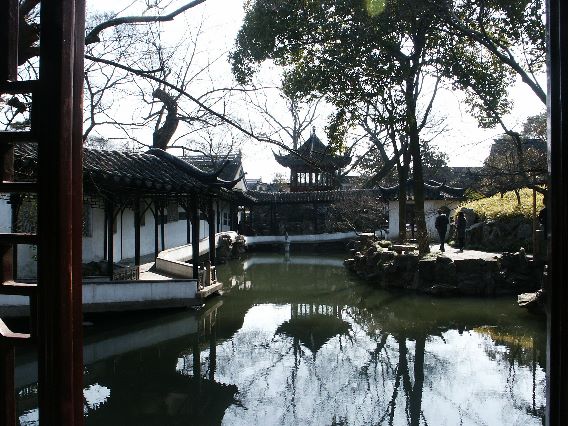 I'm getting to the point of not knowing what to say about these except, "Isn't it beautiful?" 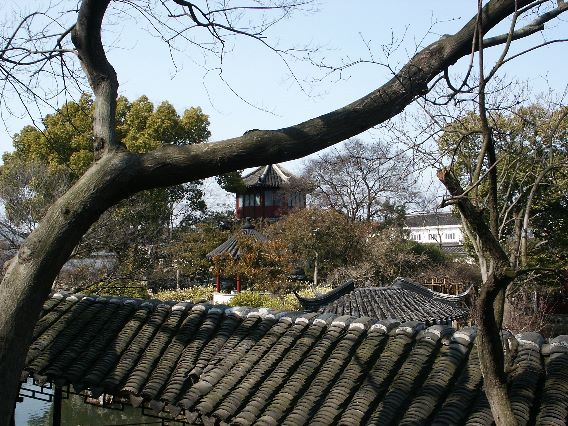 Some of the pavilions are up on little artificial hills, reached by climbing rockeries, just high enough to look out across the roofs. 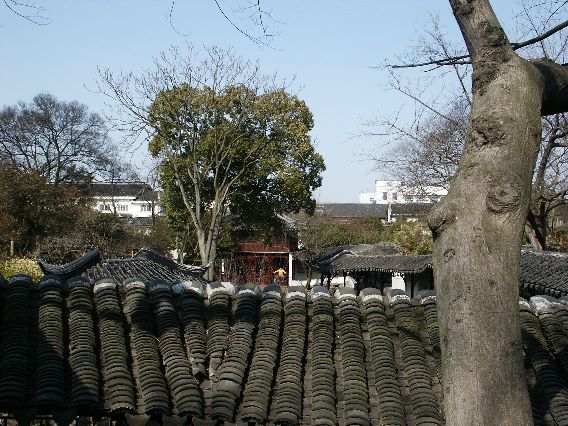 In China they've been making tile roofs the same way for at least two thousand years now. Probably much longer. 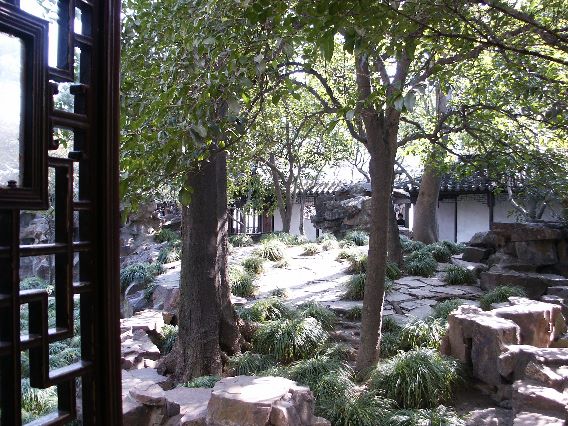 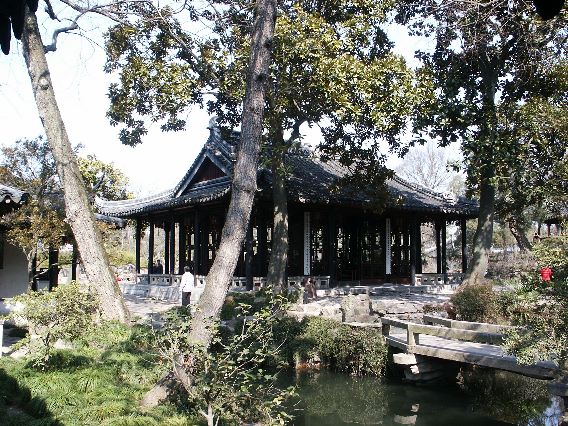 In European palaces, the rooms mostly seem to have been built to show off -- the more public they were, the grander and more elaborate. In these Chinese estates, though, there were fancy reception halls, yes, but it was the inner, most private areas, like this, that were built simply to be beautiful. 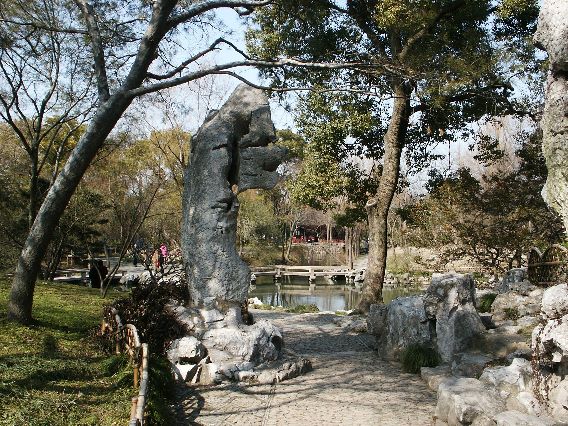 The Chinese fascination with grotesque stone structures dates back more than a thousand years, to at least the Tang Dynasty, and shows no sign of fading. 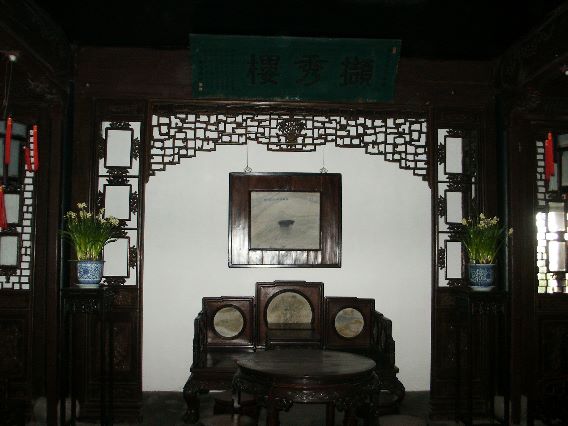 Here we've moved on to another of Suzhou's famous garden estates, this one the Master of the Nets' Garden. 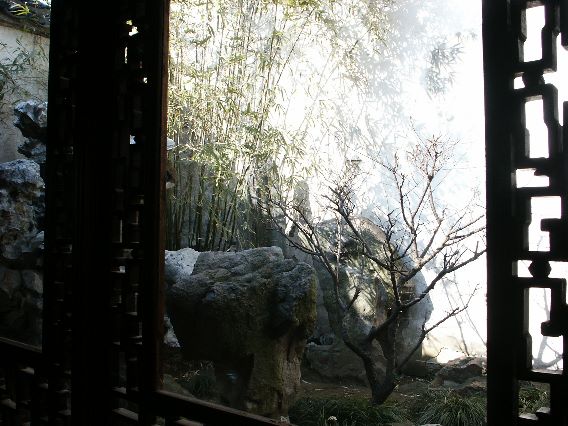 A tiny bamboo garden, at the end of a path that exists solely so that this view from a corridor will exist. 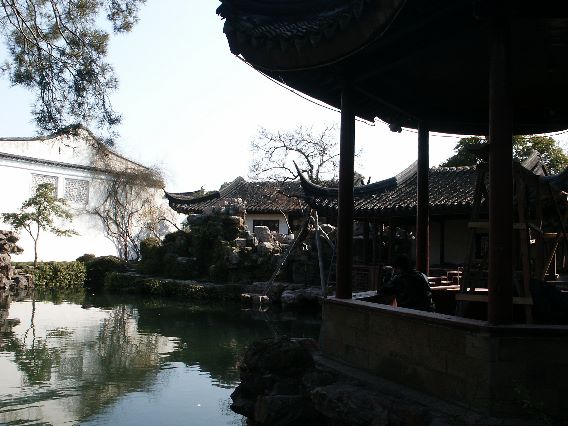 The Garden of the Master of Nets is much more compact than the Humble Administrator's Garden, but still squeezes in as much water as it reasonably can. 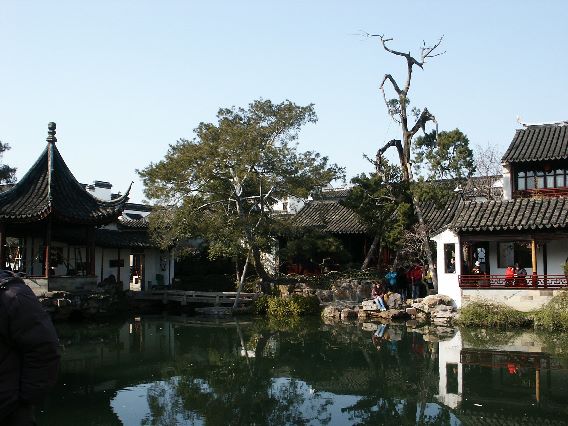 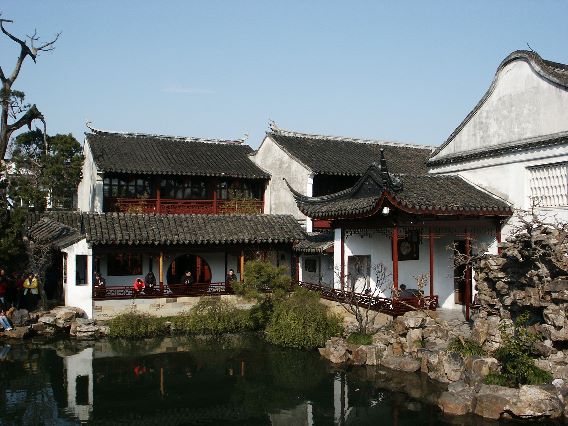 A view of the main house of the Master of Nets, as much as there is a main house, since libraries and studies are scattered about the garden. 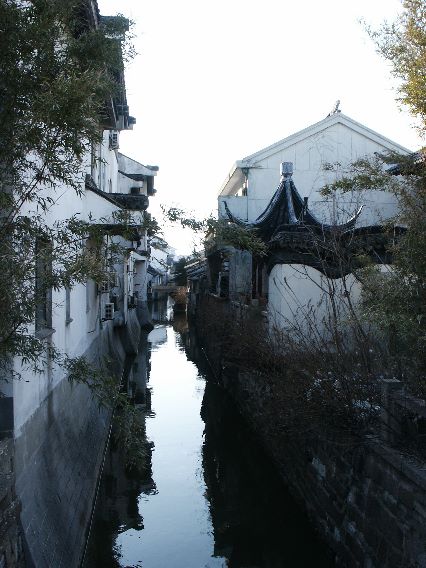 One of Suzhou's canals. 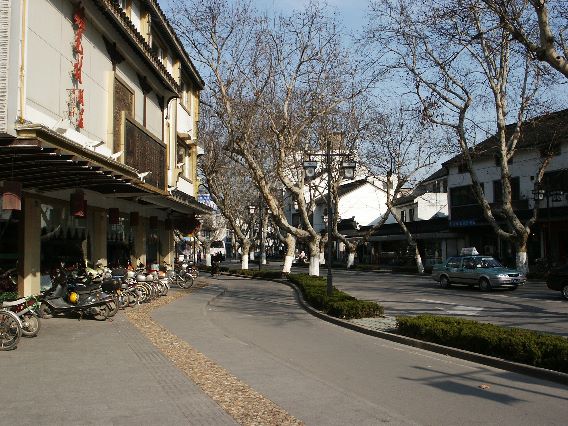 An ordinary street in Suzhou. It's not the most beautiful city in the world anymore, and it doesn't look much like the "Suzhou Street" at the Summer Palace, but it's still a pretty nice place.