This page: Suzhou back to Shanghai, the Shanghai Museum, Yuyuan, etc. 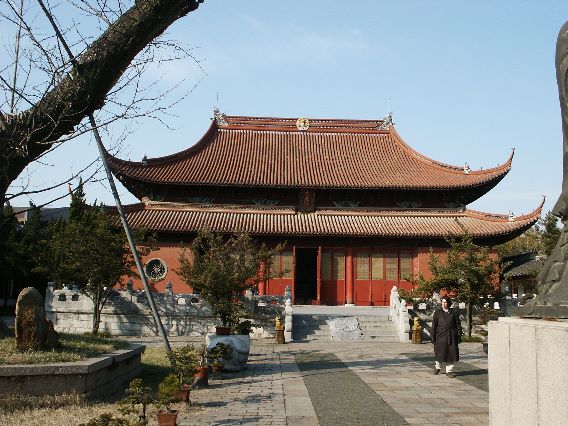 Suzhou's Confucian temple. Every major city had one under the Ming and Qing dynasties, with a statue of Kong Fuzi and images of some sort of his seventy-two favored disciples. 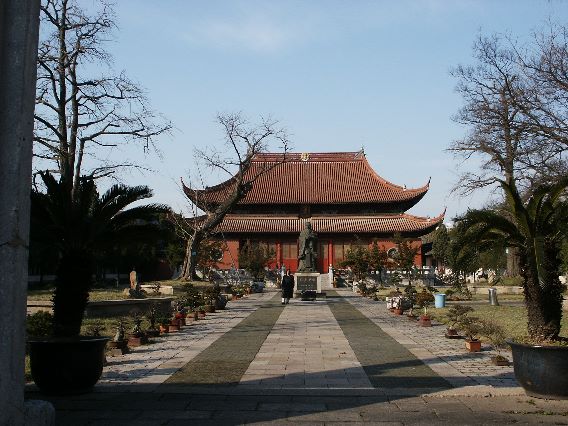 The temple forecourt, with stelae and statuary. 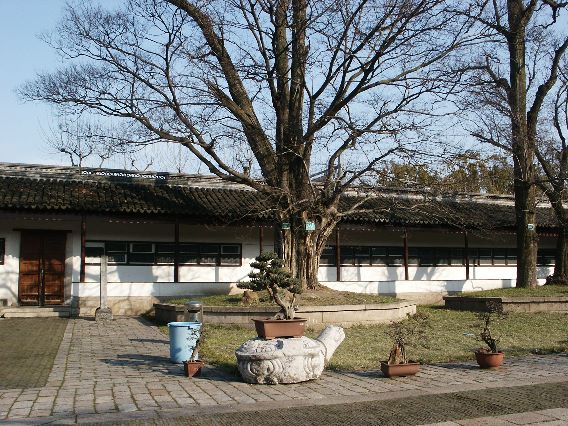 One of the side-galleries of the temple forecourt. Looks amazingly modern, doesn't it? 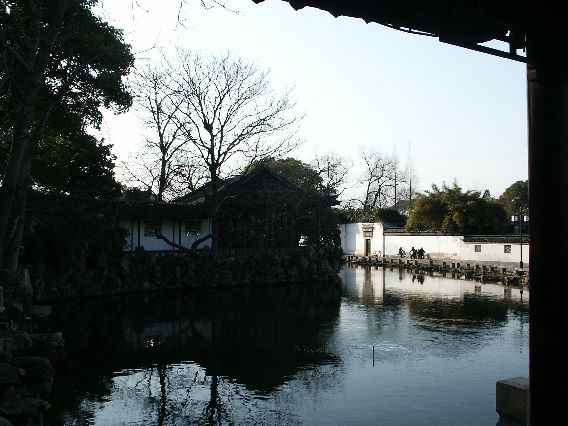 Okay, we're in another estate here, one where our guidebooks disagreed on how to translate the name. The Chinese is Canglang Ting (tsong-long ting), which definitely means "[something] Waves Pavilion," but that something is variously translated as "Calm," "Blue," or "Surging."

It's by far the oldest of Suzhou's classical gardens, dating back over a thousand years to the Northern Song Dynasty, and it's a little wilder and less refined than the later ones. It faces on a canal, and this is a view of the canal from a pavilion designed for, well, looking at the canal. 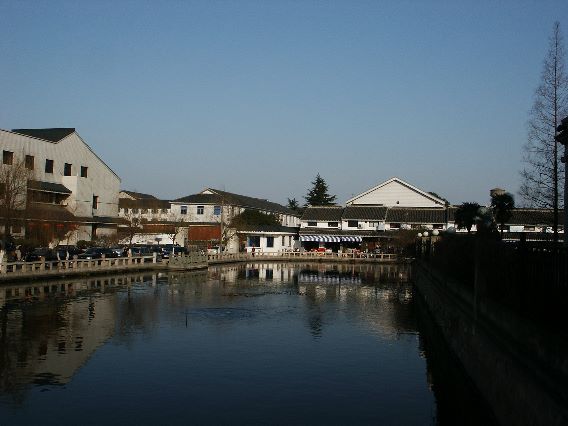 Looking the other way along the canal. The canal is along the north side of the estate. This view is obviously not much like what the builder saw a thousand years ago. 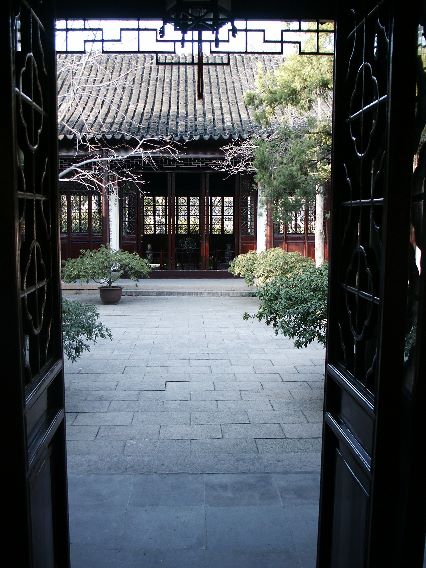 The formal reception area. For several centuries this was a trendy place for sages and scholars and poets to speak, when they were in Suzhou looking to cadge a meal or two. 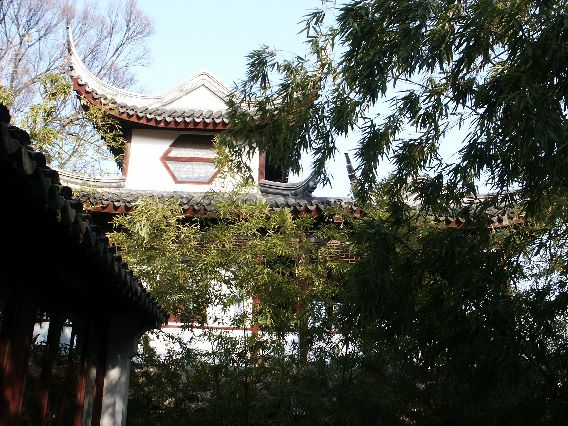 An odd little tower pavilion at the south side of the estate that's not easily accessible from the rest of the place; probably a good place for the owner to go when he wanted to get away from it all. 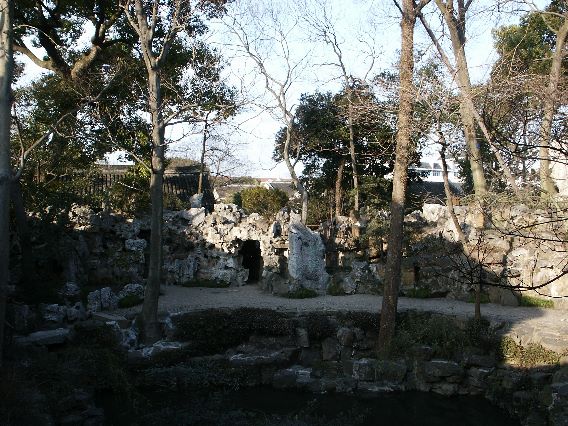 This is part of the central courtyard of the estate -- see what I meant about being wilder than any of the others? 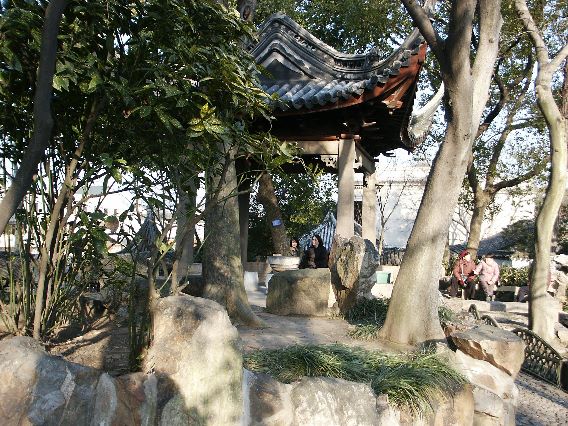 Kiri and Julie sitting in the little hilltop Canglang Pavilion that the estate is named for. 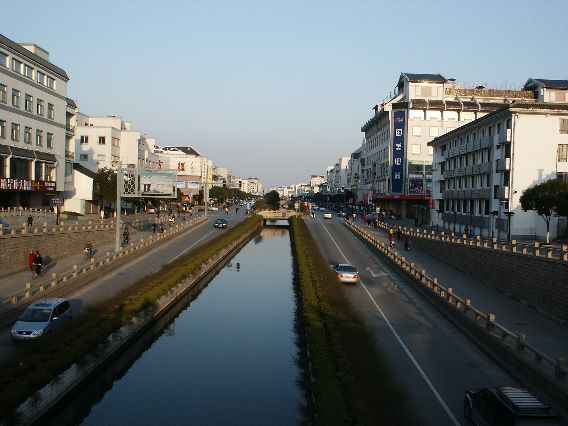 The main east-west highway and canal through the center of Suzhou. What we thought especially interesting here is that the canal is higher than the highways on either side where they went under the bridge we were on. 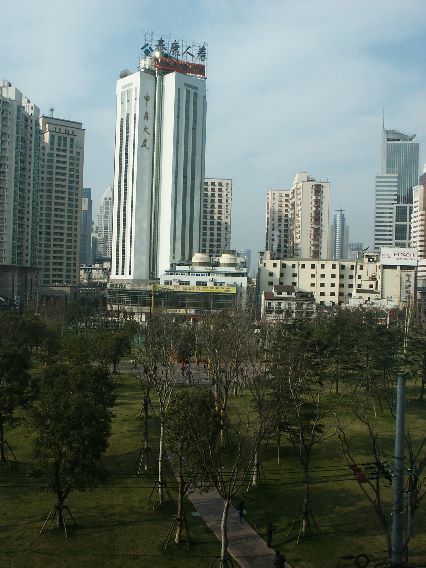 Back to Shanghai: This was the view from our hotel room. That's a comedy club with the yellow sign on the far side of the park. We would often watch people exercising in the park, or doing tai chi, or walking dogs, or playing soccer. 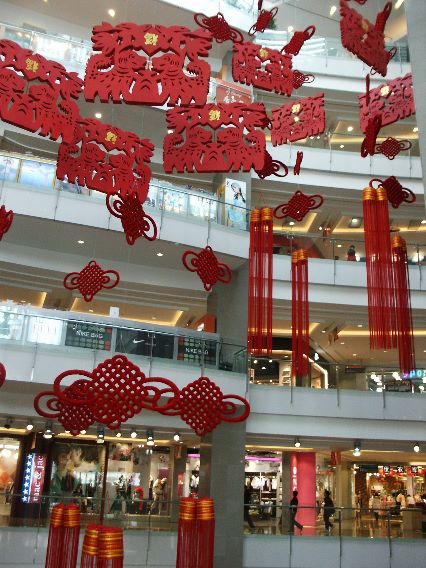 New Year decorations for the Year of the Dog in the grand atrium of the Raffles City department store. We ate lunch in their food court, Megabite, before visiting the Shanghai Museum. 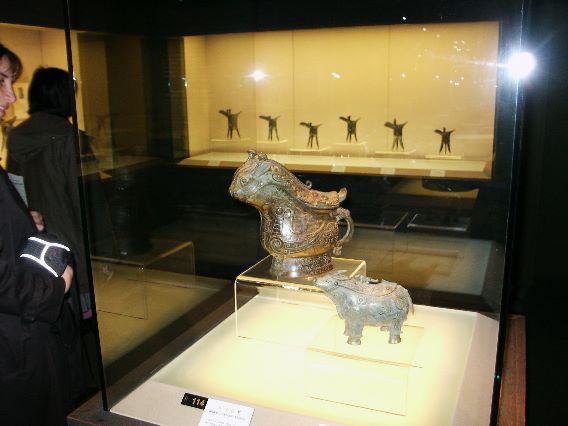 3,000-year-old Shang Dynasty bronze in the Shanghai Museum. We took very few pictures there because (a) several galleries didn't allow photos, (b) a lot of stuff was nifty but not very photogenic, and (c) we were tired. 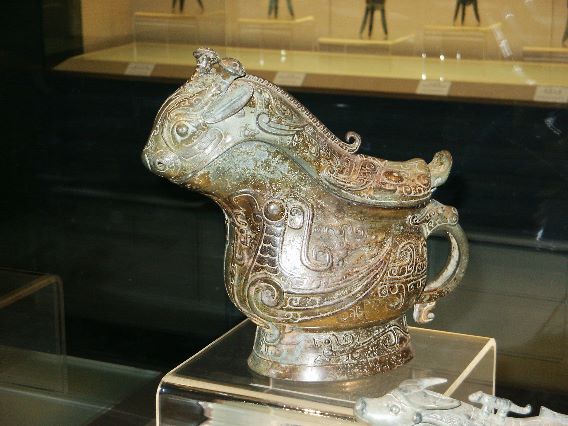 Oh, that's right! Our camera has a zoom lens! 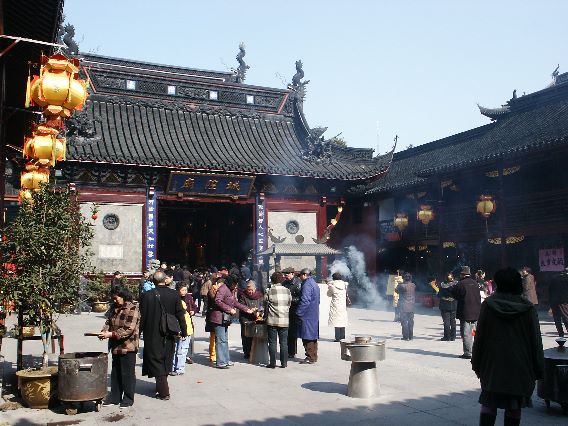 The temple of the city god of Shanghai.

No, really. Absolutely serious. During morning services. Those women there are holding big handfuls of burning incense, bowing to each of the four directions before approaching the altar. 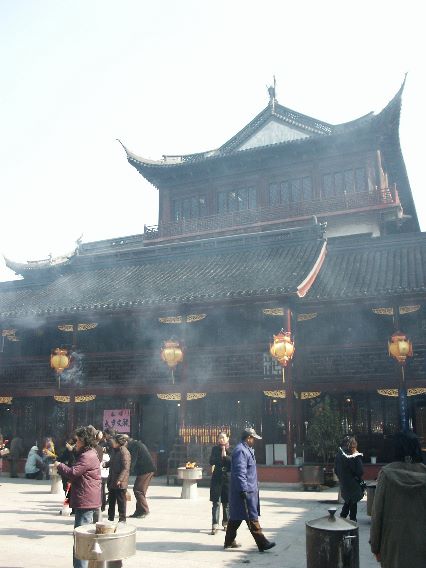 Worshippers, tourists, and clouds of incense in the City God Temple. (The god's name is apparently just Shanghai God, or at least we never saw any evidence otherwise.) The temple is officially classified as Daoist, but I don't know why, as it just looked like pure folk religion to us. 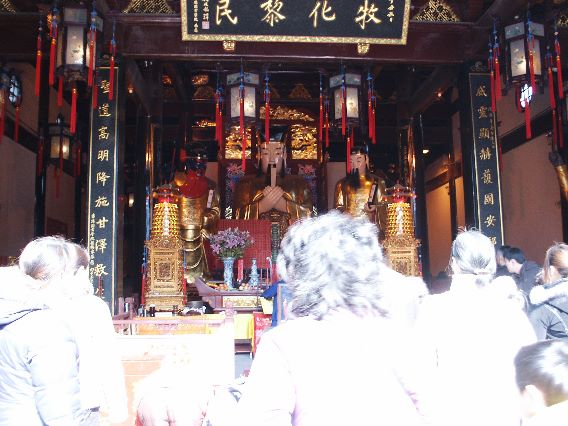 Peering over the sunlit heads of worshippers at the lantern-lit idol and altar of the City God. 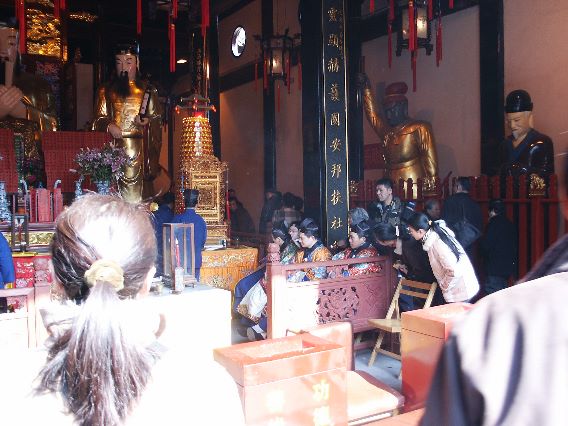 Some of the temple priests, and other temple accoutrements. The standing priests in the blue robes were performing a ritual, but we couldn't see any details. The seated priests had doffed their blue outer robes, revealing the elaborate polychrome ones underneath. Those pinkish things between the crowd and the priests are offering boxes; the three statues in the background are idols of lesser gods. 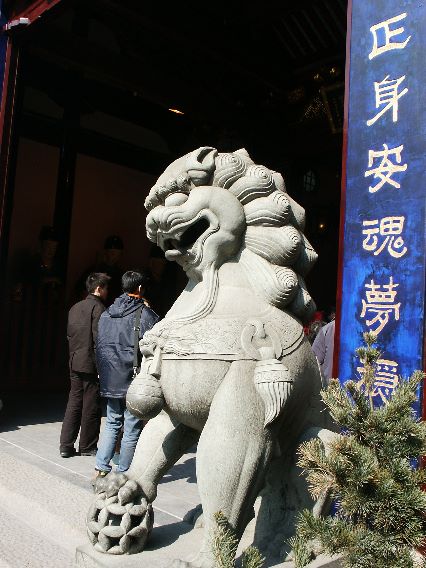 One of the temple's excellent guardian lions. 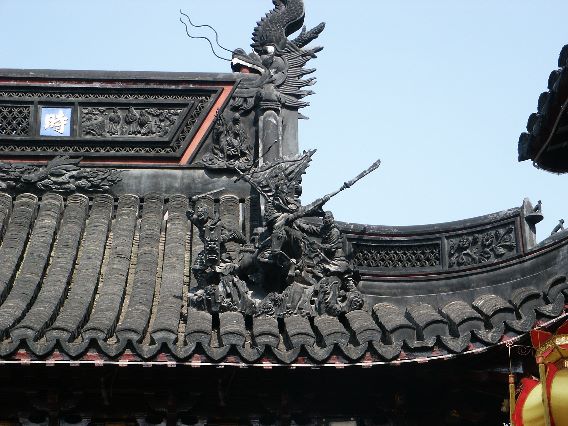 Nifty roof sculptures on the temple. 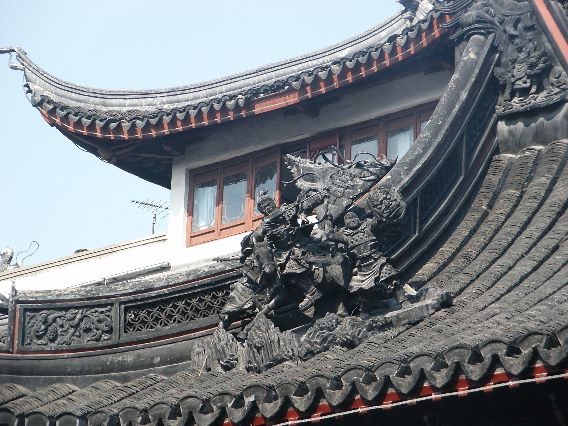 The matching roof sculptures on the other side. 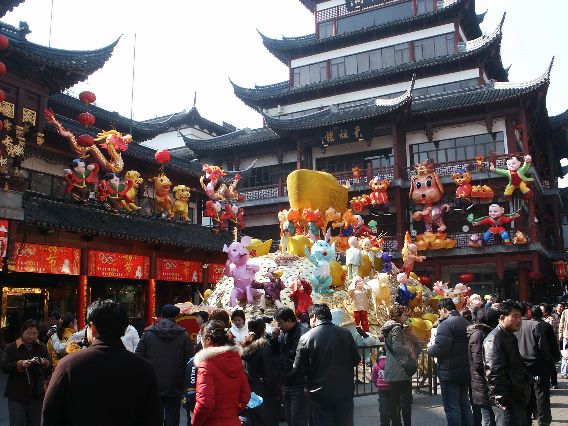 Spring Festival decorations in the Yuyuan Bazaar. A large city block is occupied by Yuyuan (Yu's Garden) itself, the City Temple, Huaxinting Teahouse, and the Yuyuan Bazaar, and most of that space is the Bazaar, which is more or less a shopping mall. 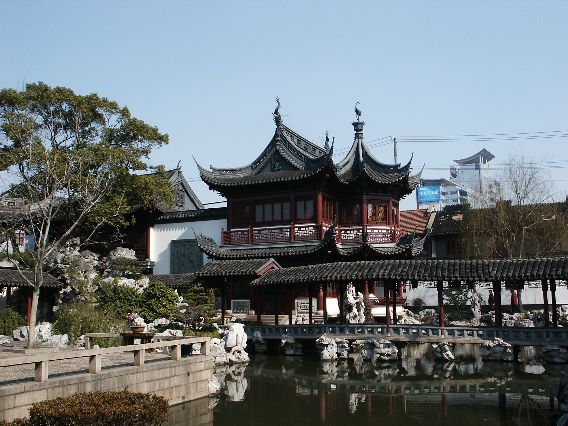 In Yuyuan. Shanghai's premier Ming Dynasty estate is not as splendid or subtle as Suzhou's best, but it still manages to be gorgeous. Notice that it's actually older than Shanghai; the city grew up around it. 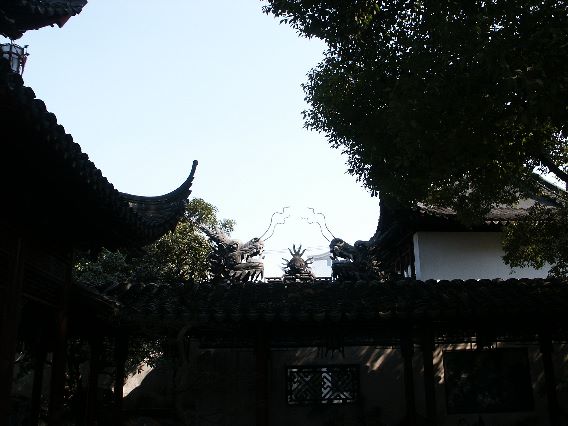 I liked these rooftop dragons.