This page: Arrival, Beijing, and the Forbidden City 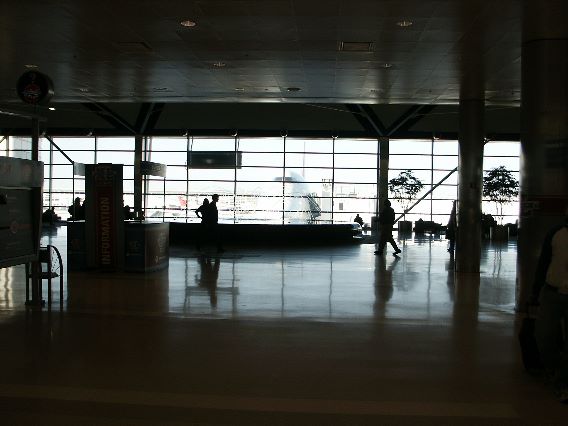 Our route to China was Washington Dulles to Detroit to Tokyo Narita to Beijing; in Detroit our plane to Narita happened to be right behind the spiffy "water effect" in the terminal, so I tried to get a picture but didn't do a very good job. 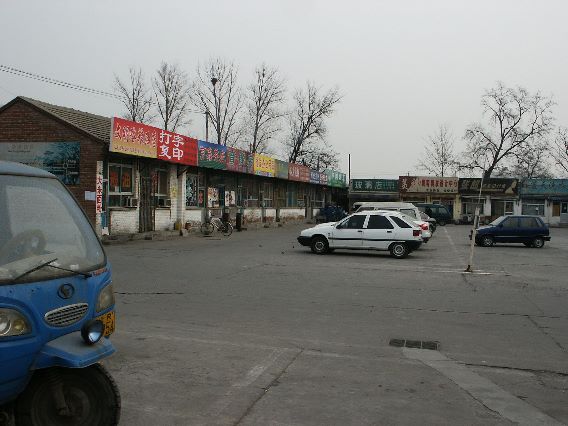 We stayed with the family of one of Julie's former co-workers the first two nights. They live in a compound for foreigners outside Beijing. During our day with them, before picking up Kiri at the train station, we went to the "wet market" in the village of Shunyi to get our first look at "the real China." 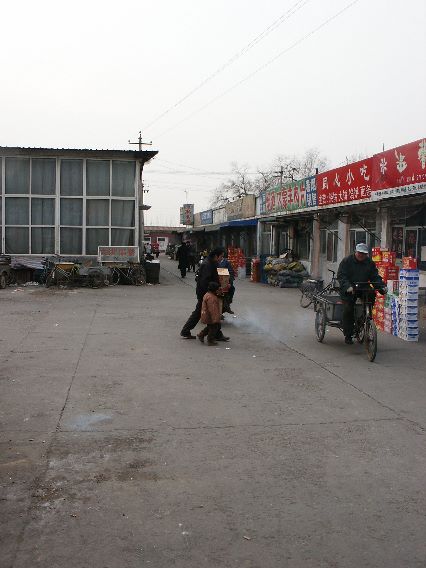 These aren't really very representative shots; I was trying to capture the bright colors of the signs and the contrast with the rather drab buildings, as well as some of the eccentric vehicles in common use. 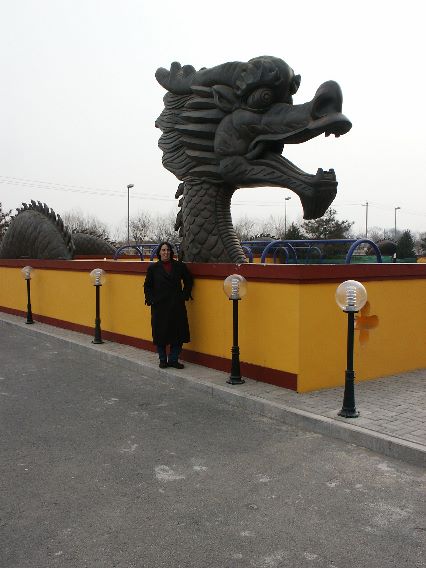 Our hosts' kids attend an international school that's just put in a new playground. We went to check it out. 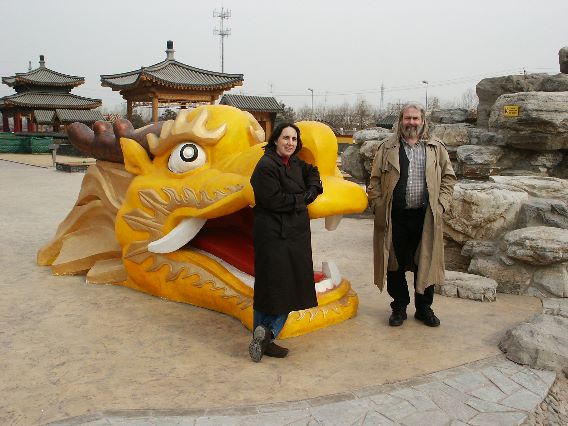 Julie and I at the playground. 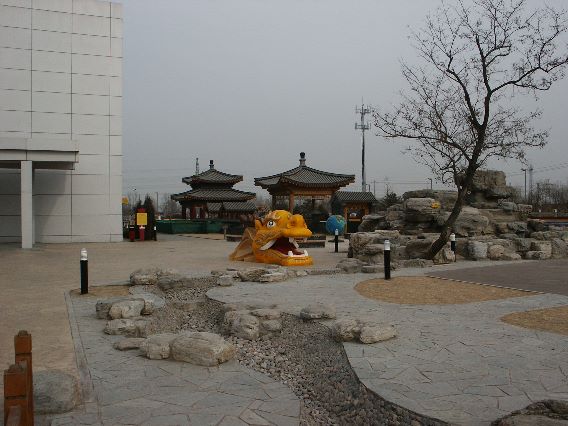 A final long shot of the playground. 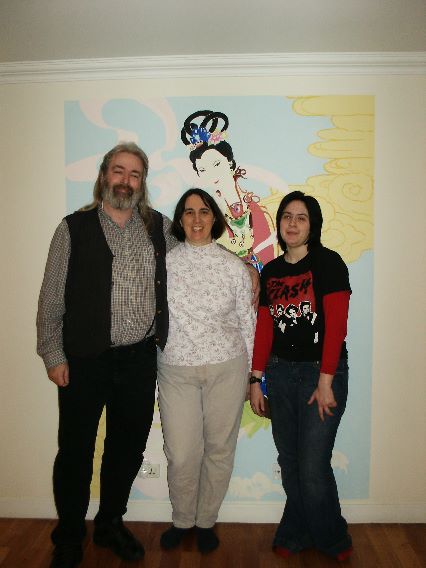 We collected Kiri from the train station, and here the three of us are at our hosts' home in the foreign enclave. (Julie's former co-worker painted that unfinished mural behind us.) 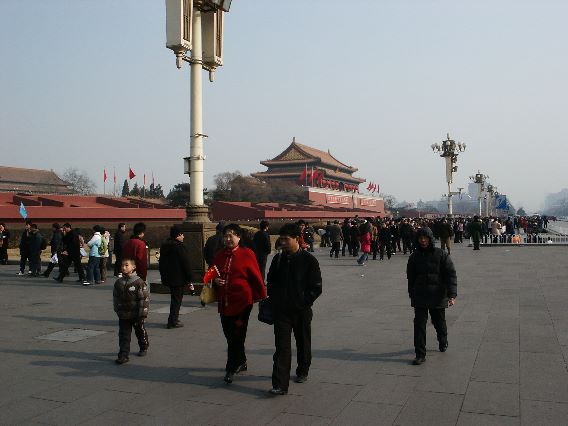 On Tuesday we finally got our act together; our friends dropped us at our hotel, and after we'd checked in we got a cab to Tienanmen Square. Those red boxy constructions on the left are the reviewing stands for the annual May Day parade. 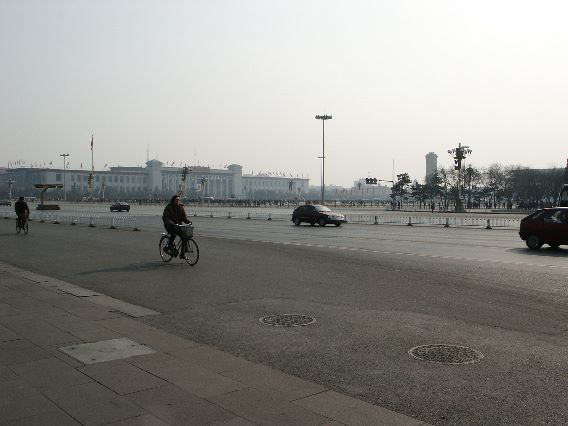 Tienanmen Square is huge, and mostly empty. It's a ceremonial space, and there weren't any ceremonies at the time. 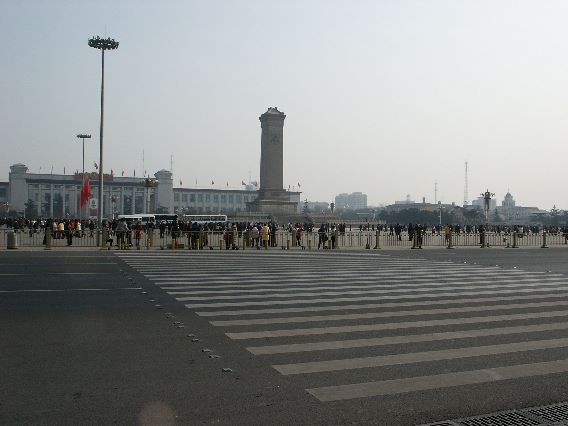 Tienanmen was laid out by the Ming rulers who built Beijing as a single huge open space extending from the city's south gate to the gates of the Forbidden City. Most of it is still exactly that, but with more modern pavement. 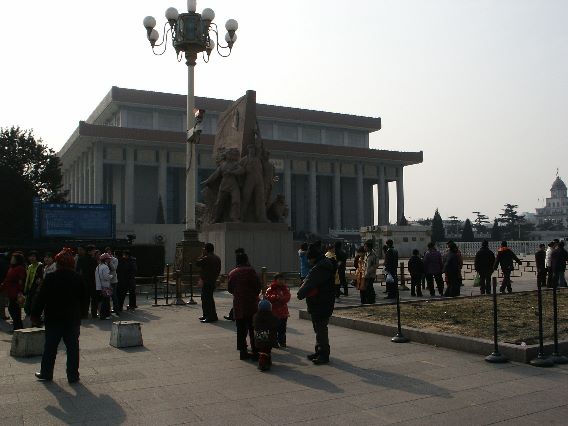 The only structure that really intrudes into the space is Mao's mausoleum. We didn't bother going inside. 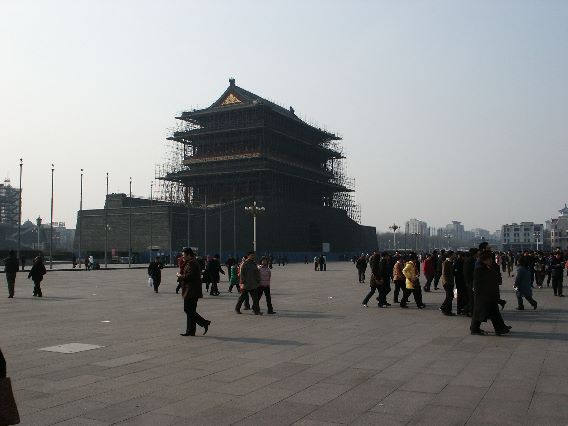 The old Ming Dynasty city gate at the south end of Tienanmen. It was apparently being repaired or restored; we didn't investigate. 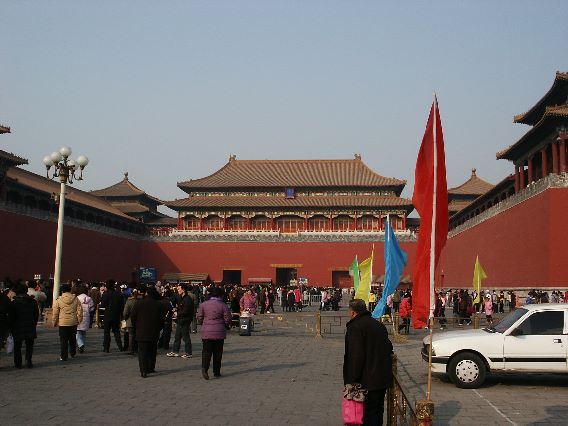 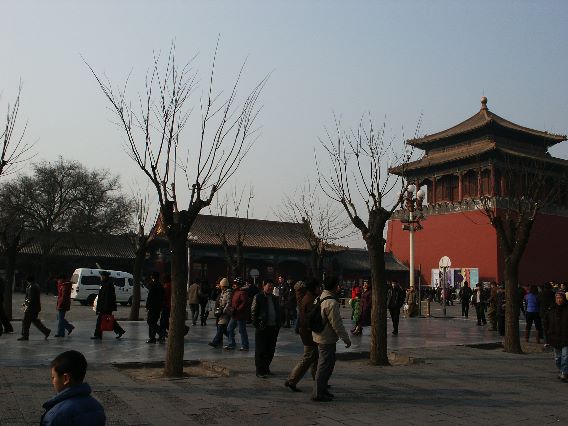 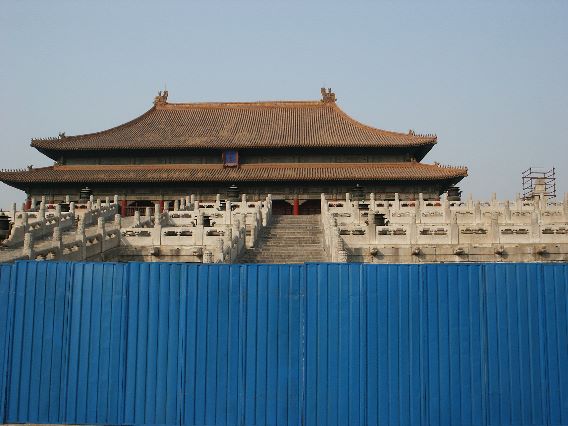 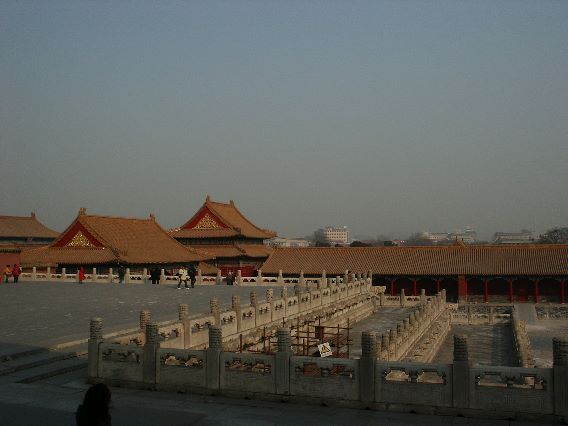 These huge courtyards were made this big for two reasons: To fit the thousands upon thousands of people who worked in the Forbidden City when there were important functions and events, and to impress the hell out of visitors. They worked. 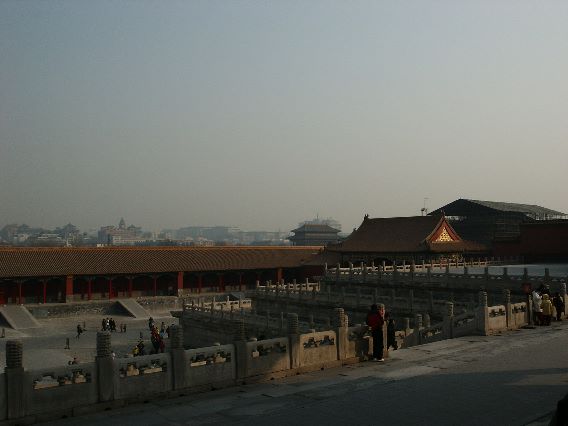 This is the forecourt of the main hall where the emperors held audience -- I forget the name. There were three audience halls, one behind the other, and behind those were the emperor's other buildings. Meanwhile, most of the Forbidden City was hidden away to either side of this gigantic central axis. 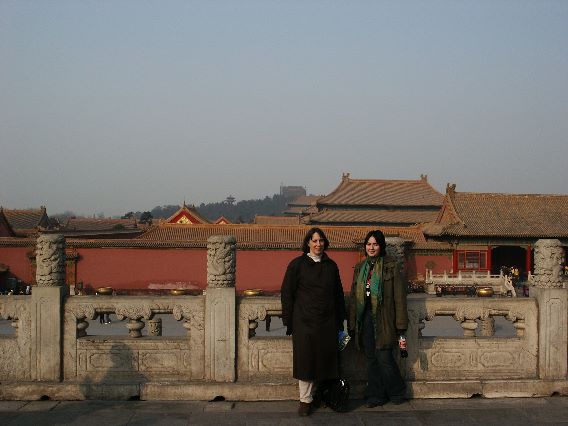 Julie and Kiri, to give you a sense of the scale here. 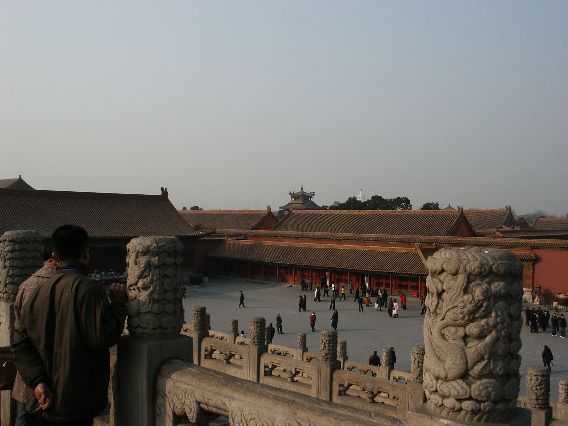 Looking northeastward from one of the audience halls, so you can see some of the roofs of the side-areas where most of the 70,000 inhabitants of the Forbidden City lived. 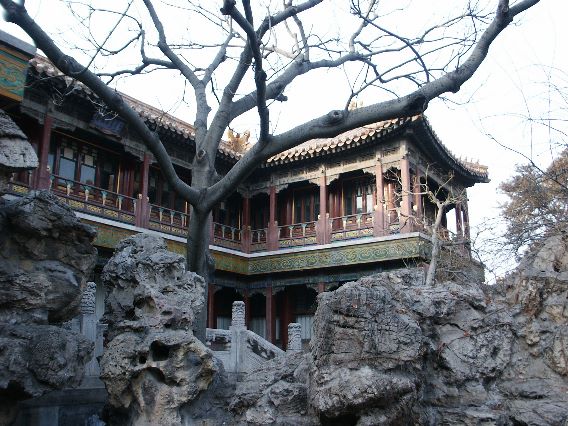 In the Imperial Garden, near the north end of the palace complex. 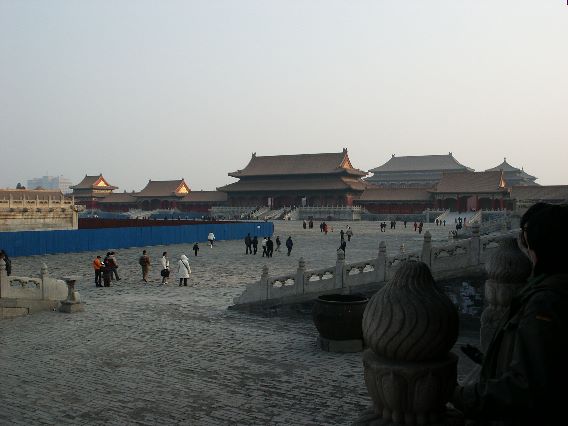 Looking southeast at the gates. 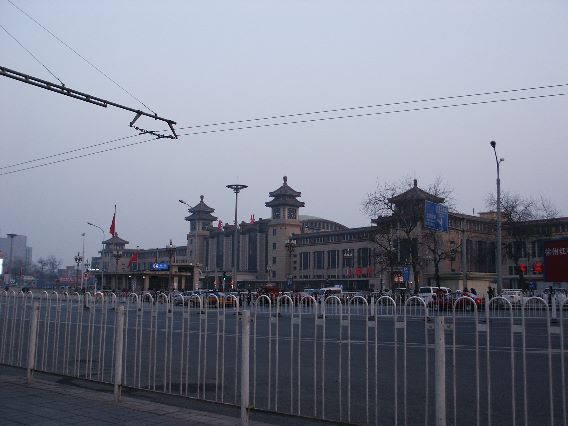 The Beijing Railway Station. We were there buying tickets to Shanghai well in advance; you have to buy them at the station, and if the train you want sells out, you're screwed, so we made sure to get ours early. 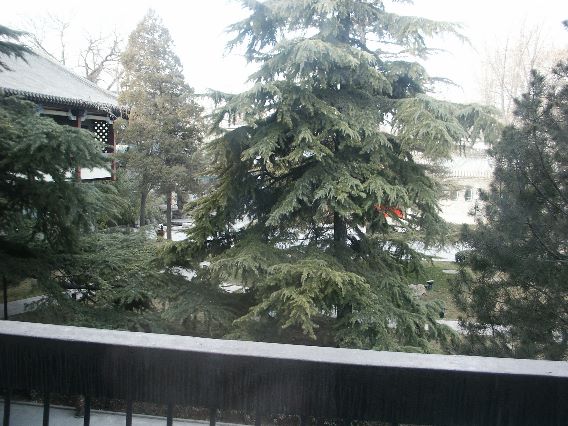 The view from our room at the Bamboo Garden Hotel. It's a splendid hotel that was originally a shiheyuan, a courtyard garden estate, belonging to a mid-level Qing Dynasty official. It's now off a tiny, hard-to-find alley, but still lovely inside. (The old formal entrance has been permanently closed; all access is now through what was originally the service entrance. The alley is a hutong, a sort of urban village; Beijing used to have hundreds of hutongs, but most are gone now.) 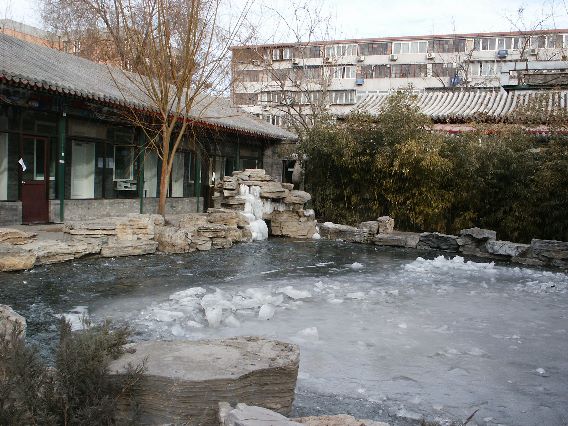 The hotel's ornamental pool, frozen solid. Visiting China in winter does have its drawbacks.