The report consists of the following portions:

Note: This installment has lots of links but few pictures; later installments should reverse this pattern. Note also that I haven't bothered repeating the same link over and over -- the first time I mention something that I thought it appropriate to link I've linked it, but after that it's generally in plain text. A few items are linked more than once; usually (but not always) these links will go different places.

A proper report on our major 1998 vacation has to start well before we actually left, with the initial planning. Return with us now to those thrilling days of yesteryear, specifically February 1998, when we realized we had no plans for spring break, and that the kids might appreciate seeing Disney World again while they're still kids. We haven't been there since 1987, when Kiri was three and Julian one, and they liked Disneyland more than we expected.

So Julie got out the Travel section of the Sunday Washington Post and started browsing through, to see if there were any package deals for Disney or Orlando being offered. She didn't find any -- but she did see an ad for "Didion World Cruises," offering cruises out of Alexandria, VA.

We'd never heard of Didion, nor of cruises out of Alexandria, which is not really much of a port these days (though it was hot stuff in the 18th century). We were intrigued. And one of the cruises offered started in Cancun, and then wound up in Alexandria -- a matter of getting the ship, the M/S Leeward, from its former home port of Miami to its new one (however temporary) in the Potomac.

We hadn't really been planning to take a cruise; that was always in the "it might be nice someday" category. This one looked interesting, though, and was a one-time deal, so... well, Disney World will still be there next year and we couldn't afford both. We sent away for Didion's brochure; it arrived promptly, and after some discussion we went ahead and booked two cabins at the cheapest price listed.

We timed it well; most of the ship was still available, and mid-priced cabins are always a harder sell than the very cheap or really nice ones, so we got bumped up two grades and got a small discount on top of that, and wound up with two inside cabins on Deck 6, amidships.

Rules of thumb we did not know at the time but do now:

The passenger cabins on the Leeward are on decks 2 through 7. Deck 6 amidships is a really good location, except for having no view at all. We lucked out on that.

Not that we knew it at the time. In fact, we didn't know anything about cruise ships beyond what one saw on "Love Boat" and in travel mags. But we had until June to back out if we wanted to, so we didn't worry about it.

Well, obviously we didn't back out. Basically, we got busy and didn't really think about it until we got the reminder that the balance was due and our deposit was no longer fully refundable, which was, oh, early June, I guess. 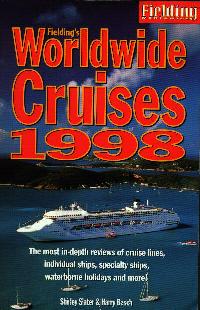 So we paid the balance, and began to poke around to see just what we'd bought. I searched on the Web, and we checked out some travel mags, and Julie got Fielding's Worldwide Cruises 1997 from the library, and we began to read up on cruises in general, and the M/S Leeward in specific.

I would recommend Fielding's, but alas, the series seems to have been discontinued around the turn of the century. The 1997 edition was written by a couple (Shirley Slater and Harry Basch) who wrote a column on cruises for a major L.A. newspaper -- the Times -- so they know their stuff, having taken a few hundred cruises over the past twenty-odd years, and they write a breezy, information-packed piece.

They gave the Leeward four stars out of a possible six, which translates to "above average but not exceptional." It's owned and operated by Norwegian Cruise Lines, a large, established, and entirely respectable outfit currently operating about a dozen ships.

Cruise ships these days range from mere yachts carrying a couple of dozen passengers up to floating cities that dwarf the Titanic. The ones you'll see on the TV ads are mostly in the 1,200-3,000 passenger range -- that is, they're big. The Leeward, at 524 feet and 915 passengers official capacity, is considered medium-sized by Fielding's, and small by a lot of experienced cruise-goers. (The really small ones are so expensive they're generally ignored.)

Didion, incidentally, promised that our cruise would carry no more than 900 passengers, so as not to feel crowded; the Leeward would be below capacity.

Those of you who read Hornblower or the like may wonder why a ship was named "Leeward," when that's the direction you do not want a ship to go, as a general thing. ("Leeward" is roughly equivalent to "downwind.") Well, at the time NCL had a ship named the M/S Dreamward, so they named the Leeward to be a sister ship, and followed it up with the Windward. There was also a Seaward and a Starward. The line later decided to emphasize their Norwegian ties, so the Dreamward has been refitted and renamed the Norwegian Dream, and the Windward has become the Norwegian Wind, and so on. At the time of our cruise they hadn't gotten to the Leeward yet. It was the only ship in the fleet at that point that didn't have "Norway" or "Norwegian" in the name. (Norwegian Dream, Norwegian Wind, etc.) It was never really much of a sister ship to the others anyway; it's a different size and shape.

In fact, we learned from Fielding's that the Leeward was built in Finland for use as a Baltic ferry. The distances between Oslo and Stockholm and Riga don't justify flying, but there aren't any roads, so the Baltic is full of honkin' big ferries, much bigger than anything we call a ferry in North America. The Leeward was one of them -- though her name was different then, first the Viking Saga, then the Sally Albatross.

No one we heard from seemed very clear on how NCL came to acquire a Baltic ferry, but they did, and sent it to Italy to be refitted as a cruise ship. The refit was completed in 1995 -- there's a big plaque on the foredeck about it -- and she was put into service cruising the Gulf of Mexico.

She has an advantage over a lot of cruise ships in that because the Baltic isn't very deep, she's got an unusually flat, shallow bottom and can safely go into ports the big ships can't use -- like Alexandria.

A normal big cruise ship will draw something like twenty-five feet. The Leeward draws eighteen. And the ship channel into Alexandria is all of nineteen and a half feet deep. This sounded rather worrisome, actually, but at least so far that eighteen-inch clearance has been enough.

Also in our research, we turned up more about Didion World Cruises.

Ed Didion is a local travel agent/tour packager here in the Washington area who apparently got frustrated by the lack of cruises out of nearby ports. To book customers on cruises he had to send them to New York or Miami, and why, he asked, should he have to do that when there's a first-rate deep-water port at Baltimore, and a port at Alexandria?

So a few years ago -- '92 or '93, I forget -- after unsuccessfully trying to talk cruise lines into using Alexandria, he leased an entire ship for a couple of months and ran his own cruises out of Alexandria. He paid the cruise line $2.5 million, and came out slightly ahead, even with a small ship (much smaller than the Leeward). So he did it again the following year.

But the year after, there were no cruise ships available for lease -- the cruise business was booming, and the lines could do better on their regular routes than by leasing to Didion. If he had a big ship he might be able to make it worthwhile -- but a big ship can't dock in Alexandria.

And then he came across the Leeward, which had been running three- and four-day Caribbean cruises out of Miami for years, and which has that odd flat-bottomed Baltic-ferry design. NCL's business for the Leeward was down a bit, due to competition from the bigger, newer ships (like the M/S Disney Magic, or some of Carnival's behemoths), and she was unquestionably the biggest ship that could possibly be squeezed into Alexandria, despite being small by Caribbean standards. After much negotiation, Didion got her for two months -- for six million dollars up front, and a split of some sort (I have no idea of the terms) between Didion and NCL on the proceeds.

In short, Ed Didion's entire fortune was riding on the M/S Leeward, which is probably why he was somewhat desperate to fill her and why he kept fiddling with prices and terms in order to get as many passengers signed aboard as he needed to not lose his shirt.

This, at least, is my understanding, from various articles and write-ups we found, and discussions we had on board. I believe ol' Ed did just fine, but I'll bet he had some nervous moments in there.

So, after reading up on the ship and on Didion, it appeared we'd made a pretty good purchase -- except that no one involved had done this before, so things might have some glitches.

Tucked away in the small print had been an option to fly down to Cancun a day, or two, or three, early -- we later discovered that most of the Leeward's passengers never even saw that, but we did, and opted for a two-night stay in Cancun before sailing. We'd seen Cancun before and all liked it.

Didion made all the arrangements, and pretty much took care of everything except getting the kids' passports renewed -- I'd forgotten that minors only get five-year passports. Mexico and the Bahamas didn't require passports, but they wanted government-issued photo ID, so we went ahead and got the kids' passports renewed by going into Washington and wasting an afternoon at the passport office. (Well, I did, anyway; Julie was at work.)

There were all the usual last-minute preparations -- stopping the mail and the newspaper, asking the neighbors to tend the cat and the hamster, leaving Spot with Julian's friend Schuyler, filling out immigration forms and luggage tags and so on. And packing, of course -- packing for ten days and including clothes for the ship's "formal" nights. (We knew there would be one or two. There were two.)

We had no experience with cruise ships, but we knew it would be hot most of the time, which simplified deciding what clothes to take.

One catch about letting Didion make the arrangements -- our flight left National Airport at 9:00 a.m. Gaah. And they tell you to be at the airport two hours ahead of your scheduled departure for international flights.

They don't mean it, though -- ninety minutes is plenty. So we loaded the car Saturday night after celebrating my birthday (since we wouldn't be around to eat leftover cake we used cupcakes this year), went to bed, arose at 6:40, piled into the car, and drove to the airport.

We later discovered that most of the flights were out of Dulles, which is thirty miles from Alexandria, where National is almost in Alexandria; we were lucky.

This concludes Part One. Links to the other parts of this trip report are below:

The next installment is Three days in Cancun; here's the complete list: