Introduction: In July and August 1998, the four of us took what was at the time the most expensive vacation of our lives. This page is Part Five of a report on that vacation.

This was all written back in 1998 and 1999. For the most part, other than updating links, the text below has not been brought up to date. References to "now" or "soon" or whatever are all as of 1998. In one or two places, however, I've noted changes in green. Photos have been retouched, but not re-scanned -- the originals were film, not digital, and the scanner used to transfer them back in 1998 wasn't very good.

Note: I haven't bothered repeating the same link over and over, but several may be repeated from one installment of the report to the next. Usually, the first time on each page I mention something that I thought it appropriate to link, I've linked it, but after that it's generally in plain text. A few items are linked more than once; usually (but not always) these links will go different places. 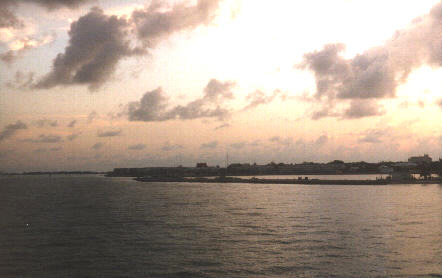 My image of Key West wasn't particularly positive. I'd thought of it as a rather disreputable place that accumulated losers and ne'er-do-wells until the causeway extended U.S. 1 there, whereupon it became an over-commercialized tourist trap. I also had the idea that most of the tourist stuff was Hemingway-related, and while I admire Hemingway's ability to write sharp, clean prose, I always thought of the man himself as a jerk, and the uses he put his writing ability to as tedious. So we weren't expecting much.

Julie's image, incidentally, may have been different from my own -- she mostly seemed to see it as a chance to sit on another beach for awhile.

We were both wrong.

We got up fairly early -- just the two of us; the kids slept in -- and watched the ship come into port. There are two docks in Key West that can accommodate cruise ships, the Mallory Dock and the Truman Dock, and the Leeward had dibs on the good one, the Mallory Dock, which is right on Mallory Square, in the center of town. (Right behind us was another ship -- the M/S Sovereign of the Seas, if I remember correctly -- that got the other one.) 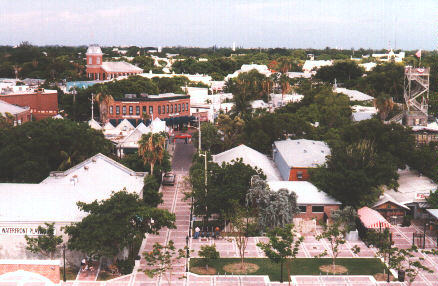 The view from the ship, as we pulled in, was not what I had expected. Mallory Square is a clean, modern square, paved mostly in brick, with trees and benches scattered about -- there's nothing either disreputable or touristy about it, really. Certainly not compared with, say, Cozumel, which was extremely touristy and slightly disreputable. There are shops and restaurants around it, but all fairly subdued -- more like, say, Rockport or Williamsburg than like Cozumel.

So we got the kids up, went to breakfast, and went ashore, not in any hurry about it. The map we'd been given showed South Beach as the nearest beach, and our plan was to spend the morning on a beach, then come into town for lunch and touristing.

To get to South Beach, one simply walks down Duval Street, the town's main drag, all the way across the island -- just over a mile. So we did. We stopped in a couple of shops along the way -- in particular, one with a massive window display of toy flamingos caught our attention -- but mostly just walked, passing things like Southernmost Motel (the southernmost motel in the continental U.S.), until we reached South Beach. 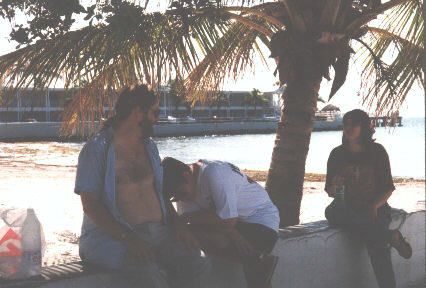 South Beach is scuzzy. I can't think of a better word for it. It's wedged between a breakwater and a pier with a restaurant on it, it's small, covered with seaweed, and exceptionally unpicturesque. It's the southernmost public beach in the continental U.S., but it's still scuzzy and unattractive, and we decided we didn't want to swim there after all.

Later we were informed that there's a nice beach in Fort Taylor State Park, at the west end of the island, but that was later. It wasn't marked on our map, and we never got there. Instead we turned around and headed back up Duval Street.

Walking back up Duval Street we took our time, stopping in shops now and then. We inquired about parasailing at a little roadside stall, but it seemed unlikely we'd be able to do anything about it, even though the price was actually a bit better than in Cancun. We stopped back in and bought a bagful of stuffed flamingos, and elsewhere I bought a very spiffy Aloha shirt (which I happen to be wearing in the picture of Deck 11 in the previous installment) with flamingos all over it -- we were just in a flamingo sort of mood.

We didn't buy anything at Wings of Imagination, but it was definitely worth a look -- it's a shop that sells displays of mounted tropical butterflies, all guaranteed ranch-raised and allowed to live out their natural ten-day (or so) lifespans. Some of them are really spectacular.

And then it was lunchtime, and we saw a place called Crabby Dick's upstairs from a row of shops, and although it had a broad terrace, the indoor portion had air conditioning, which we were ready for. So we ate there.

The local specialty in Key West is conch (pronounced "conk"), so I tried the conch fritters. Conch itself doesn't taste like much -- sort of like bland scallops -- but these were, to my mind, over-spiced. Everyone else reported their meal to be excellent, though.

After lunch we headed to the Hemingway house -- not because we're Hemingway fans, but because we wanted to see the famous population of cats. At last count there are fifty-five cats living there, about half of them polydactyl, all of them descended from the dozens the Hemingways kept. (And yes, they do spay most of the females, just keeping a couple in each generation as breeding stock.)

The house itself is not particularly exciting -- it's a middling-small example of tropical-plantation architecture. It has some splendid banyans around it, though, and the guide did have several good anecdotes about the Hemingways.

And yes, we saw lots of cats, polydactyl and otherwise, at the Hemingway house. They're hard to avoid. A few of them have their own little houses here and there about the yard. Most are big rangy critters, neither especially aloof nor especially friendly -- they'll allow petting but don't go looking for it.

You'll notice I've mostly spoken about shopping in Key West -- or at least, so it seems to me. This is a reasonably accurate representation of how we spent our time, but not of the town, let alone the island as a whole -- there are several nifty little museums and attractions scattered about. There are at least two museums dedicated to the wreckers who once thrived there -- the waters just south of Key West, in the passage between the Keys and Cuba, are remarkably treacherous, and the inhabitants of Key West regularly picked up extra money by salvaging cargo and fittings from wrecks.

We had intended to visit at least one of these museums, but upon arriving at the door, taking into consideration the time, its appearance, and the amount of the admission charge, we changed our minds. 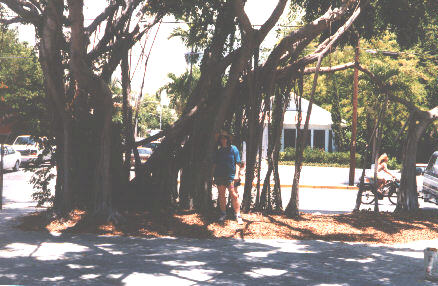 The kids had never seen banyan trees before, or at least didn't remember any, and Key West has lots of them, so those were much admired. The Victorian-tropical architecture also drew appreciation.

We stopped at the post office, a very ordinary modern building, to mail a post card and call my cousin Chris, who would be meeting us in Port Canaveral; it had a splendid banyan out front, but could otherwise just as well have been in Iowa.

We ignored the entrances to two more museums -- Truman's Little White House and Mel Fisher's Museum of Underwater Archeology -- but checked out Gaspara's Toy Box, a pleasant little toy shop (now out of business), and spent some time just sitting on a bench admiring the weather and the scenery. Key West is really a very pretty place -- not at all what I'd expected -- even if the beaches aren't much. 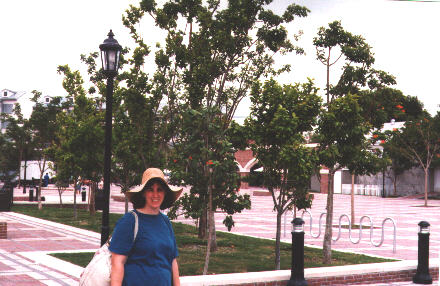 It's clean, sunny, tidy -- I'd expected something like an American Cozumel, and it ain't.

We strolled through the Clinton Square Market -- an old fish market that's been converted into a shopping mall -- and stopped at the Blue Cat, a shop dedicated entirely to cat- and dog-related merchandise. That brought us to the Key West Aquarium.

The Key West Aquarium, built in 1934, was the first official tourist attraction on the island, and one of the first commercial aquaria in the U.S. It's small and old-fashioned compared to something like the National Aquarium in Baltimore, or the New England Aquarium in Boston, but it makes up for it in funkiness and accessibility. There are regular guided tours, and the waiting area is around the "touch" tank, where you're welcome to pick up queen conchs or horseshoe crabs and check 'em out, up close and personal. Other stuff, too -- those are just the biggest and most spectacular critters in the tank. 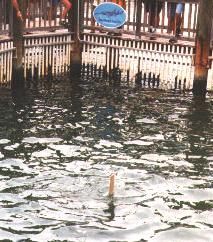 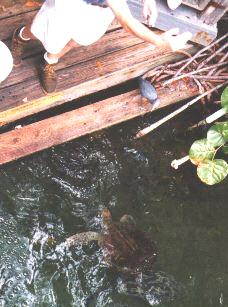 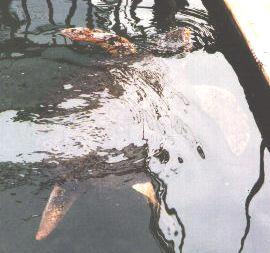 Each tour includes feedings for the stingrays and sharks. It's pretty neat -- and funny -- to see a stingray so eager for a tidbit that it tries to jump out of its tank, "wings" rippling wildly and uselessly in air. Visitors get to feel a shark's tail -- the guides haul a nurse shark up out of the tank for this. (Sharks feel smooth and soft, almost velvety.) 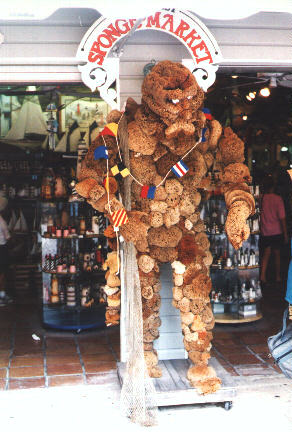 This aquarium makes no pretense of providing a "natural" environment for their livestock, but that doesn't mean they abuse them; they were very careful not to let anyone harm the shark, or any of the other critters, and seemed genuinely considerate of their charges' comfort.

They specialize in sharks, probably because they draw customers -- besides the tank of nurse sharks they've got sawfish, barracudas, a hammerhead, etc. They've also got a couple of very impressive sea turtles.

They also fed a bull shark, a lemon shark, some barracuda... but those they don't let the visitors get real close. The bull shark was so fast I didn't really even see it -- I blinked, and the fish the guide had thrown was gone.

(Kiri, sitting behind me as I wrote this report, remarked, "They have a fun aquarium. But it's little.")

By the time we finished at the aquarium we only had half an hour or so before we were supposed to be back aboard the ship, so we just took a quick look at the open-air market between the Aquarium and Mallory Square. There's an amazing sponge market there, with a sort of cigar-store-Indian figure in front made entirely of sponges. The Sponge Man is between seven and eight feet tall, I'd estimate, and quite nifty -- I got a pretty good photo of him, as you can see. 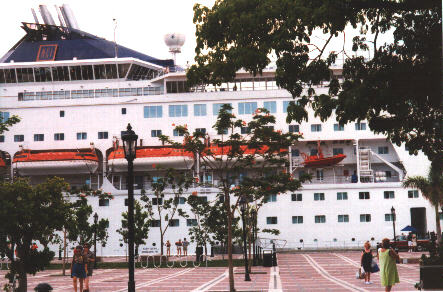 And then back aboard the Leeward, and out to sea, and we weren't able to stay for the daily sunset festival held in Mallory Square.

After leaving Key West we just did more of the same shipboard stuff; that night's show in the Stardust Lounge was Glenn Smith, a musician -- we didn't attend.

(Kiri asks, "Was that the night with the lightning?" I don't think it was -- but Kiri does. I'm not sure. Might've been the night before. Anyway, whichever it was, one night we passed a thunderstorm. It didn't touch us, it was way off in the distance mostly, but we watched the lightning in the distance. A sort of natural light show. Pretty cool.)

This concludes Part Five. Links to the other parts of this trip report are below: 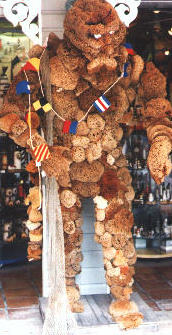