Introduction: In July and August 1998, the four of us took what was up to that point the most expensive vacation of our lives. This page is Part Six of a report on that vacation.

This was all written back in 1998 and 1999. Other than updating links, the text below has not been brought up to date. References to "now" or "soon" or whatever are all as of 1998. Photos have been retouched, but not re-scanned -- the originals were film, not digital, and the scanner used to transfer them back in 1998 wasn't very good.

Note: I haven't bothered repeating the same link over and over, but several may be repeated from one installment of the report to the next. Usually, the first time on each page I mention something that I thought it appropriate to link, I've linked it, but after that it's generally in plain text. A few items are linked more than once; usually (but not always) these links will go different places.

The next day was our stop in the Bahamas, at Great Stirrup Cay.

Great Stirrup Cay is an uninhabited island owned by Norwegian Cruise Lines; when we arrived there we could see another cruise ship nearby, but that was at Little Stirrup Cay (also known as CoCo Cay), which is owned by Royal Caribbean Cruises. Turns out several of the cruise lines own islands in this particular area -- none of them have drinkable water, so they aren't any use for permanent habitation, but they've got splendid beaches, and range up to a mile or two long.

I'd read about this island in the brochure and thought it probably would be a disappointment, but it wasn't. It actually lived up to the hype. 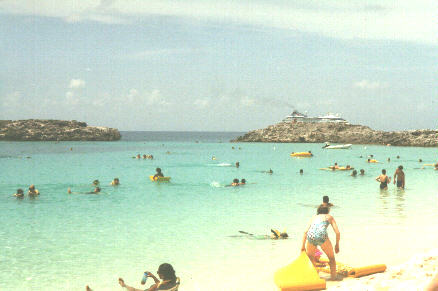 We didn't dock; there is no dock. The ship anchored offshore, outside the reef. Reef, you say -- what reef? Well, that's where these islands came from, I guess. The beach is on a sort of lagoon, an oval with beach on one side and exposed coral reef on most of the other. The reef stands about ten feet out of the water, and has a break in the middle; it connects to the island at one end, so you could walk right out onto it, while the other end of the lagoon is open to the sea.

There's a tender -- it's based on an inhabited island nearby, and comes over for the day, bringing a batch of Bahamians who help set up the facilities and who run a tiny little market selling T-shirts, souvenirs, and so on once the guests arrive. It then shuttles passengers to and from the ship.

It's much smaller than the tender at Cozumel -- two decks, holds maybe a hundred, a hundred and fifty people, tops. There was a ticket system for passage to the island, since it would take several trips, and Julie (who got up earliest) snagged us tickets -- two for the first trip, two for the second. She and Julian took the first; Kiri and I slept later and took the second.

It loaded down on Deck 2, just as at Cozumel, but it didn't dock. There is no dock. Instead it simply ran ashore on the beach, whereupon ramps were lowered and everyone was herded off.

And there we were on the island. 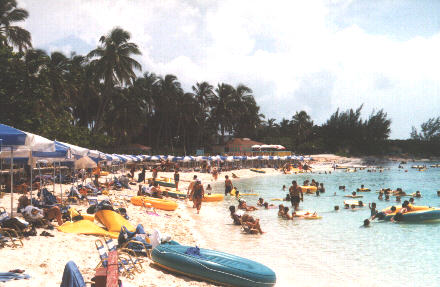 The beach on Great Stirrup Cay is a long, graceful arc of golden sand, with a low stone wall around the top, and a couple of rows of beach chairs and umbrellas stretching all across its full length. The water is warm and bright -- not quite that vivid Caribbean blue, but close. Above the wall are paths and palm trees, a clearing suitable for volleyball or other beach games, and the few buildings the cruise line has installed.

Only the bar and the restrooms have walls; the kitchens and shops are open on all sides. The shops are manned by Bahamians -- mostly cheerful plump black women -- while the bar and kitchens are staffed by the ship's crew. Food and drink were hauled over from the ship before they started bringing the passengers; nothing's stored on the island.

All the buildings put together would be maybe the size of my house; we're not talking about a lot of structures here.

Oh, and there was the bandstand -- I almost forgot. Can't have a proper beach party without music, so one of the ship's bands (I think, altogether, the ship carried three bands) was set up and playing by the time Kiri and I got there.

Lunch was served on the island, cafeteria-style -- hamburgers and hot dogs and fried chicken, with a few fancier dishes as well as the usual picnic food. We ate at a picnic table right near where the tender unloaded.

We bought a couple of things -- I got a spiffy Bahamian shirt, mostly pink and black (and later saw two different men on the ship wearing similar shirts in blue and black). Mostly, though, we played in the water.

They had rafts for rent -- round inflatables of a size for one person to spread out luxuriantly on, or four kids to sit in. And floating mats, which we got two of, and the kids paddled out on those. 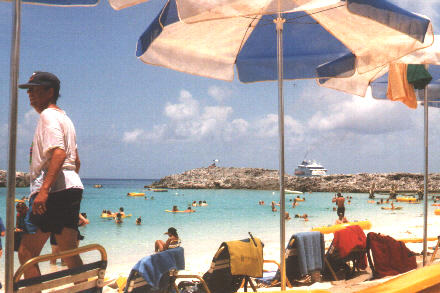 There was a shipwreck to investigate -- a very small one, just a rowboat, really, but it had a buoy marking it, and the kids went to take a look. There was the reef to visit. There was plenty of sea-life -- though the huge influx of people scared much of it away; Julian, by virtue of being practically the first person in the water, was able to get a close look at what he thought was a manta ray and a sea turtle that fled to deeper water before Kiri and I arrived.

I did encounter a stingray, though -- it was cruising along near the beach, and people were hastily getting out of its way. Stingrays aren't aggressive, but they do defend themselves if stepped on, and the sting can be nasty.

The water was shallow and warm and clean.

It was, in short, just about the most perfect beach visit I can imagine -- until we started to burn, anyway. We'd all slathered on sunscreen, but that only does so much. Julie had a little ultraviolet sensor she'd picked up somewhere that measured the sunlight intensity as "High," and on the edge of "Extreme," which is the top category.

Somewhere around midafternoon I looked out at the kids -- I was staying fairly close in-shore, since I can't swim worth a damn -- and realized Julian was starting to look pink, so I called him in and got a towel over his shoulders. He and I took the next tender back to the ship; Julie and Kiri got the one after. All of us wound up with sunburn in various places, but none of it at all severe; usually I toast pretty good, but I'd been careful, and just got some pink on my shoulders, the least of the four of us.

It was just beautiful, though. And not crowded -- one advantage of the Leeward. Yes, we probably had seven or eight hundred people on the beach and in the water, but there was enough space that that wasn't bad at all. Being there with 2,000 other folks, on the Norway or one of the other big ships, or being there when there are two ships in (which apparently does happen), would be much less fun.

It may have been the single best day of the entire vacation.

Once we left Great Stirrup Cay the ship put on some speed, as it was a goodly ways to Port Canaveral, our next stop. We passed Grand Bahama, and had, I'm told, a good view of the lights of Nassau -- but I didn't see it, as I happened to be doing something on the other side of the ship at the time (probably losing money in the casino, but I'm not sure) and no one thought to tell me.

That night's show in the Stardust Lounge was a stand-up comic, Ralph Achilles. Julie, Kiri, and I went; Julian wasn't interested (he was tired and sunburned and just stayed in his cabin). It was a pretty good show. I'd been slightly concerned about bringing Kiri, but the show wasn't X-rated, by any means -- maybe a soft R, at most -- and despite most of his material being about marriage and middle age, Kiri laughed at most of the guy's jokes. Julie, I think, laughed at all of them.

It was pretty familiar, mainstream humor, where I tend to like edgier stuff, but it was a good show.

This concludes Part Six. Links to the other parts of this trip report are below:

The Leeward, beyond the reef