We've always kept cats -- when I was a kid my parents had anywhere from one to fourteen cats at a time. When Julie and I first got married we had a big orange fellow named Sherman; when his kidneys gave out we replaced him with two kittens, Willet Byte and Duzzy Byte, who kept us company for a long time. Duzzy died of a heart attack in 1992, and in 1996 Willet succumbed to feline leukemia. (Yes, he'd been vaccinated. The vaccine is only 85% effective.)

This left us catless, which was obviously intolerable, but we put off adopting a new one until we were sure enough time had lapsed to ensure no lingering leukemia virus was around, and until we'd finished all the traveling we did in 1997.

In August 1997, though, when we got back from our summer vacation, we went to the SPCA and adopted Chanel.

Chanel and her sister Coco (who was adopted before we got there) were born in April, and spent part of their kittenhood living with a colony of feral cats in a storm drain at the Red Mill Shopping Center. The SPCA folks tell us that poor Chanel had lots of interesting parasites when she was rescued -- as well as the inevitable fleas she had ear mites, and some sort of parasitic grub encysted on her throat... ick.

By the time we got her these had all been dealt with -- it took surgery to remove the grub, and the scar persisted for over a year under her fur. She was sleek and friendly; she let us pick her up and pet her immediately, and generally seemed pretty mellow. We picked her to adopt from the half-dozen possibilities the SPCA offered us.

Appearances can be deceiving. She's as active as any normal cat her age, and "mellow" is not the best word for it. She's playful and friendly, loves to be petted -- she has this trick of running in front of me and then falling over to indicate she wants attention..... 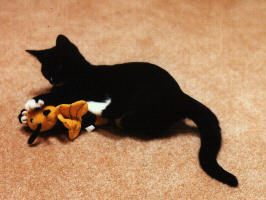 The above was written when Chanel was a relatively new member of the household. Since then she's settled in, grown up some -- but she's still affectionate and playful. She's fond of climbing up on Julie's shoulders and riding around, as shown in a couple of the new pictures, and she likes to play "fetch" with certain toys. She spends most mornings on the daybed in my office, alternately snoozing and watching the squirrels out the office window. She has several favorite toys; one is a stuffed bee, seen in the photo on the right, that she carries around and growls over in a way she doesn't with any other plaything. 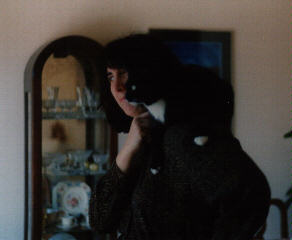 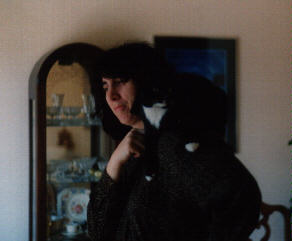 She's a good cat, and we hope to have her around for a long, long time.

(In that central picture above, that's Chanel skidding at high speed across hard floor as she catches a plastic bottle on the bounce. In the picture below right she's bringing it back for another throw.) 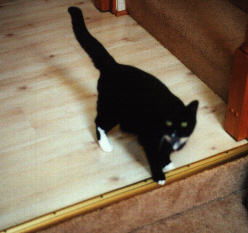 Chanel is still here, a decade later, but she's grown fat and lazy -- very fat, unfortunately. She's recently had skin problems that appear to be the result of a food allergy, so there may have been issues we weren't aware of.

She's still pleasant company, though. She tends to spend her days sitting by the window in our bedroom, rather than my office, these days -- the daybed got cluttered and I play music louder than she likes -- so I don't see as much of her as I used to, but it's a rare evening when she doesn't curl up with Julie for some petting. 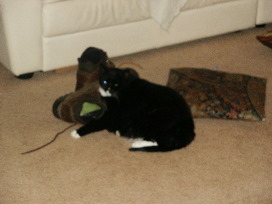 She doesn't climb on shoulders anymore; she's too big. We like her anyway.

You may have also noticed that her fur is so very black that it's hard to get a good photo of her. She absorbs light, she doesn't reflect it. Sometimes she looks more like a hole in the universe than like a cat, though the white toes and chin sort of spoil the effect.

Alas, Chanel is gone. I came downstairs Wednesday morning to find her on the hall rug, in one of her customary positions, but she didn't look up at my approach, or move at all. She wasn't breathing. From the feel of her body, I'd guess she'd been dead an hour or so.

Julie said she was fine at breakfast, and there was no sign she'd been in any discomfort, so whatever killed her -- the vet thinks it was probably a blood clot -- it was quick, and probably painless. She'd recently (that is, in the last year or so) developed a heart murmur, which might have been related.

In recent months she'd been a little more affectionate with me than sometimes in the past, and had developed a habit of curling up behind my leg on the living room couch. Julie thought that was cute, and took a couple of photos on February 5th, which I'm posting below. These are the last two pictures we'll ever have of Chanel.

She was usually more Julie's cat than mine, but I liked her, and I miss her. I still sometimes expect to see her when I pass her favorite haunts, but it's only been a couple of days.

She was about three weeks short of her fifteenth birthday -- by no means a young cat, but not as old as we'd hoped she'd be.

We had been on vacation the week before. At least we got home while she was still alive. She was very happy to have us back -- didn't do any of that aloof "Who needs you?" act that cats sometimes do when they feel they've been neglected -- so she got plenty of petting and attention her last couple of days. I'm glad of that. 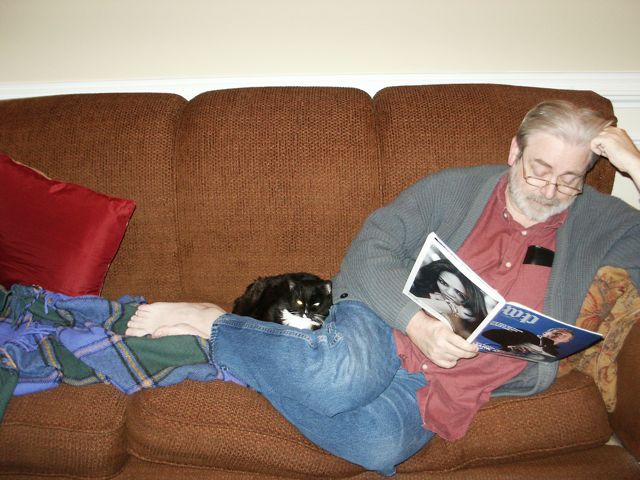 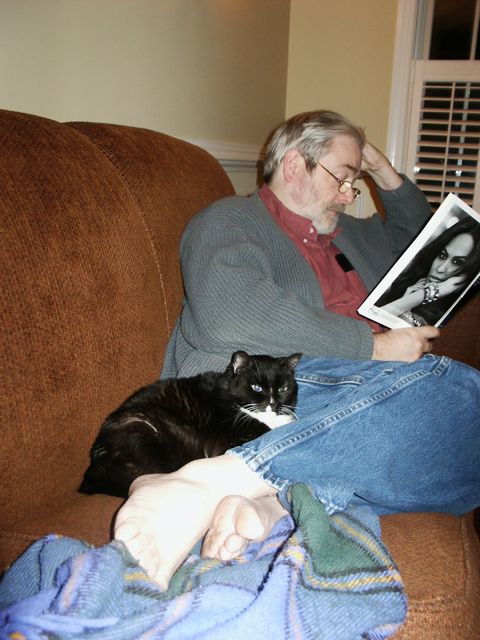 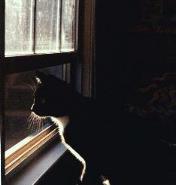 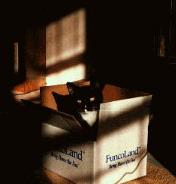