Some years back we were overrun with pets -- at the time we had two cats, a parakeet, and an aquarium that belonged to the entire family, while Kiri had a couple of Siberian hamsters all her own.

Julian felt a bit left out -- none of the pets were his. We offered to get him a hamster for his birthday, but he wanted something different. He considered an iguana or a tarantula or a hermit crab. He eventually decided he wanted something reptilian -- Kiri was very much into "cute and furry" at the time, so Julian wanted something that wasn't -- but probably not an iguana, since they can grow to be large and troublesome and take a fair bit of care.

So we went to a local exotic-pet shop, Reptiles Unlimited (which was closed down by the authorities not long afterward), where he was immediately taken with the tokay geckoes. We bought him one.

This was Spot. He -- or more likely she, actually, but we couldn't tell -- lived in a ten-gallon tank in Julian's room for two and a half years.

Tokay geckos grow to about ten inches in length ordinarily; by the time we got her Spot had achieved that size or a little more despite having lost the tip of her tail. (This happened either before we got her or when we were first settling her in, we aren't sure. Lizard's tails mostly grow back, but she never had a proper point to hers again.) She changed color, depending on light levels in her environment -- in bright light she was greyish-blue with orange spots, but in the shade she changed to charcoal-gray (almost black) with reddish spots. She lived on a diet of live crickets -- we tried mealworms once or twice, but they burrowed into the wood chips lining the cage bottom where Spot couldn't catch them. The pet shop folks suggested baby mice, but I had an irrational prejudice against feeding mammals to a reptile. (I overcame that when Julian got Billy-Bob.) And she seemed quite happy with crickets. Preferably the smaller ones; if they were too big they were more trouble than she liked.

When we acquired Spot the shopkeeper told us she was six weeks old; this is obvious nonsense, as she was much too big for that. We suspect, given that Reptiles Unlimited apparently wasn't much on laws, that she was caught in the wild and nobody knew how old she was.

She would go through semi-dormant periods every so often, especially in cold weather, but in the summer of '98 she went off her feed and seemed to be losing weight. By mid-autumn she was constantly shedding, in big sheets instead of the smaller flakes she dropped when she was healthy, and her appetite was never much. We were worried, but really didn't know what, if anything, we could do.

And finally, on December 11, I went to take a look at her and found her lying dead in the corner of her cage.

We hope it was just old age, that she was closer to eight years old than eight weeks when we got her, but we don't know for sure and never will.

Tokay geckos are from southeast Asia; they're tree-dwelling carnivores. The name comes from their mating cry, which sounds like "to-kay!" -- or so we're told; Spot never made a sound, which is why we thought she was a female, as the males reportedly get very loud indeed in the spring.

You can't really tame a tokay gecko in the sense of being able to pet it or carry it around with you, but Spot was relatively mellow (another reason to suspect she wasn't young) and wouldn't panic or bite if we put a hand into her cage. She spent most of her time stuck to the glass side, just hanging around -- as in these photos. Even when she was healthy there were times we weren't entirely sure she was still alive -- lizards do "waiting motionlessly" really, really well. And she slept with her eyes open, which further complicated any attempt to judge how alert she was at any given time. (When she actually did die, though, it was pretty unmistakable.)

You could tell when she was hungry, though, because then she hung head-down. That's pouncing position -- tokays use gravity assist in attacking their prey. And when they want to, they move fast. I mean really, really fast. As in, you wouldn't see anything but a blur, and then Spot would be on the other side of the cage. Or if she was grabbing a cricket, there would just be a blur, but then she'd be back where she was, but crunching on a cricket that a moment before had been four or five inches away, completely unaware that it was about to become a lizard's dinner.

Anyway, tokay geckos aren't exactly cuddly or affectionate, but they're interesting critters and relatively easy to care for. We liked Spot. And Julian liked showing her off to guests. We still miss her sometimes.

For more information about tokay geckos, check out a Tokay gecko page we found. 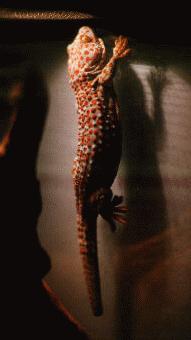 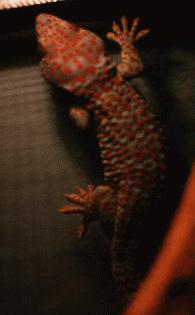