My son Julian is a graduate of Harvey Mudd College, and received a doctorate in physics from the University of Colorado at Boulder. At the time of this writing he's working as an assistant professor at the Center for Optical and Electromagnetic Research at Zhejiang University in Hangzhou, China.

Prior to turning eighteen he was active in Boy Scouts, where he attained the rank of Eagle Scout. Julian plays chess fairly seriously; he has an "expert" rating (just barely). He's also a high-level "Magic: The Gathering" player.

He has a Facebook page, but he doesn't use it much.

As a child, Julian collected toy crustaceans -- mostly stuffed plush ones. He had a wide variety of crabs and lobsters, ranging from one that appears to have been intended for a keychain up to a three-foot hand-made monster named Super Medic.

One of his favorites was Mr. Crabbie, maybe eight or ten inches across. When asked long, long ago what he'd like to see posted on the webpage about him, Julian decided to see if Mr. Crabbie could be scanned in. Not a mere photo of Mr. Crabbie, but Mr. Crabbie himself.

Rather to my surprise, it worked. So here, once again, is... 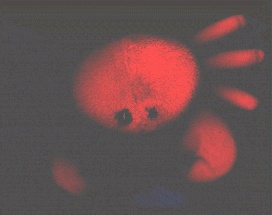 Another noteworthy crustacean in the collection, as mentioned above, was Super Medic, who has her own page. You can also find some brief mention of the adventures of Mr. Crabbie, Super Medic, and of course Julian in the trip report of our 1997 vacation.