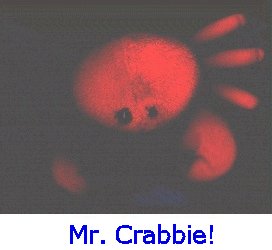 As mentioned elsewhere, when he was a kid my son Julian collected plush animals in certain categories: polar bears and crustaceans. Actually, they didn't have to be plush if they were crustaceans. (He also collected beanbag dragons and pieces of real animals, but that's irrelevant.)

He accumulated scads of stuffed crabs and stuffed lobsters -- most of them bright red, which of course means they've been cooked, but we ignore that. Any time we took a long trip, he was on the lookout for additions to his collection, as souvenirs. We got a canned lobster from Niagara Falls, Ontario, for example.

Mr. Crabbie, pictured here, was one of his favorites. He came with us on our 1997 trip to Mammoth Cave, and was fairly active in the car along the way. In Horse Cave, Kentucky, at the outlet mall there, we stopped into a toy store, and Julian bought a new crab and a new lobster -- kind of small ones, red plush again.

I've explained elsewhere how to play "I Have A Question." Well, Julian was trying to decide on names for the new guys, and came up with the clever idea of making his question in one round of "I Have A Question" be, "What should I name these?"

My answer didn't work, and Kiri's didn't work, but Julie's was "Hamburger, fries, and a Coke." So he named the new crab Hamburger, and the new lobster Fries, and that left "a Coke" unclaimed.

That wouldn't do. We don't allow loose ends like that. So we decided that that was Mr. Crabbie's first name(s) -- A. Coke Crabbie.

When Julie realized why it was "Alistair Coke" she groaned loudly, which meant there was no going back. That's his name now, permanently.

A Note of Possible Interest: