Nightside City (Del Rey, 1989) was long my favorite of my science fiction novels, and when it was first published I had high hopes for it. I thought it was pretty darn good. It got good reviews. So I started writing a sequel, called Realms of Light. When the early sales figures came in, though, I stopped. I'd written a little over 10,000 words, along with an outline and notes.

Then in 2005 I began writing online serials of works that readers wanted and publishers didn't. The first two were Ethshar novels, but I decided to see if I could do Realms of Light the same way. The project lasted from November 2008 to November 2010 and was only partially successful, but the novel got written and was published by FoxAcre Press (ISBN 978-0-9818487-7-8) -- it's available here.

Below I'll tell you about it. Over there to the right you'll find a list of links that can take you to the various parts of this page. 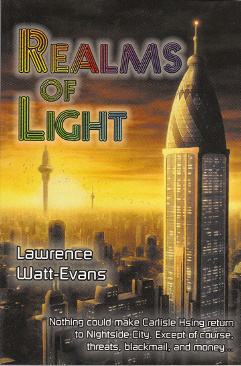 Carlisle Hsing had escaped from Nightside City to the safety of Prometheus, and had no intention of going back -- until a billionaire made her an offer she couldn't refuse...

In the mid-1980s the big thing in science fiction was cyberpunk, as exemplified by William Gibson's Neuromancer, and I took a shot at writing something vaguely cyberpunkish with Nightside City, a story about a 24th-century hardboiled detective named Carlisle Hsing on the not-quite-tidelocked planet Epimetheus.

When Nightside City was first published, I had high hopes for it. It got good reviews. I liked my protagonist a lot, and I liked the world that Sheridan Simon and I had created; I didn't want to abandon Hsing and Nightside City. It took me a little while to come up with a plot for a sequel, but then Ed Bryant made a casual remark about the movie "Chinatown" at a convention, and my mental gears began turning, and it all fell into place. I started writing Realms of Light.

Then the early sales figures for Nightside City came in, the publisher expressed no interest in a sequel, and I stopped. I'd written a little over 10,000 words, along with an outline and notes.

That was how matters stayed for fifteen years. I would occasionally look at the opening chapters I'd written, maybe add a paragraph or two, just for my own amusement, but I had no way of getting it into print, and it made more sense to spend my time and creative energy on writing things I'd get paid for.

But then in April of 2005 I had another novel that had been dropped by a publisher -- The Spriggan Mirror had been under contract to Tor, but they cancelled the contract, leaving me with four and a half chapters.

I had readers nagging me about it, and finally I said, "Okay, I'll put the first chapter on the web, and if you send me enough money I'll post the second, and so on, and we'll see if you'll pay me enough to make it worth writing the whole thing."

I didn't expect it to work; it was mostly intended to shut people up about it. I thought I'd take in maybe $400 before readers lost interest.

Wrong. Six months later I'd written and posted all twenty-eight chapters and been paid for them.

I tried it again with The Vondish Ambassador, and it worked again.

So I figured that here was a way to finally finish Realms of Light, and I launched it as an online serial in November 2008.

Alas, a sequel to a single twenty-year-old SF novel didn't go over as well as new volumes in a fantasy series, but I did write the entire novel, and here we are.

Back in 1989 I had thought about a third Carlisle Hsing story, The End of the Night. It had only gotten as far as a single page of notes.

That's probably as far as it will ever get, but the publisher at FoxAcre Press would very much like to see a third volume, so maybe someday...

About Realms of Light:

You can buy Realms of Light from the usual suspects: