Carlisle Hsing is a private detective in the 24th century, based in the Eta Cassiopeia star system. The first two novels about her (all that exist so far) are mostly set on Epimetheus, an almost-tidelocked planet where the day side is virtually uninhabitable, while the night side is somewhat more hospitable. Hsing is a small woman with a big gun, trying to do the right thing while living in the wrong place, telling her story in her own distinctive voice.

Most of the background for my creation of Carlisle Hsing can be found on the page for Nightside City, so I won't repeat it here -- you're encouraged to go check it out, though.

For a long time Nightside City was all there was about Hsing, but it's traditional for detective stories to turn into series, and eventually this one did, too, when I wrote a sequel, Realms of Light.

So far there are just the two, but my publisher at FoxAcre Press, Roger MacBride Allen, has been nagging me for a third one, and I did plot a third one way back when. The working title is End of the Night, and it involves Carlisle Hsing going to Mars in search of her sister Alison. No idea if or when I'll ever write it.

And that's all. The images below can take you to the individual pages for the two novels. 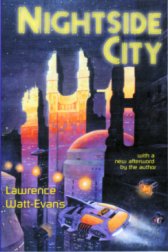 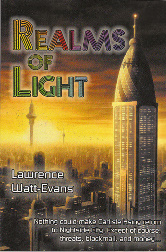