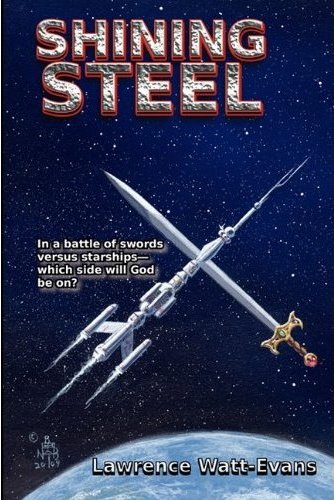 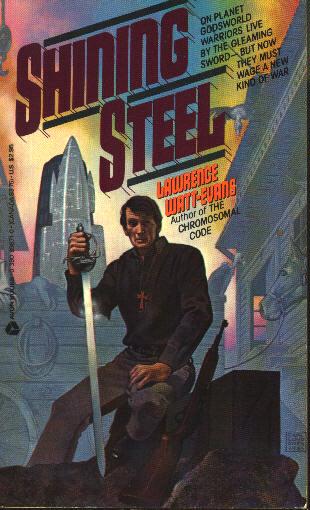 "...if it's a question of your buying this book or buying groceries, well, a few beans never hurt anybody..."

Shining Steel is the story of John Mercy-of-Christ, a man born and raised on Godsworld - a planet settled by Christian Fundamentalists who then lost all contact with the rest of humanity.

With no external enemies to fight, the people of Godsworld fought among themselves, and John is a fighter, a war leader for one tribe. But then he encounters people he can't fight, people with technology far beyond anything Godsworld has seen in centuries.

He is not about to just give up, though...

Throughout the 1980s I wrote both fantasy and science fiction, roughly in alternation.

The fantasy tended to be series novels, while the science fiction novels were usually individual stories that shared certain background elements.

One of those elements was the notion that in the early stages of interstellar travel starships would be relatively slow but cheap, so that any group that wanted to could colonize, but the colony worlds would be isolated. Then, centuries later, the "Wheeler drive" (named for a physicist active at the time I was writing) made rapid communication possible, and these lost colonies were rediscovered. Lots of story possibilities in that. Besides

In 1984 I was living in Kentucky, and the Reagan years were in full swing; I was surrounded by devout Baptists and the news was full of TV evangelists.

Shining Steel was the result.


The brass casings gleamed golden in the firelight as he picked up the first bullet. He handed it to a waiting warrior and solemnly spoke the ancient and meaningless ritual phrase, "Mekkit kant!"
The warrior accepted it with equal solemnity, then stepped back to make room for the next.
The ten bullets were distributed to ten men, and each of the chosen carefully slid the precious cartridge into his rifle. When all had done so, they settled comfortably on the ground to await the order to attack. Some cast occasional glances at the eastern horizon.
Around them their less fortunate comrades, those who had not been chosen to carry firearms in the coming battle, covered the hillside. Many of them, as they polished swords and knives, also looked to the east.
"Won't do no darn good watching the sunrise," said the man who had passed out the ammunition, "We go on Captain John's word, not before."
"He told us we'd attack at dawn, same as always," one of the riflemen replied.
"We probably will, then," said the first, "But it's at his word."
The other shrugged and looked to the east. The sky was blue now, no longer black, and the first warm hints of pink were beginning to show. Whatever the signal, he told himself, it would not be long in coming. He cradled his rifle in his arms and looked down the slope at the waiting horses.
The tent-flaps behind him parted and the commander stepped out, already dressed in his riding leathers, his sword on his hip and his helmet on his head.
"All right, boys," he called, "Get your horses. We're riding out now. Got your bullets, riflemen? Habakkuk?"
"All set, John," answered the man who had distributed the cartridges. The ten chosen recipients all nodded confirmation.
"Good; don't waste them. We want this village as a base; this isn't just a raid for the fun of it. Shoot to kill, and use your swords, not your lungs. We mean business, we aren't just out to scare them."
There was a muttered chorus of assent.
"Well, don't just stand there, then; get the horses!" The commander waved, and the men hurried down to their waiting mounts.
The commander's own horse was led up the slope by a young aide; it was beneath the dignity of the captain's office to fetch the beast for himself. That, at any rate, was what the Elders insisted, and that was why John forced himself to wait while the boy cajoled the reluctant animal. He would have preferred fetching his own horse, as the other warriors did, but that went against custom--and custom was very important, as no one could say for sure, in these benighted latter days when so many had fallen away from the True Faith, what was mere habit and what was the One Way.
Hiding his impatience, John waited.
The instant the animal was within reach he snatched the reins from the boy and swung himself into the saddle. A glance around assured him that at least half his men were astride; that was enough for the next step. The others could mount during the invocation or catch up later. This hurry would keep them on their toes; he could not allow anyone to get soft.
"Douse the fire," he ordered the boy, "And break camp. After today we'll either be in the village or we'll be dead." That said, he turned toward his waiting men and shouted, "Hear us, O Lord!"
The warriors watched expectantly.
"O Lord, it's me, John Mercy-of-Christ, who You've made the Armed Guardian of the True Word and Flesh, and I'm speaking for all these men here. We're about to go into battle, Lord, to fight against people who have left the true path, the way of the True Word and Flesh. We're fighting for You, Lord, to bring Your truth to those who have spurned it, and we ask that You bless this task, and these men who attempt it. And if any of us fall today, Lord, we know that You've got a special warm welcome waiting and an honored place in Heaven for us, because we're doing Your work. Amen."
"Amen," his men replied.
Satisfied, John took a final look at his advance unit of cavalry, more than a hundred strong, then turned and spurred his mount up the slope. "To battle," he bellowed, "in the Name of the Lord!"

On this page:
Origins | Excerpt | Booksellers

The hardcopy edition is available from:

The e-book edition of Shining Steel is available:

The Cyborg & the Sorcerers

The Wizard & the War Machine

The Spartacus File (with Carl Parlagreco)

Tom Derringer and the Aluminum Airship

Tom Derringer in the Tunnels of Terror

Tom Derringer and the Steam-Powered Saurians

Tom Derringer and the Electrical Empire