Deathrealm, now defunct, was for several years one of the leading small-press horror magazines in the United States, containing fiction and articles by some of the best horror writers then working.

For the latter part of its existence Deathrealm was published quarterly by Malicious Press, a partnership consisting of Lawrence Watt Evans and Terry Rossio. Malicious Press no longer exists.

Subscriptions are no longer available, nor are any story submissions being considered. Which might seem obvious, but I occasionally received inquiries for several years after the magazine folded.

Deathrealm won the International Horror Critics Guild Award for best horror magazine of 1995. The award was voted on by members of the 1996 World Horror Convention and presented at the convention.

Deathrealm #27 was banned in Canada!

Honest, it was stopped by Customs on the grounds the cover art was too "disturbing." We don't understand. If you'd like to see the "disturbing" image for yourself, in the form of a JPEG of the cover, you can click here.

For two years near the end of its run, Deathrealm presented awards based on a poll of the readers. Here are the results:

The First Annual Deathrealm Awards, presented in 1995 for works published in 1994.

The Second Annual Deathrealm Awards, presented in 1996 for works published in 1995.

A brief history of Deathrealm was written by Mark Rainey on the occasion of the first Malicious Press issue. 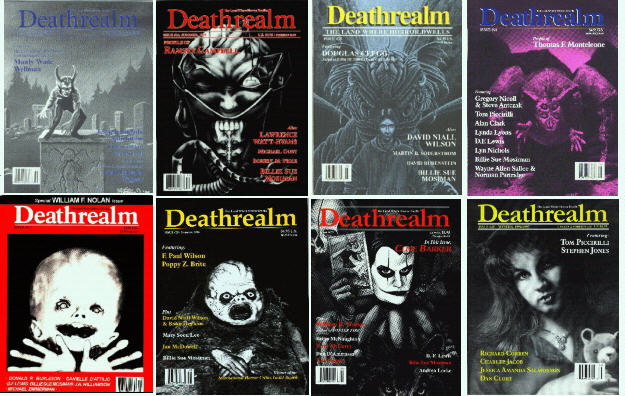