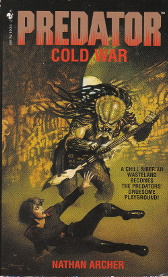 The alien predators like heat -- so why is one prowling Siberia, and killing people at a remote pumping station?

A secret American military group sends Lt. Schaefer of the NYPD to find out, and he joins forces with a Russian officer -- but that doesn't mean they trust each other.

This novel is an adaptation of Mark Verheiden's second four-issue Predator mini-series from Dark Horse Comics, based on the 20th Century Fox movies.

I really enjoyed writing Predator: Concrete Jungle, and Dark Horse was pretty happy with the results, so they asked if I'd like to do another Predator novelization. I turned down Predator: Big Game on the grounds that I wasn't familiar enough with the setting (but actually because I didn't much like it), but I was happy to tackle Predator: Cold War, which was a direct sequel to Concrete Jungle, bringing back much of the cast, and scripted by Mark Verheiden, whose plotting and characters suited me.

You might wonder why I was willing to write about Siberia but not the American Southwest; well, at the time I hadn't been to either of them, but I figured readers were more likely to spot errors in a New Mexico setting. I'd studied Russian a little as a teenager, so I felt more comfortable with Russians than with Indians.

So I wrote it, and had fun, and made some money, but after that I felt I'd had enough of the Predators, and was happy to see Steve Perry take over the series. 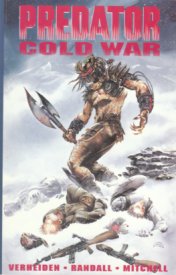 I didn't need to change much with this one; there weren't any issues regarding conflicts with movies. There were a few small things that were altered, though:

I didn't need to mess with the plot, though; that was fine just as it was.

The main thing I remember researching for this one was Russian weaponry. Since I was working in text and couldn't rely on images, I needed to know what a Russian soldier would be carrying, so I read up on the AK-74 (not the familiar AK-47), and the newly-developed-at-the-time AK-100, and various other firearms. That was mildly interesting.

I also brushed up on Siberian geography, the Russian language, and a few other such details, but not very extensively. And of course, I watched both Predator movies again, and re-read my own previous novel. I wanted to make sure everything was as accurate and consistent as possible.

But that was about it -- there was nothing remotely like my long conversation with Lt. Kasanoff for Predator: Concrete Jungle, or the trip to New York to check out locations for Spider-Man: Goblin Moon. There was no series bible, the way there was with Star Trek. All I had to do was follow the original.