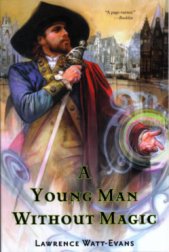 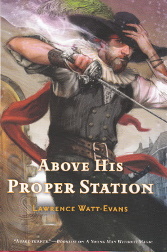 At some point early in the 21st century I was trying to decide what to work on next. I'd finished the Obsidian Chronicles, Tor had told me they didn't want any more Ethshar stories, and I was wrapping up the Annals of the Chosen. I had also made the surprising (to me, anyway) discovery that writing the Annals had not been fun.

So I asked myself what had been fun to write, and the answer was Dragon Weather, and (to a lesser extent, partly because I was sick when I wrote The Dragon Society) its sequels. (Ethshar, too, but Tor didn't want any more of those.) Dragon Weather had been consciously inspired by classic swashbucklers, (especially and obviously The Count of Monte Cristo), so could I maybe do something else along those lines? I had no interest in returning to the Lands of Man -- been there, done that, and that world was created specifically to tell the story I had told -- but maybe I could come up with something new that would serve as a setting for lots more stories, based on old favorites like Scaramouche and The Scarlet Pimpernel.

So I started working out a background that would let me write old-fashioned swashbuckling adventure. I looked at some of my planned-but-not-written stories (such as Assassin in Waiting) and incorporated those, as well.

The result was the Bound Lands. Well, the result was what became the Bound Lands -- that name only came along much later. The Walasian Empire and Ermetia were there from the start, though, and I knew I'd need something like Quand, though that wasn't its original name. The Cousins, Noroda, the Quandish Archipelago, and the Mystery Lands were added later.

This was supposed to be my new open-ended series that would run as long as I kept writing; I was enthusiastic about it, and my editor, Brian Thomsen, was enthusiastic, as well. We spent an afternoon at an Irish bar in Manhattan working out some of the stories I'd tell, starting with Sorcerer's Bane -- which came out so long when I wrote it that it got split into two novels, A Young Man Without Magic and Above His Proper Station. The series got off to a pretty decent start with a two-book contract from Tor -- but then Brian died suddenly, and my new editor wasn't interested; Tor didn't buy the third book, On A Field Sable, even though it had originally been the second book in the contract, before I split the first one into two volumes.

So for now the series is on hold, and there are just those two novels -- but I have several more planned, some of which are described on my "Future Projects" page:

Besides those, there's The Prince's Return (the title will probably change if I ever write it), Spellfront, A Hero of the People, Stormchildren, and several that are still pretty vague.

And then there are short stories. "Sorcery of the Heart" is set in the Walasian Empire, and "An Interrupted Betrothal" is set in the Cousins. I like this setting, and want to work in it some more!