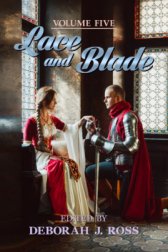 Years ago, I received an invitation to submit a story to the second "Lace and Blade" anthology. I wanted to, but the story I wanted to send didn't work out -- it insisted on being too long, and I never finished it.

When the third volume came around I was too busy and didn't try.

For the fourth, though, I was determined to send something, and after much effort I managed to write "Sorcery of the Heart," which they bought.

That was suffiently enjoyable for all concerned that they invited me back for Volume 5, and I eventually came up with "An Interrupted Betrothal," and they bought it. I had originally planned a rather different story, "The Whispering Bandit," but it kept running too long, so finally I stripped the plot down to its most basic elements, which meant cutting out the whispering bandit entirely, so it needed a different title. Some day I may actually write "The Whispering Bandit," as well -- it's different enough from what I wound up with here.

I'm fairly sure the story is set in the southern part of the region known as the Cousins, in the world of the Bound Lands. "The Whispering Bandit" definitely was, but it's not as clear with "An Interrupted Betrothal."

Alas, as of this writing no sixth volume of Lace and Blade is planned.