Years ago, I received an invitation to submit a story to the second "Lace and Blade" anthology. I wanted to, but the story I wanted to send (the working title is "Fearless") didn't cooperate -- the plot went sideways and I wasn't able to finish it.

When the third volume came around I was too busy and didn't even try. 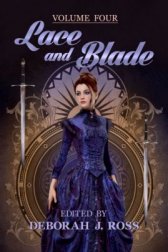 For the fourth, though, I was determined to send something. I spent months working on a story called "The Dancing Teacher," but could never get it finished in a way I thought would fit the anthology.

Eventually, I gave up, and sat down to address the roots of the problem. Basically, I decided that I was trying to make a pre-existing story idea fit the anthology, and should instead write one from scratch. It needed to have romance, and manners, and I decided it should include music, and of course swordplay wouldn't be amiss.

And that resulted in "Sorcery of the Heart." Which is (like the two failed attempts) set in the Bound Lands.

This time it worked, I submitted the story, and it was accepted.