These weren't necessarily new when I posted about them -- just something I read recently and liked a lot. And for whatever it's worth, here they are: 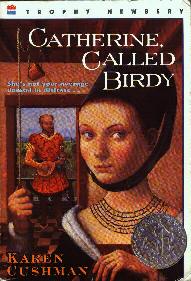 I thought my next entry was going to be Terry Pratchett's The Last Continent, but while that was fun, it was slightly below average for a Discworld novel, and instead I find myself recommending a book my son Julian brought home from his seventh-grade English class.

I don't usually read Julian's books, but this one caught my eye -- and held it, once I started reading. It purports to be a diary covering just over a year in the life of Catherine of Stonebridge, a minor English noblewoman, thirteen years old and the target of her father's determination to marry her off profitably. The year in question runs from September 1290 through September 1291.

It's wonderful. The presentation of medieval life is amazingly well-done, showing the reader things that most people never think about -- crowded beds, folk medicine done by guesswork, hanged children, constant pregnancy, etc. And this is all done through Birdy's eyes, so it's all just everyday life.

Birdy herself is a delightful character -- a rebellious but well-meaning girl just coming of age, prone to wild fancies and pranks that get out of hand. I laughed as hard at her explanation of how she burned down the manor privy with one of her unwanted suitors inside as at anything in The Last Continent.

I'm a little surprised I haven't heard of this book being banned from school libraries, actually -- it's got plenty of realistic period detail about farting and marriage customs to offend the bluenoses, an incident involving the expulsion of the Jews from England to offend the politically paranoid, etc.

It's not perfect -- for one thing, as is to be expected from the diary form, it's short on plot, and what plot there is gets a bit rushed toward the end, with a few too many convenient deaths. The frequent deaths are, of course, a part of medieval life, and generally well-handled, but in the latter chapters the who and when of the various deaths is a little too obviously chosen to suit the plot.

Still, it's a really enjoyable book, beginning to end, for readers of any age. Highly recommended.

It's available from Amazon

, and Barnes & Noble, and the Book Depository

I didn't have a book-recommendations page when I read this, but it came up in conversation and I was reminded of how impressed I was with it...

The Throne of Bones, by Brian McNaughton 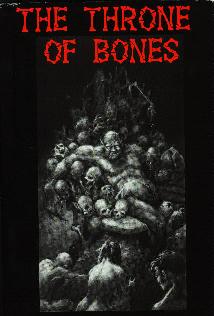 Catherine, Called Birdy is a YA novel. The Throne of Bones is about as far from a YA novel as it's possible to get. It's nominally a collection of short stories, but they all interrelate in varying degrees, and the work as a whole is complex, sophisticated, cynical, morbid, and overpowering.

The obvious influences here are the "big three" Weird Tales authors of the 1920s and '30s -- H.P. Lovecraft, Clark Ashton Smith, and Robert E. Howard. McNaughton, however, is a far better writer at a technical level than Lovecraft or Howard, arguably better than Smith, and has the advantage of working in a time and medium without the restrictions imposed on the pulps; his stories need not merely hint at their decadent concerns. These stories are awash in sex, gore, and degradation -- but that's never, ever, gratuitous, or included for shock value. If you're repulsed by incest, cannibalism, murder, or other atrocities, you don't want to read this book. If you want to read about incest, cannibalism, murder, or other atrocities for titillation, again, you don't want to read this book. But if you're interested in the human condition and accept incest, cannibalism, murder, and other atrocities as part of that condition, albeit a small and deviant part, then you do want to read this. In fact, you owe it to yourself.

The stories in The Throne of Bones are set in an invented world that appears as complex as our own, with its own wars, religions, and empires. Most of the stories, though not all, revolve around the ghouls that inhabit the vast cemetery called Dreamers' Hill in the city of Crotalorn. McNaughton presents us with a fully-thought-out physiology, culture, and history for these ghouls, shows us the lives of assorted ghouls and humans over a span of centuries, and makes us care about them. These stories are rich in pathos and irony, awash in atmosphere... and appalling in their events. This is dark, twisted stuff. It deserved the World Fantasy Award. Hell, it deserved the Stoker, and probably would have won it if one of the other finalists in the "Collection" category hadn't been by a popular and recently-dead author -- dead guys always get the sympathy vote.

McNaughton makes no concessions to anyone here. If you find some stories too disturbing, these probably qualify. If you want things spelled out for you, you'll be lost and confused. But if you're intelligent and well-read and not squeamish, if you appreciate sophisticated horror, check it out.

It's available from Amazon

, and Barnes & Noble, and the Book Depository. 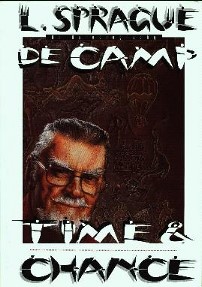 This big thick book is L. Sprague de Camp's autobiography. De Camp was in his nineties and still writing after about sixty years in the field when this was published (he died in 2000), and was one of my personal favorite fantasy writers -- I modeled my own Ethshar novels on his works, on novels like The Fallible Fiend and The Unbeheaded King, because de Camp wasn't writing enough of them to satisfy me. (The Harold Shea stories, written in collaboration with Fletcher Pratt, are much better known but were nowhere near as strong an influence on me.)

According to the text, de Camp's wife talked him into writing his autobiography while he still could.

The result kept me reading avidly for hours at a stretch. It starts a little slowly with an extended discussion of his American ancestors -- some of which is important information, some of which seems pointless -- but then picks up speed.

It's fascinating partly just as a glimpse into a vanished world. De Camp was born in 1907, and his boyhood seems very alien now in many ways -- but very familiar in others. He takes for granted things that seem utterly weird to me amid the usual elements of growing up and attending school as a nerd.

And in adulthood, we get accounts of his career, his travels, his interactions with fandom and the publishing world. Travel seems to get the most attention, and in fact de Camp's been to a lot of interesting places, but you know, I think I'd have preferred more about his children, his neighbors, and other mundane details. Still, it's an entertaining read.

We also get to see far more of his personality and beliefs than I'd ever glimpsed the two or three times I've met and spoken with him. He comes across less stiff and formal here than anywhere else I've encountered him.

Not that he's the most flexible man in the world -- I sometimes found myself getting annoyed by signs of old-fogeyism, especially in regard to "the youth rebellion of 1968-1974." While he's quite good at seeing what was wrong with my generation's actions in that period, he manages to completely miss the good parts. Ah, well.

And quite aside from de Camp's own words, let me mention that for a fancy hardcover from a small press, this book has amazingly bad copy-editing and proofreading. It's riddled with typos, misspellings (especially of names), and silly little errors. At one point an entire paragraph appears out of place, at the end of a chapter well past where it should have been. De Camp was not well-served by his editors in this regard.

But all the same, if you're interested in the history of fantasy, or travel writing, or life in early twentieth century America, this book's definitely worth reading. If you're a fan of Sprague de Camp, as I am, you really need to read this book.

It appears to still be available new from Amazon

, and used from Barnes & Noble.

The Price of the Stars, by Debra Doyle and James D. Macdonald 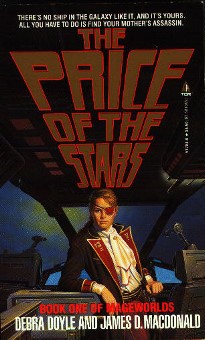 The authors have stuff about this book and the series on their own Website, but I'd still like to say a little:

, and for the Nook, and from Kobo