These weren't necessarily new when I posted about them -- just something I read recently and liked a lot. And for whatever it's worth, here's my only entry from the second half of 1999:

I've been a fan of Terry Pratchett's Discworld for years, and I've read and enjoyed all of them -- to the point I eventually wrote a book about the series -- but the last couple before Carpe Jugulum were slightly below average, so I didn't feel right recommending them here.

With Carpe Jugulum I don't have that problem. It's a good one.

For those of you not familiar with the Discworld, the series is humorous fantasy, set on a world where not only does magic work, but just about all the usual fantasy tropes are present, plentiful, and suitable for mockery. The Discworld is indeed a flat disc, supported on the backs of four gigantic elephants, who in turn stand atop a truly colossal turtle.

Other than that, though, it's a pretty normal sort of place, where most people prefer to go about their own business.

There are dozens of Discworld books, and they mostly fall into a few subseries. I'd rate the Rincewind the Wizzard stories as the weakest subset, and the tales of the Ankh-Morpork city guard the best on average, but the stories about Granny Weatherwax and the witches of Lancre rate a close second to the guards.

Carpe Jugulum is about Granny Weatherwax and the witches of Lancre, and how they handle an influx of vampires from the neighboring land of Uberwald. Pratchett, as usual, drags in every possible cliche about his topic, then twists them around, rams them together in odd combinations, and generally wreaks havoc upon them, to great humorous effect and in the service of a satisfying plot. (It's that last bit, the satisfying plot, that was missing in The Last Continent, by the way.)

So this time out we get to meet Igor, the traditionalist servant of non-traditional vampires. We find out how many angels Granny Weatherwax thinks can dance on the head of a pin. We get an explanation of the evolutionary advantages conveyed by vampiric tradition. We find out that Agnes Nitt is in two minds about just about everything.

If you're a Discworld fan, you probably already read this one -- but if you haven't, if you thought the series had gone stale, you should definitely check it out. The slump, like previous slumps, was temporary.

And if you're not a Discworld fan... well, you should be.

This isn't the ideal book to start with, though. Oh, I think it would work, it would be comprehensible and funny, but you'd be missing a lot of backstory and a lot of running gags. There are references here to several of the previous witches books, and also to Small Gods (one of the not-really-part-of-any-subseries books).

I'd recommend starting much earlier in the series. If you're sure you'll continue, go ahead and start at the beginning, with The Colour of Magic. If you're not sure, though, start with Equal Rites, because frankly, The Colour of Magic is not up to the standards of the later books, and it's Equal Rites that first introduced Granny Weatherwax (though not quite in her present form -- consistency is not Pratchett's strong point) and broke away from Rincewind.

If you have doubts about reading anything so silly, rest assured, the Discworld novels are far more than silly. There's a solid core of humanity and insight beneath the absurd situations.

If you have doubts about reading anything so British, well... yeah, they're definitely British. You hardly need to be British to appreciate them, though, or I (born and raised in America) wouldn't be plugging them so hard, would I?

Give 'em a try. I think they're probably the best fantasy series being written today -- and no, I don't just mean humorous fantasy, I mean all fantasy!

The whole series (I think; most of it, certainly) is available from Amazon

and Barnes & Noble and the Book Depository. 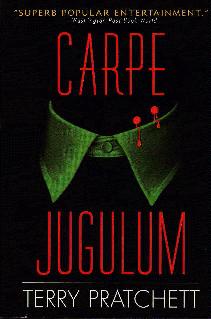