...about my connections with the world of comics.

Do you write comic books?
Not at the moment. I've scripted a few in the past. I may do more in the future. I'd like to.
Did you ever draw comic books?
No. I can't draw at all. All the artistic talent in my family is in the female side -- my daughter's an artist, my wife can draw, my mother was pretty good with a pencil, but I'm completely hopeless.
Aren't you supposed to be an expert on pre-Comics Code horror comics?
I used to be. I wrote dozens of articles about them, read everything I could find on the subject, and had one of the most complete collections in the world.

But then I got tired of the whole thing, and in 1994 I sold off my collection, and now I've forgotten most of what I knew.

Weren't you writing a book about horror comics?
I started on one in the late 1980s, but abandoned the project years ago because Steve Bissette was working on a similar book, and Mike Benton's Illustrated History of Horror Comics appeared, and I decided the world didn't need another one.

Bissette never finished his, either.

But I did write this article, which has been reprinted a few times.

So what do you do in comics?
I own half of Beyond Comics, Inc., a small chain (two stores at present, though it's been three a couple of times, and we sometimes sell on eBay under the name "GaithersburgComics") of comics shops -- I don't work there, I just own a piece. I've read and collected comic books since 1959, I've written articles about comics since 1983, and I did script a few.
Didn't you write for Comics Buyer's Guide for awhile?
Yes. I wrote a column entitled "Rayguns, Elves, & Skin-Tight Suits" for CBG from 1983 to 1986, with a very brief revival a few years later. (The columns I wrote in 1986 appeared well into 1987; the backlog was one reason I quit.) All in all there were 112 installments, and a few other articles of various sorts.

I've written articles for several comics-related mags over the years, but that was the only long-running series.

Why'd you quit?
I got busy with other projects (such as parenthood -- my second child was born in 1986) and was dissatisfied with both reader response and CBG's editorial attitude. No, they didn't interfere too much; they didn't interfere enough, and I got frustrated by the lack of feedback on what they expected from me.
How come I keep seeing your name in comics Kurt Busiek wrote?
In 1989 Kurt hired me to script a couple of stories for Open Space, a series he was editing for Marvel that was written by prose science fiction writers. We discovered we had a lot in common, and have been friends ever since, despite sometimes living at opposite ends of the country. We've spent a fair bit of time on the phone with each other, bouncing ideas off each other, helping each other work out plot problems, and using each other for research. (I know more history and science than he does, for example, and he knows far more about comics and movies than I do.)

He's been kind enough to credit me for my help, and it's been a kick to see my name, or tidbits of information I've provided, in his comics.

He's also sometimes hired me to help out more extensively, when he wants more than can be fit into a single phone call, which is why I'm credited as an "Alternity Consultant" in Arrowsmith, for example.

What the heck is an Alternity Consultant?
It means I worked out the alternate history that serves as the background for the series.
Who's Marcia?
Damned if I know. That was Kurt's idea.
Who have you scripted comics for?
Marvel, Dark Horse, Tekno*Comix, and Wildstorm. The Wildstorm job was a one-shot under another name.
I've heard working for Tekno*Comix was really strange -- what's the story there?
Long.

No, seriously, it's a long and complicated story, one that deserves a whole page of its own and may eventually get one. The short version is that Tekno*Comix was a company founded and run by Hollywood lawyers who didn't know anything about comics publishing, they hired me because they didn't know what they were doing, and the whole thing was a disaster from start to finish. I made a bunch of money very quickly working for them, but was so badly burned that I wanted nothing to do with writing comics for several years after that.

By the way, the credits on Tekno*Comix are often unreliable; they credited me with at least one issue I didn't write, and one I

did write merely credits me with ''additional story concepts.''
How'd Open Space #0 happen? Why was it published years after the series was canceled?
I wrote that story, and Alex Ross painted it, for Open Space #5, but the series was canceled after #4. Then when Alex Ross got really hot after he did Marvels, Kurt Busiek mentioned to Marvel that they had an unpublished complete Alex Ross story sitting in a drawer...
How can I get into scripting comics?
I have no idea. Basically, every comics job I ever got was a fluke of one sort or another, and came about because someone already knew my name from non-comics writing. When I tried to get comics work through the official channels back in the '80s, sending in proposals and the like, it never worked.

If I knew how to get regular comics work, I'd have done it myself. 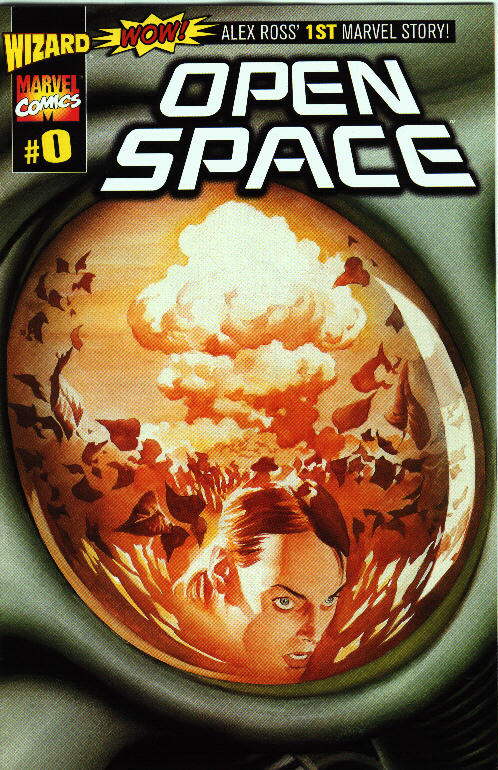