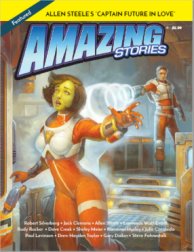 Back in 1987 I made my first sale to a major science fiction magazine, when Asimov's bought "Why I Left Harry's All-Night Hamburgers." I was thrilled. It went on to become my most successful story ever, by far. It won the Hugo for short story in 1988, as well as the Asimov's Readers' Award. It was nominated for the Nebula, but lost to Kate Wilhelm's "Forever Yours, Anna." It's been reprinted and translated so many times I've lost count.

All this fuss caught me by surprise, to be honest, but I enjoyed it. I'm still enjoying it, because it's still going on -- it's still getting reprinted and translated, and the mini-e-book

is still selling. In 2017 I got speaking engagements in Hanoi and Athens because I wrote it. And in 2018, Warner Brothers optioned the movie rights.

Naturally, when it first started to get attention, I wanted to find a way to exploit this opening. Back in 1988 I started writing spin-offs -- not sequels exactly, because I didn't want to say anthing more about the narrator, but other stories built around Harry's All-Night Hamburgers, the West Virginia diner that gets its late-night business from interdimensional travelers. I came up with several premises, and started writing five of them.

Over the next couple of years I finished just one, "A Flying Saucer with Minnesota Plates," which I sold to Asimov's. The other four didn't jell properly; they sat on my hard drive gathering virtual dust.

"Harry's Toaster" was really just a gag, one that owed a great deal to Henry Kuttner's story "The Proud Robot," and finishing it didn't seem worth the trouble at the time -- I had plenty of other stuff to work on.

I didn't have endings for "Tales from the Crypt" or "Harry the Huckster," and didn't feel ready to write "How I Found Harry's All-Night Hamburgers." So they just sat, for decades.

But then, early in 2018, Warner Brothers optioned a script based on "Why I Left Harry's All-Night Hamburgers," and my interest was suddenly renewed. That was the nudge I needed to pull them back out and look at the remaining four. This time I did complete the oldest of them, "How I Found Harry's All-Night Hamburgers" -- it turned into a novelet -- and "Harry's Toaster," almost thirty years after I started them. I sold "Harry's Toaster" to the newly-revived-via-Kickstarter Amazing Stores magazine, which had asked me if I had a story for their first issue.

So that was where it appeared, in the Fall 2018 issue.

(Later I finished a rough draft of another, "Tales from the Crypt," but I didn't like how it came out so I've never submitted it anywhere. I also came up with an all-new one, "One-Hit Wonder," that I haven't sold yet. "Harry the Huckster" still isn't finished.)

And that's it. "Harry's Toaster" has not appeared, as yet, in any other magazines, collections, or anthologies.