Back in 1987 I made my first sale to a major science fiction magazine when Asimov's bought "Why I Left Harry's All-Night Hamburgers." I was thrilled, and wanted to find a way to exploit this opening.

It immediately occurred to me that I could use Harry's as the setting for other stories. I came up with several premises, and started writing five of them. The most ambitious was called "How I Found Harry's All-Night Hamburgers," and it was intended as a pretty direct follow-up; it involves a detective hired to track down the source of a mysterious device. 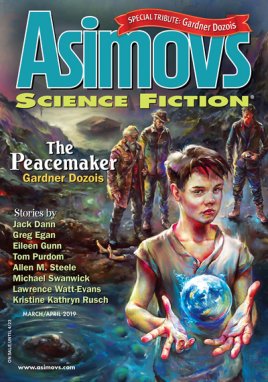 But the only one I finished in anything like a reasonable timeframe was "A Flying Saucer with Minnesota Plates." The others just didn't jell properly at the time.

"A Flying Saucer with Minnesota Plates" was really just a gag; same for Harry's Toaster" (which, I should mention, owes a great deal to Henry Kuttner's story "The Proud Robot"). I didn't have endings for "Tales from the Crypt" or "Harry the Huckster." (I still haven't figured out how to end "Harry the Huckster.")

But I don't really know why I didn't finish "How I Found Harry's All-Night Hamburgers." Maybe I was put off by the realization that it was going to be longer than the original story, and I wasn't entirely sure that was justified.

But then, early in 2018, Warner Brothers optioned a script based on "Why I Left Harry's All-Night Hamburgers," and my interest was suddenly renewed. This time I did complete "How I Found Harry's All-Night Hamburgers" and "Harry's Toaster." I sold the latter to Amazing (which had just been revived again) and the former to Asimov's -- my first sale there in over twenty years. Also my first submission there in over twenty years.

And it ran in the March/April 2019 issue, more than thirty years after the original appeared.