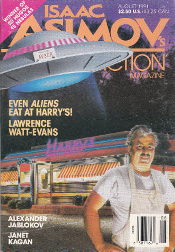 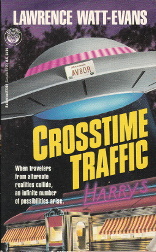 In 1987, after years of trying, I finally managed to break into the major short fiction markets with my story, "Why I Left Harry's All-Night Hamburgers." Not only did I sell it to Asimov's, but it went on to garner a Nebula nomination, and to win the 1988 short story Hugo.

I was, as I'm sure you could guess, thrilled. I wanted to follow up this success in any way I could. I proceeded to sell an assortment of stories to pretty much every major market in the SF field, to the point that around 1990 a short-fiction reviewer referred to me in Locus as "ubiquitous." Which was lovely.

Meanwhile, "Why I Left Harry's All-Night Hamburgers" proceeded to get reprinted all over the place; it's appeared in at least half a dozen languages, it's been included in textbooks, I sold radio and comic book rights, and eventually it was even optioned by Warner Brothers for a feature film. (Which does not mean any movie will ever be made.) The most obvious way to follow this up, and to cash in, was to write sequels.

So I started plotting sequels. Since the original story is completely self-contained and I didn't want to retroactively screw up the ending, none of the sequels involved bringing back the original narrator; instead they were all riffs on the idea that there's a diner in West Virginia that's regularly visited by travelers from alternate realities.

Most of them didn't get finished, let alone sold -- at least, not in a reasonable amount of time; after the Warner Brothers deal I pulled them back out and finished a couple, so thirty years later I finally sold "Harry's Toaster" and "How I Found Harry's All-Night Hamburgers."

(I also finished "Tales from the Crypt" but wasn't happy with it, so it's never been submitted anywhere, and I still haven't finished "Harry the Huckster." I did finish an all-new one, "One-Hit Wonder," but I haven't sold it.)

But one of them was short and simple enough that it did get written back in that first rush of enthusiasm, and it sold to Asimov's, where it even got the cover illustration.

That was "A Flying Saucer with Minnesota Plates."

And in case anyone ever wondered "why Minnesota?", I chose that state simply because its name had the right rhythm for the title, and Minnesota somehow seemed funnier to me than Massachusetts.

Above you can see the two covers it generated -- Crosstime Traffic used the same art, re-cropped, as the magazine because the new cover art Del Rey had commissioned for the book was... not very good. It also came in later than expected. The editor called me to ask if I had any suggestions as to how they could meet the production schedule without using crappy or irrelevant cover art, and I pointed out that "A Flying Saucer With Minnesota Plates" had been a cover story. So they contacted the artist, who was happy to get paid again.

Below is a list of the story's appearances to date.