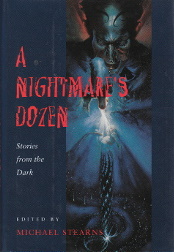 In the late 1980s and early 1990s, Dean Wesley Smith and Kristine Kathryn Rusch had their own little publishing empire called Pulphouse Publishing, putting out an assortment of books and magazines. At one point they announced they would be publishing an anthology called Splatterfairies, which was to combine traditional fairy stories with the feel of "splatterpunk" horror.

I thought that sounded pretty cool, so I wrote a story for them -- "What the Cat Dragged In," a tale about the fairies at the bottom of the garden that takes a nasty twist at the end.

But then Pulphouse went bust, and Splatterfairies was cancelled. (Rumor had it that Dean Smith had been severely disappointed in the quality of submissions for the anthology, in any case.)

So I had this story with no market -- but then Michael Stearns (the editor, not the musician) started a line of children's books at Harcourt Brace, aimed at the middle-school-to-young-adult market, and invited me to submit stories -- he knew me from working with Jane Yolen, who'd bought a story called "Richie" from me for her vampire anthology.

I sold him stories for two anthologies -- I wrote a new story, "Celestial Debris," for the SF anthology Starfarer's Dozen, and "What the Cat Dragged In" fit nicely in the horror volume, A Nightmare's Dozen: Stories from the Dark

. Perversely, I didn't get a story in the fantasy one, Wizard's Dozen.

Much later, I also included "What the Cat Dragged In" in my collection, Hazmat & Other Toxic Stories.