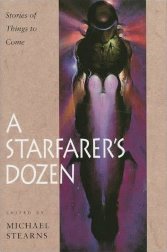 People have been telling me for decades that I should try writing "young adult" novels. I've always thought this sounded like a good idea; I just never got around to doing it. For awhile, though, I did write a bunch of short fiction for younger readers of various ages, starting when Jane Yolen issued an open invitation to all SFWA members (I was one at the time; I'm not now) for her anthology Vampires. I sold her a story for that, "Richie,", and then went on to write several stories for Bruce Coville.

And Jane's one-time assistant, Michael Stearns, invited me to submit stories to a series of anthologies he was editing, starting with A Starfarer's Dozen.

Years earlier -- many years earlier, as I was still living in Kentucky, which dates it to 1977-1986 -- I had plotted a short story called "Reaction" involving a stranded astronaut. I thought of it as fairly Heinleinesque. I never got around to writing it, despite doing a good bit of research on how NASA's spacesuits are constructed, but when Michael asked for a story, I remembered "Reaction," and that some of the Heinlein stories I'd wanted to emulate had orginally appeared in Boy's Life, and I decided that maybe I could do something with that. "Reaction," as originally plotted, didn't have a young protagonist, where that's pretty much de rigeur for YA, but I could add one... 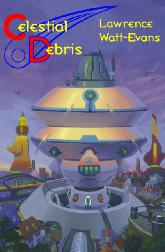 It took several drafts to get the story fit for publication, especially since it wanted to be longer than the maximum word-count in Michael's guidelines, but I eventually beat it into shape.

(Incidentally, if I were to finish "Reaction" now -- it's different enough that I could do that without feeling like a plagiarist -- I'd call it "Reaction Mass," instead.)

The market for collections being what it was, it wasn't until much later that I did finally put together Celestial Debris for FoxAcre Press, gathering together pretty much all my short fiction that could be considered "hard" science fiction. When I did, I was very pleased to have a suitable title story.

So far, those are the only two places the story has appeared.