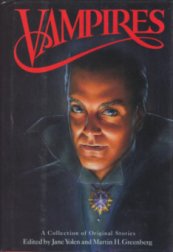 Back in the early days of the net, before the World Wide Web, there was a bulletin board service called "GEnie" -- General Electric Network for Information Exchange. It was created to use surplus computing power on GE's systems, and for awhile it was a major online hang-out for genre writers.

It wasn't unusual for editors to use GEnie to find writers. And one day Jane Yolen announced there that she was putting together a middle-grades vampire anthology, and was looking for submissions.

The guidelines were simple, but also challenging -- vampire stories with no sex or violence.

Since sex and violence are what vampires are all about... well, as I said, it was challenging. So I decided to give it a shot. I wrote a story called "It's My Body and I'll Die If I Want To," and sent it to Jane.

She responded saying that she would buy it if, and only if, I made two changes. One of them was small and easy and no big deal and I don't remember what it was. The other was that the title had to go; she thought it was disastrously wrong in pretty much every way possible. 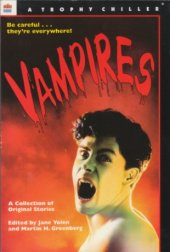 I'd thought it was clever, but what the heck, I had to admit it didn't fit the story's mood, and the book's intended readers probably never heard of "It's My Party and I'll Cry If I Want To." Thing is, I didn't have a back-up title ready, so I fell back on the utterly boring and used a character's name as the title.

Thus it became "Richie," and Jane bought it.

In these post-Twilight days it probably seems pretty quaint, but back then I was happy with it. Although it's out of print now, the anthology seems to have been well reviewed and has been reprinted a few times. (There's at least one edition, from 2002, where I've never actually seen a copy, so I don't have a picture of that one.)

And of course, since it's a vampire story, it's included in my collection In the Blood