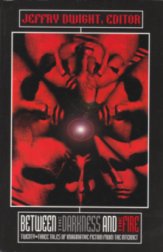 In the wake of the success of George R.R. Martin's "Wild Cards" series there was a sort of mini-boom of prose superhero stories, and I wanted to get in on it -- I've been reading comic books since 1959, writing about them since 1983, and I thought that if anyone was going to write superhero stories, I should.

The whole point of superhero prose, though, is to write stories that wouldn't work as well in comic books.

A superhero anthology came looking for a submission, and I had a couple of ideas. The one I most wanted to do was about an alien orphan who looked human, but unlike Superman had differences besides his super-powers, and that became "One of the Boys."

But then I got a second anthology invitation, and the editor I'd originally written it for didn't seem very enthusiastic, so I sent "One of the Boys" to the second anthology and wrote another story for the first, considering just why anyone would stay in the superhero business if he didn't have to. That's "The Sidekick." It's set in the same world as "One of the Boys," with references to characters who appeared in the earlier story, but is otherwise very different.

It was accepted -- but the anthology wasn't. There was a disagreement between the acquiring editor at the publisher, and the anthology's editors, and as a result the book never came out.

But I found a home for "The Sidekick" eventually, in Between the Darkness and the Fire

, edited by Jeffry Dwight. That was a benefit anthology for my favorite website, SFF-Net, in a 1,000-copy limited trade paperback edition.

I reprinted it in Celestial Debris

. So far those are the only places it's been published, but I keep thinking I should write more superhero stories and put together a collection of them.