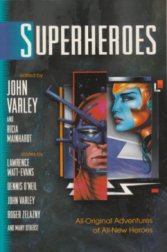 In 1986, DC Comics staged a big event called "Crisis on Infinite Earths" and used it to "reboot" their entire superhero universe. They wanted to clear away forty-five years of inconsistencies, stupid ideas, and general clutter that had accumulated in their stories, and start afresh.

This mostly worked, though inevitably there were things they missed or messed up -- there's no way to beta-test a comic-book universe -- and of course their writers promptly started adding new stupidities and inconsistencies, and now they had a model for rebooting, so they've done it several times since.

In 1986, though, it was a big deal, something that hadn't been done before, and they were aware that to some extent they were gambling their company on it, so they gave it plenty of build-up in the fan press, giving some hints about what they had planned.

At the time I was fairly active in comics fandom, and writing a regular column for The Comics Buyer's Guide, so I paid pretty close attention to the whole thing. A lot of the proposed changes sounded good; some I didn't see as making much difference one way or the other. The plans for Superman, though -- I didn't like those. DC had given John Byrne and Marv Wolfman the assignment of revamping the Man of Steel, and they had done a thorough and pretty well-thought-out job. Some of the changes are now so basic that readers don't remember there was ever another version -- Marv Wolfman's take on Lex Luthor, for example, turning him from a lone-wolf mad scientist to an obsessed corporate mogul.

In fact, I was generally happy with Wolfman's end of things, but John Byrne was young enough that he had formed his first impression of Superman not from the comics as much as from the Christopher Reeve movies, and he intended to bring that sensibility to the comic-book version. In particular, he wanted to emphasize Superman's Midestern farmboy background and his essential humanity.

Which was where I balked, because Superman isn't human. He's an alien. Yes, he came to Earth as a baby and grew up in Smallville, but he is not the same species we are. As I saw it at the time (and as some other writers have since), he ought to have constant problems trying to fit in, because despite his upbringing there are inevitably going to be real, significant differences in how he thinks and acts simply because he's not actually a human being.

"If I were writing it," I told myself, "I'd emphasize that. I'd play up his outsider status, and how there are things about human society that don't make sense to him on a basic, instinctive level."

I now recognize that for storytelling purposes of a superhero comic that's probably a bad idea, but at the time I was quite convinced of the superiority of my take, and eventually I wrote a story about it, which I called "One of the Boys," and which eventually saw print (it took awhile, as there weren't many markets for prose superhero stories) in an anthology called simply Superheroes

, edited by John Varley and Ricia Mainhardt, and published by Ace Books in January 1995.

And of course, I reprinted it in my collection, Celestial Debris.