The Seven Altars of Dusarra is the second volume in the four-part "The Lords of Dus" series. There are no spin-offs or related series outside the original four volumes, nor are any presently in the works, but the possibility of adding some eventually hasn't been ruled out. 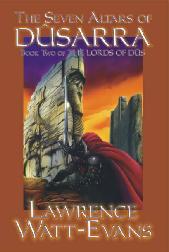 The Seven Altars of Dusarra

The rider paused at the top of the low ridge; the plain that lay just beyond was spread out before him under the pale stars of late summer. Directly before him there was an interruption of the flat earth; jagged silhouettes rose in black humps, huddled together within an uneven stone ring. The circle was broken at the point nearest him, and a single shattered wall rose to mark what had once been a substantial gatehouse; beside that wall flickered an orange flame, as warm as the stars were cold.

Although he was still too far away to discern any details, he knew that this was the town of Skelleth, and that the single light was the watch fire of the guardsman at the ruins of the North Gate. He had been here before, and knew that of the five gates in the crumbling city wall only this one was guarded. It was guarded against him and his kind.

There was no sign of life other than the lonely fire, and even had the man posted there been fully alert -- as he undoubtedly was not at this hour -- he could not have seen the rider or his party at such a distance in the dark. Their approach was undetected.

The mounted figure sat for a moment, his face invisible in the darkness and the shade of his trader's hat, studying the panorama; he glanced up as a nightbird flew overhead, and his eyes shone a baleful red with reflected starlight. His hollow-cheeked face had no nose, but only close-set slit nostrils; ragged black hair hung almost to his shoulders, but there was no trace of a beard on the leathery brown hide of his jaw. He was inhumanly tall and correspondingly broad. He was, in short, not human, but overman.

When I first wrote the novelet that became The Lure of the Basilisk, I intended it to be part of a series, and I didn't wait for it to sell before continuing. That first 10,000-word novelet was called "The Master of Mormoreth," and I followed it up with another novelet, 12,500 words, called "The City of Seven Temples." I wasn't being very sophisticated about this; I was setting Garth a bunch of tasks, that's all. The Forgotten King had him running errands. I knew what the Forgotten King wanted, and that made it fairly easy to figure out what sort of stuff he'd send Garth after. "The City of Seven Temples" was a pretty straightforward follow-up to the King's failure at the end of "Master of Mormoreth." When the basilisk didn't work out, he upped the stakes and went for the power of the dark gods themselves.

After that, I came up with the notion that there were certain things holding the universe together that the King had to remove, as well as things he needed to obtain.

Altogether, I completed four Garth stories before deciding to switch to novels -- the two novelets already mentioned, and two short stories, "The Eyes of Kewerro" and "The Dragon of Orgul." I also began several stories that I never completed -- The Lady in the Jewel was meant to be a novel, and "The Last Quest" (which kept changing titles) might have been a novel or might not, I wasn't sure, but would wrap up the series. There were others; I don't remember them all now, but one I think was called "The Jungle by Night" would've been pretty cool if I'd ever finished it.

Anyway, I did eventually put aside the idea of a series of shorts and turned "The Master of Mormoreth" into The Lure of the Basilisk as the first step in switching over to a series of novels.

When The Lure of the Basilisk sold, Lester del Rey, the editor who bought it, immediately asked for a sequel. It wasn't hard to figure out what to use; I hauled out "The City of Seven Temples" and expanded it to novel length.

Expanding 12,500 words to novel length was amazingly easy. The first three chapters had been one page in the novelet version. All I did was treat the novelet as an outline and flesh out all the incidents.

Except the result was still a bit short, and Lester had some major problems with the structure, so I wound up cannibalizing "The Eyes of Kewerro" and adding that material in as Chapters Four and Five. (It's about half the short story.)

That took care of it. Lester wanted a new title, on the grounds that the word "city" sounded too science-fictional, so The City of Seven Temples became The Seven Altars of Dûsarra, and here we are.

The Seven Altars of Dusarra was first published June 1981 by Del Rey Books, ISBN 0-345-29264-2. The original cover art is by Michael Herring. Two appendices, "Notes on Language and Pronunciation" and "Notes on Eramman Myth and Theology," are included.

The Del Rey edition went through at least six printings -- second printing was dated March 1984, third June 1984, sixth October 1986. All printings from the second on have cover art by Darrell K. Sweet.

The Wildside edition was first published in 2002, ISBN 1-58715-590-7, with cover art by Dalmazio Frau ; as a print-on-demand trade paperback, it should remain perpetually in print, with no distinction as to what printing a given copy is. This second edition includes both the original appendices and two additional new ones, "A History of This Novel" and "The Histories of Garth of Ordunin, Written and Unwritten," describing in detail how the story evolved.

The Seven Altars of Dusarra is also included in the four-novel Wildside Press hardcover omnibus, The Lords of Dus, ISBN 1-58715-665-2, which contains the complete series with updated and corrected appendices combined from all four volumes.

Note: If you have any information about the foreign editions I haven't seen, please e-mail me!

Frequently-Asked Questions about The Seven Altars of Dusarra

I don't actually have a FAQ specifically about this one volume in the series, so I'm providing...

1. The single most-often asked question: Will I ever write any more about Garth?
I honestly don't know. I did plot a fifth novel, back in 1983, but Del Rey never expressed any interest in it, so I never wrote it. I have no plans to do so. However, if Asimov could write more Foundation stories twenty or thirty years later, I'm not about to rule out writing more about Garth.

The remaining questions are all things that might be answered in that fifth volume if I ever wrote it; if you don't want to take even that one-in-a-million chance that I'll be giving away secrets you don't want to know, stop here.

2. Will Garth be accepted back into his homeland? He was an outcast at the end of the series.
Not easily, but eventually.
3. Were all the members of Aghad's following dead?
No. Dozens survived, scattered across the continent and disorganized by the loss of their central temple. They would make sporadic attempts to regroup and to avenge themselves on Garth.
4. What changes have occurred in Garth's world as a result of the destruction of the Fifteen Gods?
The lesser gods, the Arkhein, who survived, suddenly find themselves proportionately more powerful, and for a few years take the opportunity to interfere in human affairs more than before. Gradually, a new balance emerges and the gods become less whimsical once more.

Also, the laws of magic have changed. Much magic depended upon various gods, and therefore no longer works. Science, which really didn't work very well when the gods could change the rules at any time, does work--at least, when the Arkhein don't interfere.

Having the cycle of time broken, however, probably has the greatest effect on people. Under P'hul, everything anyone attempted was doomed to eventual slow failure. Under Bheleu, everything was destined to end in disaster. With the Dus gone and the Ages ended, this sort of predestination isn't there; plans can work or not work according to how well they were devised, or ordinary dumb luck. This means that the established order, which had decayed under P'hul and been largely destroyed by war under Bheleu, can finally be replaced by new organizations.

What those new organizations would be I can't really say; I hadn't worked out all the details yet. I suspect that the trading empire that Garth started at Skelleth would become a major power, that the Yprian invaders in Nekutta would become another, and that Eramma would fall apart into several small countries.

5. Will Frima be accepted as Baroness of Skelleth?
Yes, eventually, because she has Garth with her to enforce her claim, and is pregnant with an heir. It would take some fighting to establish her position, however.
6. Will Garth achieve the immortal fame he has been seeking?
No, not really, because nothing is truly immortal. He has, however, made changes enough in the world to content him, and will be remembered for a very long time indeed.
7. ??? Send me questions right here...
And maybe I'll answer them.

The e-book edition is available: 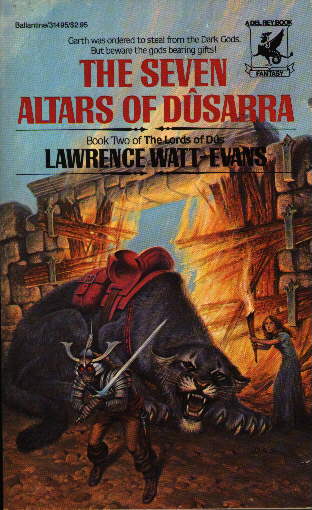 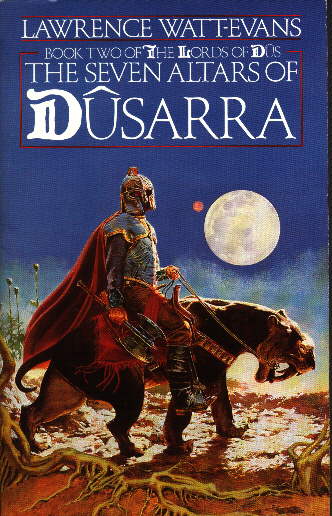 The British cover, by Kevin Tweddell 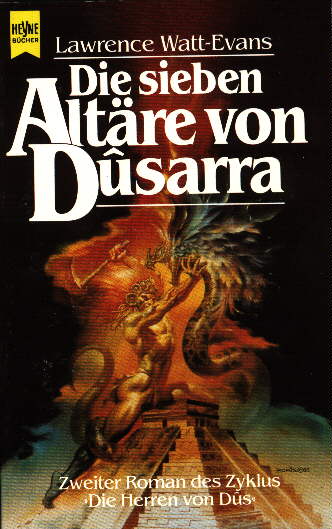 The German cover, by Boris Vallejo (this was stock art the publisher had on hand, not original for this book). 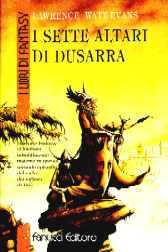