I've written several series, but my first published novels were the beginning of the four-part story of Garth of Ordunin. The four can be read independently, but are really parts of a single story and are best read straight through, in order.

That used to be somewhat inconvenient when the four novels were only available in separate volumes that might or might not all be in print at any given time. Now, though, thanks to Wildside Press, all four should be available indefinitely as individual trade paperbacks and e-books, and in a hardcover four-in-one omnibus, complete with extensive historical appendices.

There are no spin-offs, sequels, or related works beyond the four original novels and their appendices -- at least, not as yet. 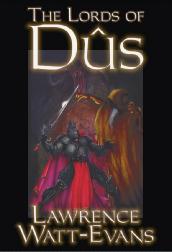 In 1974 I flunked out of Princeton's architecture department and wound up living in a run-down apartment in Pittsburgh's Oakland district, upstairs from an ice cream shop. I had no job, no money, no prospects, and was living off what little money I could cadge out of my disappointed parents. (Please note: I did pay them back a few years later.)


So what did I do with myself? Did I go out looking for honest work? Did I apply to another college?


Hell, no. I intended to get readmitted to Princeton. The rules at the time allowed this, but required that the would-be reapplicant spend at least one full year off-campus -- to get his/her head together, I suppose. So I wanted something I could do for about a year and a half.


I wasn't interested in a mere job, something to pay the bills but that wouldn't go anywhere, and I couldn't very well start an actual career if I intended to cut it off short in sixteen months or so.


And there was this anecdote I'd heard -- I don't know if it's true, and I suppose I should ask Larry Niven the next time I see him. The story was that when Niven decided he wanted to be a writer, he gave himself a year -- did nothing but write for a year, while living on his family's money. If he hadn't sold anything by the end of that time, he'd give up and get a real job.


Obviously, toward the end of the year he started selling his stories.


So I decided to try the same thing. I'd spend my time until my readmission writing and trying to sell what I wrote. If I didn't sell anything by the time I went back to Princeton (assuming I did), I'd give up the idea of a writing career and concentrate on other things; if I did start selling, I could go on while in school and get serious about it after graduation.


And the question was, What should I write?


There I was in my picturesque garret, with an electric typewriter and plenty of time and motivation, trying to write to sell. What to write?


Well, what did I want to write? What did I like to read?


Sword and sorcery, that's what. I'd discovered Robert E. Howard's Conan not long before, and Moorcock's Elric, and Lin Carter's anthologies. I decided to take all the stuff I liked and put it together.


I needed a hero. I liked Moorcock's use of a not-quite-human hero, but thought his Melniboneans were too effete, so I invented overmen -- which were, incidentally, based more on having read Desmond Morris' The Naked Ape than on Nietzsche. I took my hero's name and noselessness from Simon Garth, the title character in Marvel Comics' Tales of the Zombie.


But then I needed something for him to do. I decided that I wanted a series of errands, not unlike the labors of Hercules, but that meant he had to have someone telling him what to do. So I added a mysterious mentor figure, swiping the King in Yellow from Robert W. Chambers for the job.


Then I needed an errand. Dragon-slaying is the traditional one, but I thought dragons were passe; I wanted some sort of monster that hadn't been over-used. I considered manticores and gryphons and the like, but settled pretty quickly on the basilisk, which just impressed the hell out of me with its lethality. Petrifying gaze, toxic breath... perfect!


But even so, killing it was too easy. I'd have Garth capture it alive!


And there I was. I sat down and started writing, without any clear idea where I was going -- certainly without any real outline.


The result was a 10,000-word novelet entitled "The Master of Mormoreth," which had largely the same plot as the first 40,000 words of The Lure of the Basilisk, but rushed through it headlong, without any sort of detail.


I sent that out to Fantastic, the only sensible market at the time for short sword and sorcery, and went on working on other stuff, including several more stories about Garth.


"Master of Mormoreth" didn't sell -- I got a note from the first reader saying he liked it and had sent it on (that's who I dedicated the novel to, by the way), but I never heard back, and when I finally contacted the editor he swore he'd never seen the story. I suspect he just lost it.


Anyway, I didn't worry about it too much; I was writing a lot of stories, not putting all my eggs in one basket. I sold one short story in that time I'd allotted myself -- "Paranoid Fantasy #1," in October '74, published August '75 -- which was enough to justify further attempts later on. My application for readmission to Princeton, which was accepted, was accompanied by seventy-one rejection slips, to demonstrate that I was serious about writing and not just playing the artiste.


When I went back to Princeton in September of '75 I didn't think much about writing for awhile, but then, in 1976, I began to look seriously at the business end of it, and concluded that (a) all the money was in novels, and (b) short sword and sorcery was dead, dead, dead, but fantasy novels were doing okay.


And in May 1977 I dropped out, this time for good -- or actually, I theoretically took an indefinite leave of absence that's still going. And rather than get a real job, I set out to be a writer -- after all, I had that short story sale (and a few articles). I'd written a complete novel during the summer of '76 (the first draft of The Cyborg and the Sorcerers), and that was out making the rounds, but I wanted to write another novel, and I looked through my stack of ideas and unsold stories.


"Master of Mormoreth" still looked pretty good, and it occurred to me that I could rework the Garth series of short stories into a series of books...


So I did. Finished The Overman and the Basilisk (as it was then known) in April 1978, but didn't get up the nerve to submit it anywhere until August, when I mailed it to Del Rey.


I submitted that early version of Cyborg at the same time; it came back, rejected, right around Christmas. Basilisk didn't come back, but after a couple more months I decided it must've gotten lost, and I was never going to make it as a writer and I'd better find another way to make a living. So I gave up writing and set myself up in the mail-order comic book business.


And on May 10, 1979, I got the acceptance letter from Del Rey, offering to buy The Lure of the Basilisk if I'd make a few minor changes. Which I did. And by the way, was I planning a sequel?


And here we are.

The Lords of Dûs was first published in single-volume form by Wildside Press, ISBN 1-58715-665-2, as a collectors' hardcover with several updated appendices explaining the history of the story. The cover art is by Dalmazio Frau . There are no other complete editions.

1. The single most-often asked question: Will I ever write any more about Garth?


I honestly don't know. I did plot a fifth novel, back in 1983, but Del Rey never expressed any interest in it, so I never wrote it. I have no plans to do so. However, if Asimov could write more Foundation stories twenty or thirty years later, I'm not about to rule out writing more about Garth.


The remaining questions are all things that might be answered in that fifth volume if I ever wrote it; if you don't want to take even that one-in-a-million chance that I'll be giving away secrets you don't want to know, stop here.


2. Will Garth be accepted back into his homeland? He was an outcast at the end of the series.


Not easily, but eventually.


3. Were all the members of Aghad's following dead?


No. Dozens survived, scattered across the continent and disorganized by the loss of their central temple. They would make sporadic attempts to regroup and to avenge themselves on Garth.


4. What changes have occurred in Garth's world as a result of the destruction of the Fifteen Gods?


The lesser gods, the Arkhein, who survived, suddenly find themselves proportionately more powerful, and for a few years take the opportunity to interfere in human affairs more than before. Gradually, a new balance emerges and the gods become less whimsical once more.


Also, the laws of magic have changed. Much magic depended upon various gods, and therefore no longer works. Science, which really didn't work very well when the gods could change the rules at any time, does work--at least, when the Arkhein don't interfere.


Having the cycle of time broken, however, probably has the greatest effect on people. Under P'hul, everything anyone attempted was doomed to eventual slow failure. Under Bheleu, everything was destined to end in disaster. With the Dûs gone and the Ages ended, this sort of predestination isn't there; plans can work or not work according to how well they were devised, or ordinary dumb luck. This means that the established order, which had decayed under P'hul and been largely destroyed by war under Bheleu, can finally be replaced by new organizations.


What those new organizations would be I can't really say; I hadn't worked out all the details yet. I suspect that the trading empire that Garth started at Skelleth would become a major power, that the Yprian invaders in Nekutta would become another, and that Eramma would fall apart into several small countries.

5. Will Frima be accepted as Baroness of Skelleth?


Yes, eventually, because she has Garth with her to enforce her claim, and is pregnant with an heir. It would take some fighting to establish her position, however.


6. Will Garth achieve the immortal fame he has been seeking?


No, not really, because nothing is truly immortal. He has, however, made changes enough in the world to content him, and will be remembered for a very long time indeed.


And maybe I'll answer them.