a.k.a. "Minus Two Reaction" 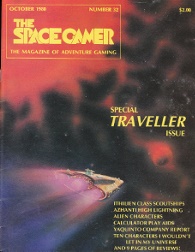 Science fiction and fantasy often involve settings where there are many different sorts of intelligent life, which ought to produce some complicated situations as to who tolerates whom. This is a brief little tale about that.

Sometimes people really do ask me that classic question, "Where do you get your ideas?" For this one I actually know the answer -- it's one of the very, very few that came to me in a dream.

I had to tidy it up a little, but that's genuinely where it came from. I woke up with it fresh in my mind and immediately wrote it down. There's at least one detail, the oxygen dispenser, that doesn't contribute a damn thing to the story, but it was in the dream and was very important there, though I don't know why, so I felt I had to include it. I still remember very clearly what it looked like.

This was one of my very earliest short story sales -- my third, to be exact, back in 1980. I didn't really know how to write short stories yet, but my first novel, The Lure of the Basilisk, was out, and I'd been approached by Forrest Johnson, one of the editors of The Space Gamer, about using my overmen in an article on non-human species other than elves and dwarves in role-playing games. I agreed, and figured this gave me an "in" I could use to sell them short stories.

They bought two, which pretty much used up my good will there. The first was "The Temple of Life," which I'd written years before, and "One Night At A Local Bar," which I had just finished, was the second and last.

To my annoyance, they retitled it "Minus Two Reaction" to provide some pretense that it had relevance in a gaming magazine. When I reprinted it in Crosstime Traffic I restored my original title. I think those are its only two appearances to date.