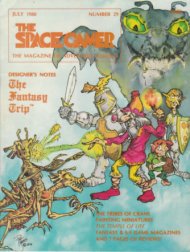 This story feels like a relic of a previous life.

I started writing this in high school. It was more or less part of an elaborate story cycle set in a place called the Rhunweyl; I don't think any of the others ever got published. Most of them never got finished. I did cannibalize a bunch of the ideas from the series in later projects, though.

The central storyline involved an exiled warlock and... well, a bunch of stuff, almost none of which is in "The Temple of Life." At one point that warlock fled into the ruined cities of the south, where he encountered a pair of scoundrels named Elihaniku and the Pad. That story ended with Elihaniku and the Pad deciding it would be a good idea to be somewhere else when the warlock's enemies came looking for him. Accordingly, they sailed off eastward on the Broken Stone, a ship Elihaniku owned, captained by a fellow named Merek.

"The Temple of Life" is one of the adventures they had during their eastward flight. Avitaine, where the story takes place, isn't even in the Rhunweyl, really.

Anyway, I wrote the story some time in the early '70s. I think I may have submitted it to a couple of magazines without arousing any interest. In 1980, though, after The Lure of the Basilisk was published, I was approached by Forrest Johnson and the folks at The Space Gamer about using overmen in an article on using non-human races in role-playing games. This led to me selling TSG a couple of stories, and one of those was "The Temple of Life," which I pulled out of metaphorical mothballs for them.

This makes it one of the four short stories I sold before I learned to write short stories. As I said, a relic of a previous life.

It's straightforward sword & sorcery, written at a time when I'd been reading a lot of Conan and Elric stories. I would do it very differently now.