You all know about Esther Friesner's series of Chicks in Chainmail

anthologies, right? If not, go check 'em out. 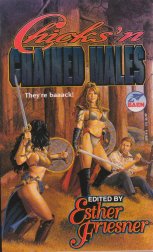 I had stories in some of them; Esther and I have been friends for some time, and of course we collaborated on Split Heirs.

The first two volumes in the series had a pretty simple premise: humorous fantasy stories about ass-kicking female protagonists. I wrote "The Guardswoman" for Chicks in Chainmail

, and "Keeping Up Appearances" for Did You Say Chicks?!

, got a bit more specific -- our heroines had to rescue men. Why should it always be damsels in distress?

I wanted to do something a little different this time, so I chose a contemporary setting and wrote a werewolf story.

Anyway, I wrote it, I was pleased with it, Esther bought it, and there we are.

Incidentally, all three of the anthologies mentioned above have been collected into a big fat omnibus: Chicks Ahoy

. I don't have stories in The Chick is in the Mail

or Turn the Other Chick

or Chicks and Balances.