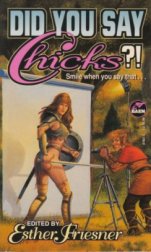 I'd had this story idea sort of kicking around the back of my mind -- and for that matter, my desk, because I did write it down -- for years, about a female wizard in a traditional male-dominated society. It hadn't entirely gelled yet, but it was getting there.

And then Esther Friesner invited me to write a story for Did You Say Chicks?!

, the second volume in the "Chicks in Chainmail" series. (I already had a story, "The Guardswoman,", in the first book, and would later have another, "In for A Pound," in the third.) This was the push I needed to actually write the thing. I added a new female viewpoint character, and that gave me what I wanted for a suitable ending. I titled it "Keeping Up Appearances," and there we are.

I hesitate to mention this, because it might be considered a spoiler, but in addition to the aforementioned premise I'd had sitting around, my other major inspiration was an episode of the original Star Trek series: "The Corbomite Maneuver."

Did You Say Chicks?!

has now been reprinted in its entirety in an omnibus with the first and third "Chicks in Chainmail" anthologies, under the collective title Chicks Ahoy

. Other than that, the story hasn't yet appeared anywhere else.