Julie and I have just completed a project that’s probably a complete waste of time, but which led to the discovery that one of my hard drives is totally dead, and also that Windows Vista is no longer supported. Here’s the story:

In 1982, on a whim, I decided we should make our own Christmas cards, rather than using store-bought ones. I drew up an all-occasion card, took it to a local printer and had 100 copies made (I think it was a hundred), and we used those for our holiday mailings.

That was well received, so in 1983 we did a card meant to look like an official notice that the recipient was required to have a happy holiday.

Pretty sure we skipped 1984. In 1985 we hired an artist for the first time and had William Levy draw us an elf with a raygun. (At the time I was writing a column called “Rayguns, Elves, and Skin-Tight Suits” for the Comics Buyer’s Guide.) In 1986 we had just moved, so we had note-cards made up with a picture of our new house, and as our Christmas card that year we hand-drew wreaths on the front door on some of the note-cards and used those. 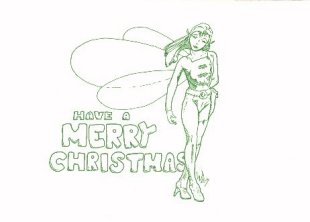 Don’t know what we did in ’87 and ’88, but in ’89 we figured that as a writer I should write us a card, and we did the Dreaded Pun Card, and ever since then custom-made cards have been a regular part of our holiday rituals. Sometimes we hired real artists, sometimes we cobbled together something ourselves, and many years, once she was old enough, Kyrith provided the art. We did skip a few years. In 1994 we started doing family newsletters, as well. And three times we sent out chapbooks, rather than cards, with short stories I had written for the occasion.

And somewhere in there, Julie decided we should keep a complete collection of all this stuff. We hadn’t kept them in any sort of order, so it took awhile to compile an album, and it wasn’t necessarily complete, but we tried. 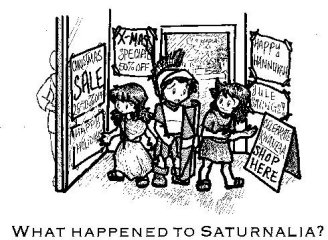 And then, when we moved in 2009, the movers “lost” one box of stuff — “lost” in quotes because we were pretty sure it was somewhere in the house, but we couldn’t find it. Most of it wasn’t anything to be concerned about — school supplies and the like — but the holiday card album was in there.

So we’ve been looking for the album ever since, and trying to keep copies of the cards and newsletters for when it turned up (or we made a replacement), but not being very organized about it.

And a couple of weeks ago Julian was visiting, and cleaned out his closet, and there was the lost box, including the album.

So now that we had it back, we set about completing it, bringing it up to date with everything from 2009 on and filling in any gaps from further back. In some cases we couldn’t find the physical cards or newsletters, but I still had the computer files and card stock, so I printed new ones for the collection. But we couldn’t find the 2010 newsletter anywhere, and there were some other problems and omissions. 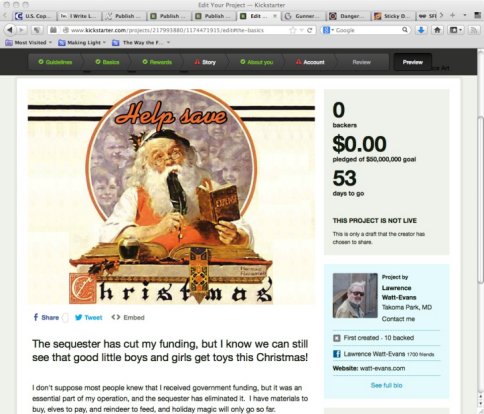 I still had the hard drive from Chloe IIIB, my primary desktop computer from 2003 to 2011, remounted as an external hard drive, and I thought maybe the 2010 newsletter would be on there somewhere (though in theory everything had been copied off it already), so I tried to boot it up and found it was completely dead. Sigh. (Elsewhere I referred to that machine as Chloe 3.5.2; that was my memory playing tricks on me. Chloe IIIB replaced Chloe III, which replaced Chloe 2.6.2, and I’d forgotten the sequence. Long story; short version, Chloe III was defective and CompUSA replaced it six days after we bought it with Chloe IIIB. Chloe II had been custom-built and went through a lot of upgrades during the period I owned her — roughly 1994 to 2003 — and was Chloe II Version 6.2 by the time I replaced her, Chloe 2.6.2 for short.)

I found some of the old files we needed were in formats that can’t be accessed by any modern software. Fortunately, I still have Iris, a laptop running Windows Vista, which can run old versions of Microsoft Publisher and buttonFile and the like. So I booted up Iris for the first time in months and she went nuts trying to update her version of Windows, which is how I found out Vista is no longer supported. It took several tries to calm Iris down enough to run Microsoft Publisher and access our 2001 card.

But we eventually did track down pretty much everything except the newsletter file for 2010, and the album is now complete and up to date, unless there are cards from 1987 and ’88 that I’ve forgotten.

(And by the way, that 2013 card? I set up a real Kickstarter account and campaign to get that screenshot. Never took it live, of course.)