This is when things got elaborate.

Cathy’s real name is Li Qing. The Li family is from a town called Jiande, a couple of hours from Hangzhou.

The Li family is, in fact, one of the nine families that founded and still dominate Jiande. I’m not clear on the history, but apparently at some point the nine families fled from somewhere else and settled in what’s now Jiande, founding the town. They allowed others to settle there later, but maintained certain exclusive rights to the river. Only members of the nine families can do their laundry in the river, for example — and some of them still do, as we observed when we were there. And only members of the nine families can be married on the river. And when they do get married, it’s a big deal.

We hadn’t known any of this until we got there. We knew that Cathy’s family was planning a hometown ceremony so that her three surviving grandparents and various other family members who couldn’t get to Hangzhou could see it, but we hadn’t realized how significant this was. All we knew was that we were taking a bus to Jiande, where there would be a ceremony involving boats on the river. 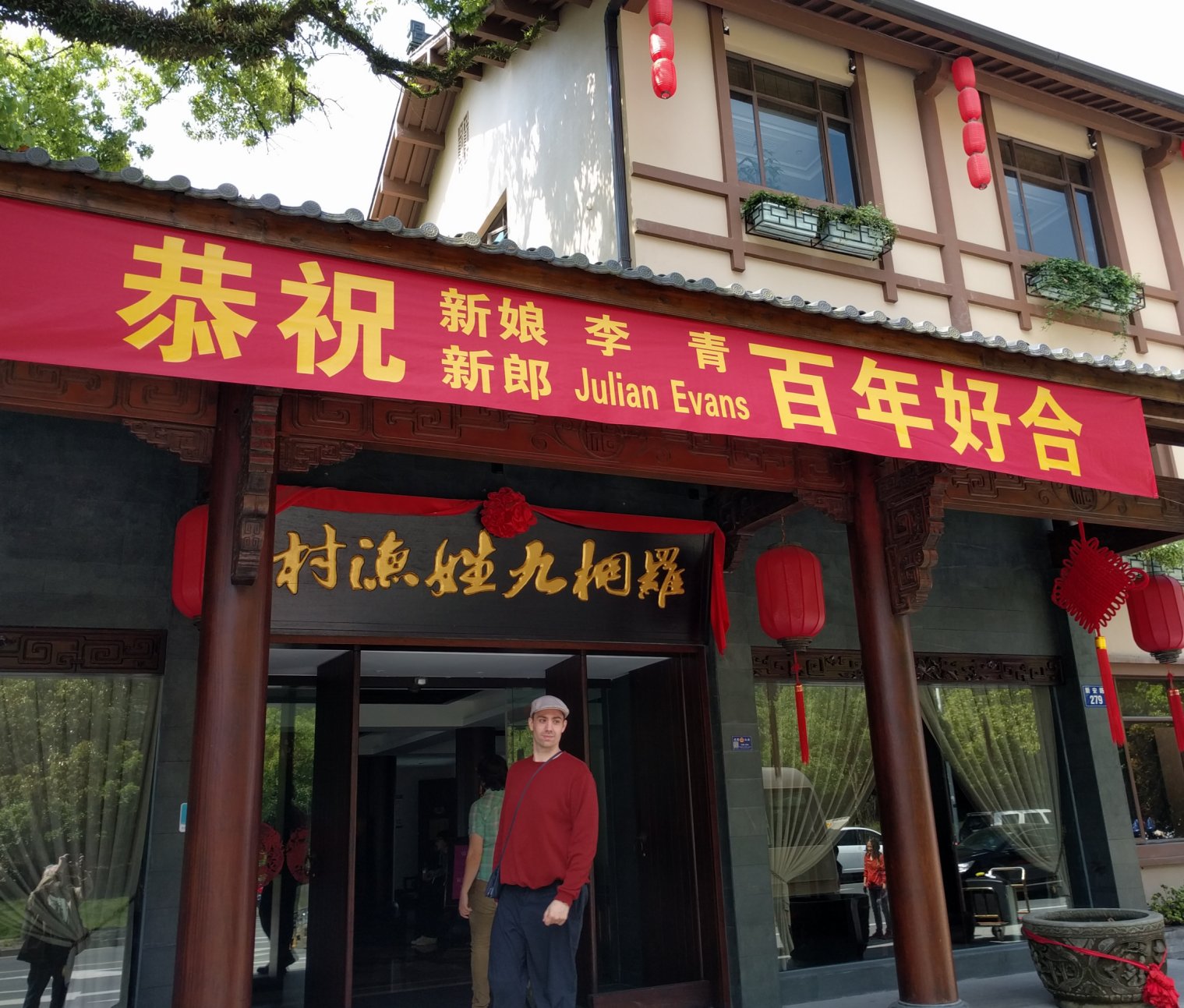 But when the bus delivered us to the hotel, we began to realize. The hotel had a big banner across the front announcing the wedding of Li Qing and Julian Evans; the wedding guests occupied pretty much the entire hotel. In the lobby, while we were getting checked in, I noticed there was a video playing on a loop showing a hugely elaborate ceremony with dancers and drummers and so on, including people holding huge shrimp puppets over their heads. “At least we won’t be doing anything like that,” I thought.

I was wrong. Cathy’s family had gone and booked the whole package. There were these nine ceremonial boats moored beside the hotel, and Julian said yes, those would be used for the wedding — two of them, anyway. He pointed out that each boat had a banner bearing the character representing one of the nine families — except one, where the ordinary banner had been replaced with one reading “EVANS.”

Anyway, we settled in on Sunday night, and spent Monday morning exploring the town, which is unremarkable as modern middle-class Chinese towns (or small cities by American standards) go. There’s a town square with decorative pillars, a coffee shop, a New Balance store, and so on. There’s the riverfront. And then around mid-afternoon we were gathered out on the river beside the hotel, and the wedding began. Drums were set out on a red carpet; recorded music began playing, and several women in bright red robes began a vigorous drum accompaniment.

When that was done the drums were whisked away and nine young women in these peculiar tabards marched out and moved around in various patterns, displaying nine characters. Only well after the fact did someone explain to me what should have been obvious — the nine characters were the names of the nine families. This was a demonstration that this was all done by the consent of the masters of Jiande, I guess. Then the master of ceremonies appeared, a man in a white suit and red sash, who lip-synched a song that I’m guessing was a song of welcome, but since it was entirely in Chinese I’m not really sure. Next was a troupe of six young pretty women in white gowns, carrying (and sometimes wearing) red gauzy veils as they danced. Very traditional Chinese dancing, and quite lovely.

They were followed by a middle-aged woman in purple, and someone was kind enough to tell us that this was the town matchmaker. After an introductory dance and speech she brought a few young women out onto the red carpet, and at the other end the master of ceremonies (remember him?) brought out Julian, in his red wedding shirt with a big red bow on it, and Schuyler, Julian’s best friend and groomsman, as his attendant. 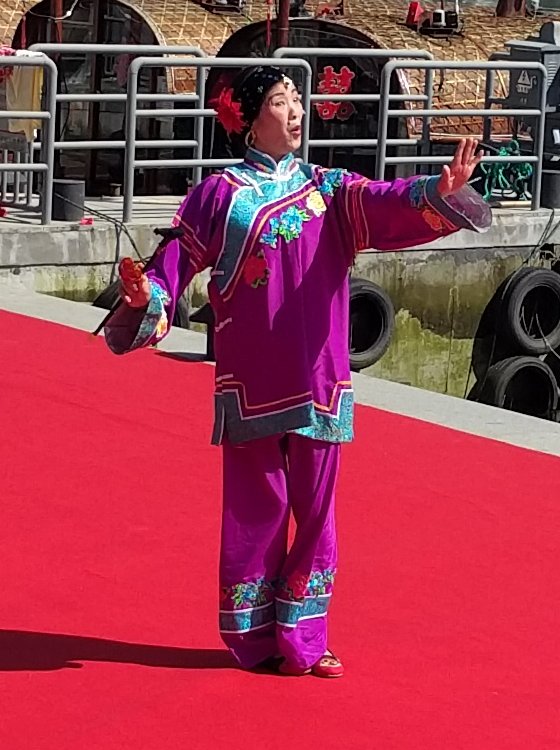 The matchmaker presented her young women to Julian, but he turned them all down with a “no, no, they won’t do” gesture. (That didn’t need any translation.)

The matchmaker looked thoughtful as Julian started to turn away in disappointment, and then called him back. She pointed out on the river, clearly indicating, “I have one more!”

And out on the river was the boat flying the Li family banner. The matchmaker, the MC, Julian, Schuyler, and the rejected maidens all stepped to the edge of the river and began beckoning, and the Li family boat came in to dock. Cathy emerged from the interior wearing a red veil and stood in the prow, and Julian nodded his approval of this final choice. 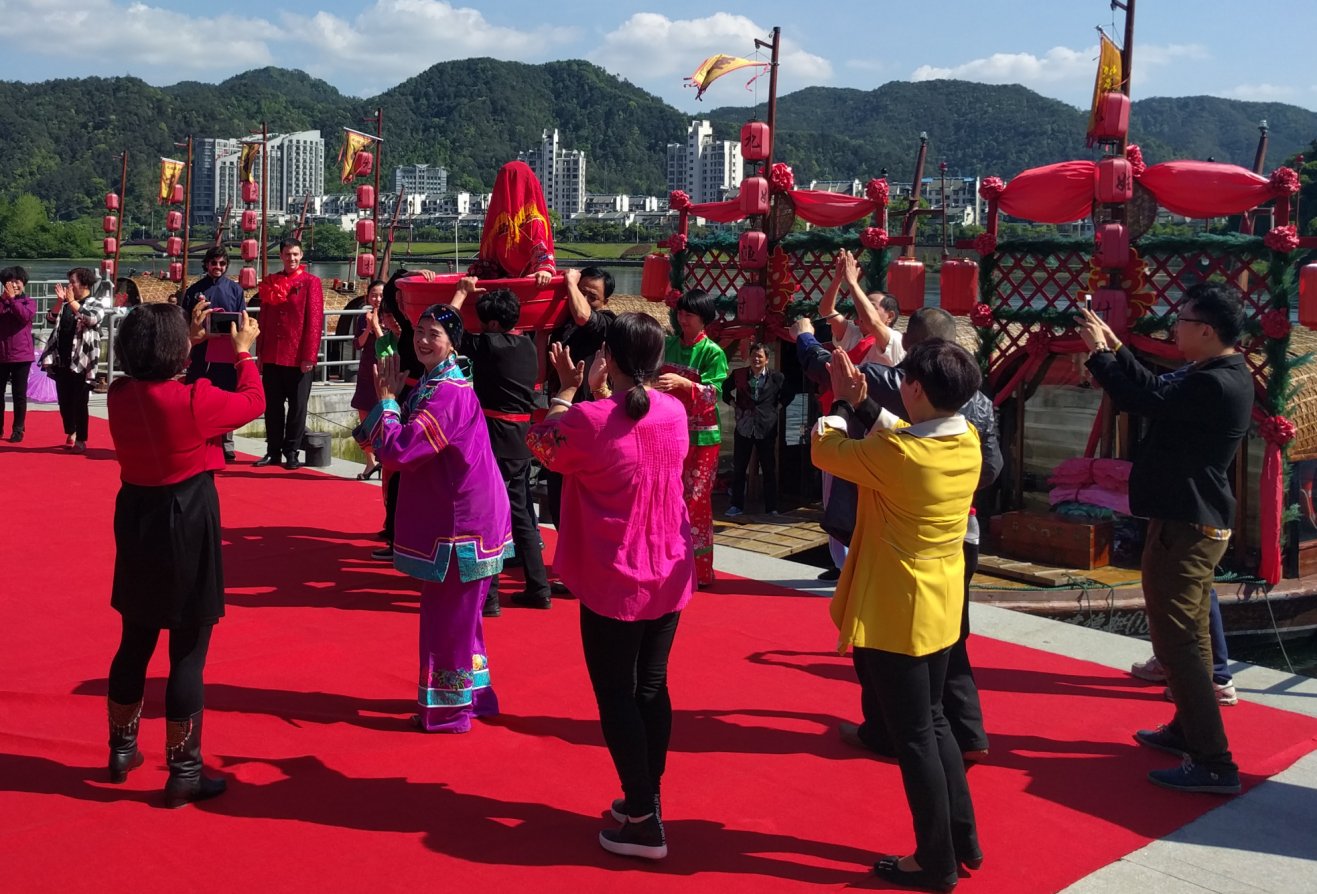 The boat crew then transferred a chest and a pile of folded silk, representing Cathy’s worldly goods (or dowry, I got conflicting explanations) from the Li boat to the Evans boat. Cathy herself was then brought ashore in a big red tub carried on the shoulders of four men, paraded around, and then set down in front of Julian. The matchmaker presented her, Julian accepted, the MC made a brief speech; the veil was lifted, and the happy couple kissed.

And then the dancers and the rest of the wedding troupe brought out these giant prawns from somewhere — I never did figure out where they had been stashed — and distributed them to the families of the bride and groom, and we all danced around like lunatics holding these giant shrimp over our heads, which was actually a lot of fun, and that concluded the ceremony. After about an hour, giving us time to freshen up, change clothes, or whatever, we were then gathered in the hotel’s dining hall for the wedding feast. I think this time we got the full thirty courses. We also passed around a bottle of baijiu, China’s most popular liquor — what wine is to France or vodka is to Russia, baijiu is to China. I’d heard that it ranged from cheap rotgut that workmen drank after a hard day’s labors to outrageously expensive fancy stuff that was only used as gifts to impress people; what we got was in the middle of that range, and I was surprised to discover that I liked it quite a bit, and it went down easier for me than, say, whiskey.

There were toasts and jokes and small gifts exchanged, and everyone ate too much but eventually wandered off, sated; I think to some extent wedding feasts are pretty similar everywhere.

A quick note or two: Why are there nine boats when we only needed two, and one of those never left the dock? Since they shuffle the family banners around as needed, do they really need all nine?

Well, yes. Because there are different levels of wedding. If you thought the one I’ve described was elaborate (which it was), there are others that are more so, and for the top tier the transfer of goods and bride is done in the middle of the river rather than at the dock, and the guests are on the other seven boats in a circle around the two directly involved.

The dancers, drummers, MC, matchmaker, and so on are all hired as a package deal. I don’t know how many different options they offer, or where on the scale this one fell; it was all handled by Cathy’s parents.

Anyway, Tuesday morning we were loaded on a bus back to Hangzhou, and the Chinese portion of the wedding was over. Part Five was up to the American side, i.e., us.