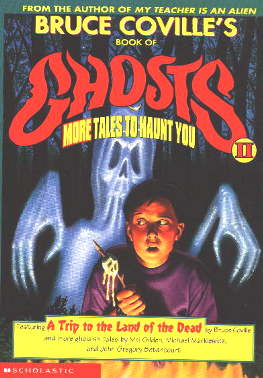 That was George Pinkerton, the small-town librarian from Springfield, Indiana who stumbled into a career as a monster hunter.

"George Pinkerton and the Bedtime Ghost" is unique in that it was not a bedtime story originally -- it's the only one in the series that was created fresh for publication. That was because one of the books I wanted to sell to was Bruce Coville's Book of Ghosts II, and there weren't any George Pinkerton stories about ghosts.

So Julie and I sat down together and plotted this story, then I wrote it up, and Bruce Coville bought it. It's perhaps the gentlest of all the Pinkerton stories, and appeared in Bruce Coville's Book of Ghosts II.

Someday I hope to assemble an entire volume of Pinkerton stories, but it hasn't happened yet, so "George Pinkerton and the Bedtime Ghost" has never been reprinted.