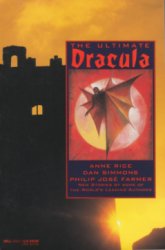 One day I was sitting at my desk when the phone rang. It was an editor I knew (right now I can't remember whether it was Marty Greenberg or John Betancourt or possibly even Keith DeCandido) asking if I happened to have an unsold Frankenstein story on hand. Or Dracula.

I said no, but I could probably write a Dracula story if I had a reason to.

At the time, $500 for a short story was very good money, so I asked for details. I didn't get very many then, but I heard a story later to explain it, though I can't attest to its accuracy.

, and The Ultimate Werewolf

. Byron had then assigned a junior editor to actually assemble these volumes.

That junior editor was in over his head, and did not manage to get the books ready; in fact, he quit without warning about three weeks before the books were due at the publisher, and each was only about half full. The big names were there, but the wordage to fill the volumes out to the required length was not.

Byron had called in the reserves, putting all available hands to work to get the books finished in time, and one of them called me. A Dracula or Frankenstein story, no further specifications.

I had no Frankenstein or werewolf ideas, but Dracula -- I've been a Dracula fan since I was a kid. I was very familiar with both Stoker's vampire and the historical Vlad Tepes. I had been thinking about the likelihood that your typical 15th-century Romanian peasant was probably more scared of the human Prince Dracula than of the supernatural nosferatu; there were well-known ways to keep vampires away, but if the Impaler wanted you dead, you were as good as on a stake.

went on to be very successful, with multiple editions in English and translations into several languages.

That success led to extending the "Ultimate" series, and I got to write stories for three of the four volumes in the second batch -- "Larger Than Life" in The Ultimate Zombie

, "The Pick-Up" in The Ultimate Alien

, and "Sirinita's Dragon" in The Ultimate Dragon

Of course, I've collected all my vampire stories in In the Blood