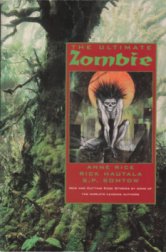 "Larger Than Life" was my story for The Ultimate Zombie

It was actually my second attempt; I started a story called "Undying Love," but then I decided the ending wasn't going to work, and the story was getting too gross for me, so I put it aside and wrote "Larger Than Life" instead.

I'd like to give some cute little anecdote about where I got the idea for the story, but the truth is, I don't know. After abandoning the hideously morbid "Undying Love" I wanted to do something light, but how I decided to write about a movie crew -- I dunno. It just happened.