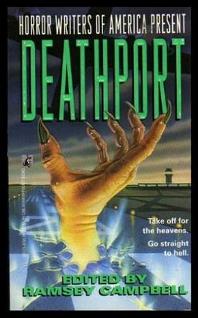 In the 1990s HWA put together a series of anthologies, published by Pocket Books, that were quite successful and brought in a bunch of money for the organization. These each had a celebrity editor who devised a set-up or theme -- the first one, for example, was edited by Robert McCammon (with help from Martin H. Greenberg and his crew), and the premise was that all the stories were set in a world ruled by vampires. The title was Under the Fang.

I didn't get around to submitting anything to Under the Fang, or to F. Paul Wilson's Freak Show, but when Ramsey Campbell sent out guidelines for his anthology, set in a haunted airport in Texas, I decided I wanted in on this one.

The working title was Beneath the Tarmac.

I read the guidelines, which had this elaborate backstory about Aztecs and Comanche ghosts and haunted men's rooms and severed heads, and decided to ignore it, because (a) Ramsey Campbell's a Brit who probably didn't actually know much about Texas or Comanches, (b) I don't know much about Texas or Comanches, and (c) all the other writers trying to sell to the anthology would write that stuff, and I'd do better if I took a different slant on it.

My first try was a story about being lost in the airport, a guy never being able to find the right gate for a flight that's constantly being delayed or moved, and not being able to find his way out, either. That didn't quite jell, though, so I put it aside (it's still in my vast collection of unfinished stories).

That may be when I started one about fear of flying that eventually became "The Worst Part" but that, once again, didn't quite jell right away. I'm not 100% sure that was for this anthology, though. In any case, after two incomplete attempts (one's still hanging fire) I put it aside for awhile.

In the end I went back to basics, looked at the title of the anthology and the stuff in the guidelines about the oppressive Texas heat, and wrote "Beneath the Tarmac," about the ghosts of the dinosaurs whose flesh had become the tar used in the asphalt of the taxiways.

That worked, and I had my story, and what's more, it was the title story!

Except then the publisher changed the title to Deathport, and it turned out to not be a very good anthology. Oh, well. At least I hadn't written about severed heads in the men's room.

The story was eventually reprinted in my collection, Hazmat & Other Toxic Stories.