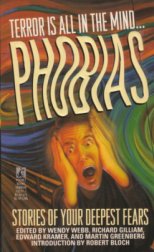 I was invited to submit a story to an anthology about fear, to be called Phobias

I don't happen to have any severe phobias, but not long before this I'd messed around with a few ideas for the HWA anthology that was published as Deathport

, so I had airport scenarios on my mind. I'd made a couple of false starts before writing "Beneath the Tarmac," so I looked at those.

The first one was meant to be a sort of nightmare, where the protagonist is searching for his gate for a flight that's already boarding and can't find it, it's always down another corridor or around another corner, and I hadn't really gotten that to work (which is why it didn't wind up in Deathport)

, but there was another one about someone afraid of flying...

That worked. I finished it up and called it "The Worst Part."

One reason I hadn't finished it for Deathport

was that it has no fantasy elements, no science fiction or horror angle -- but that was a plus for Phobias

So there it is. A story about fear of flying that doesn't have a single scene aboard an airplane.

And the anthology was a success, so there was a second volume, and I have a story in that one, too -- "Impostor Syndrome." It doesn't have any fantasy elements, either.

"The Worst Part" is also included in my collection, Hazmat & Other Toxic Stories.