Hi there! I'm Lawrence Watt Evans, better known by my pen name, Lawrence Watt-Evans. I'm a semi-retired professional writer of fantasy, science fiction, horror, and just about anything else I can get paid for. If you're interested in the professional side, though, you're in the wrong place, as this page is about the personal side.

Except for my profession, I'm a pretty boring guy. I've got a wife named Julie, a daughter named Kiri, and a son named Julian. At the moment we have no pets, though we've usually had a cat or two. (Some past pets have their own webpages: Chanel, a cat; Billy-Bob, a snake; and Spot, a gecko.)

We own a home on Bainbridge Island, Washington; we moved here in early 2020, after more than thirty years in the Maryland suburbs of Washington D.C. The island is beautiful, across Puget Sound from Seattle; it's about a forty-minute ferry ride to the city.

I own half of a small chain of comic-book shops, though now that we're on the other side of the continent I'm looking to sell. If you dig around on the Misenchanted Page you'll find I formerly owned half of Deathrealm (a now-defunct magazine) and part of The Olde Towne Tavern and Brewing Co. (a brewpub), but those are gone now.

If you really want to know more about me or my family, well, there's "About the Author," and some of the various articles I've got on here, notably "My Haunted Home" and "Dr. Wertham, EC Comics, and My Misspent Youth: In Search of the Unholy Grail," are autobiographical. I've also got a slew of trip reports about our vacations and the like.

Some brief autobiography: I was born in Arlington, Massachusetts in July of 1954 -- right about midnight. Legally, I was born on the 26th, but that's Daylight Savings Time; by Standard Time I was born on the 25th, so I've always considered my birth date to be optional.

Until August 1958 my family lived in Billerica (pronounced "Bill-RICK-ah"), in a now-long-demolished house that had once been a nightclub. I don't have any pictures of that one, unfortunately.

From 1958 until I went off to college in 1972 we lived in Bedford, Massachusetts, in a big old Victorian house we called the Wolery, after Owl's house in Winnie the Pooh. (The picture on the other end of that link was taken after we sold the house; the new owners repainted it to an approximation of its original Victorian color scheme. It's gorgeous, a classic "painted lady" -- eight different colors! When I lived there it was just white with green shutters.)

My father, Gordon Goodwin Evans, taught chemistry at Tufts University until his death in 1980. My mother, Doletha "Teddie" Evans, was the secretary for the First Parish in Bedford until her death in 1990; an addition to the church building was named in memory of her.

I was the fourth of six kids. My sister Jody died in 1986, but that leaves me with three sisters and a brother. The six of us were Marian, Bill, Jody, me, Ruth, and Charlotte. Most of them don't have webpages for me to link to, but Ruth does. I have assorted nieces, nephews, and in-laws, but I won't go into details here.

I married Julie F. Evans (nee McKenna) in August of 1977. We have two kids, Kyrith Amanda Evans and Julian Samuel Goodwin Evans. I'm limited in what I can say about them without their approval, but I've got a few basics on the other end of those links.

That's about it on the personal stuff, really. There are one or two other items, but they're sort of hard to explain -- Super Medic, for example. (Don't ask, okay? If you really have to know, go read the page.)

If there's anything you'd like to see here that isn't, feel free to ask. 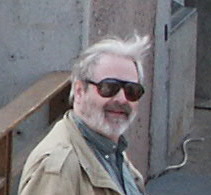