The next step in the evolution of evil...

A Horror Novel by Lawrence Watt-Evans

One hot summer night Ed Smith was unable to sleep. He thought he was having a waking nightmare when he saw a monstrous face at his window at 3:00 a.m., but when the sun rose hours later his neighbors had all vanished, and as the police investigated the disappearances Smith wondered whether there was a connection.

The missing people turned up later that day - or did they? Because they weren't quite right, and gradually Smith realized they not only weren't his neighbors, but weren't even human - they were the creatures he had seen that night...

Publishing history for The Nightmare People:

A few quotes from the reviews:

You can also read some unsolicited reader comments on Amazon 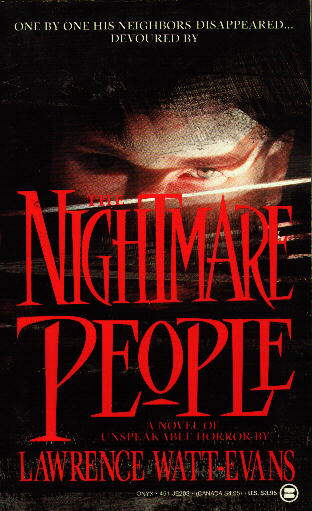 I have always liked horror stories, but when I was a kid, although he never said anything directly that I can recall, my father made it plain that he didn't think much of horror. I read what I could get my hands on - Poe, Matheson, Bradbury's Something Wicked This Way Comes - but it was always sort of a guilty pleasure, and I never dared actively seek it out.

(I later found out that my mother had been a horror fan back in the 1940s, before marrying my father, and after Dad died she filled the house with the works of Stephen King, Dean Koontz, and John Saul, so I guess that's where I inherited it.)

Once I left my father's house, though, I gradually expanded my consumption. I saw the classic horror movies (and some that weren't so classic), collected horror comics (I once had a complete set of the EC titles from the 1950s; alas, I sold them when I needed money one year), read Stephen King and Anne Rice and the rest.

And I came to two conclusions. First, that I wanted to write the stuff, and second, that the traditional monsters - vampires, werewolves, zombies, serial killers - had All Been Done, and I wanted to come up with something new.

Various elements accumulated in the back of my head. Michael Whelan's painting "The Smiler with the Knife" provided something of the appearance I wanted, though I modified it considerably.

Dracula in terms of how its images reflected Stoker's Victorian society - and I'm sorry, but I don't remember where I read it, who wrote it, or anything else useful - suggested that part of the appeal of the novel lay in how its protagonists were forced to do forbidden acts - violence, blasphemy, seduction - in order to defeat the vampire's evil, forced to use evil to fight evil, and that got me thinking about how a modern-day monster would need to fit a different model. Our ideas of what's evil, and what's forbidden, have changed.

And then, when I'd had time to assimilate all this, I had my monsters.

And after that the story was ready in my head, and I wrote it, during the summer of 1989 - which is, of course, when it's set, so the references to weather, radio, TV, and so on are all exactly accurate. I set it in my own hometown, more or less - Diamond Park, Maryland does not exist (if it did it would be located in what's actually a state park), but all the other locations are real.

I made it as real as I could - and apparently succeeded, since after the book was published I did get one late-night phone call from a young man living alone in an isolated home, who wanted reassurance that it was fiction...

The air was hot and thick, heavy with moisture, and he lay unwillingly awake beneath its weight, his bedsheet soaked in sweat. The ceiling was gray and blank above him when he opened his eyes. When he closed them and tried to sleep, or pretended to try, he saw only a darker gray.

He thought he could almost hear the air moving about him, a slow, sluggish, viscous movement, like the shifting of wet sand, and he wished that his clock-radio were an old-fashioned wind-up alarm clock, so that at least he would have the ticking to mark off time for him. As it was he lay in an infinite timelessness, feeling the perspiration ooze from his back into the mattress.

He forced a sigh out into the air above him and turned his head. The glowing red digits on the clock read 3:09 AM.

There was no point in pretending he could sleep, he decided. It was too hot, too humid, the air too still and the silence too deep.

He could sleep later, by daylight, after he had dragged someone from Maintenance up to fix the air conditioner. He was almost two weeks ahead at work, and half the department was off at the beach anyway. No one would care if he took Wednesday off and slept all day.

If his bedroom stayed this hot, however, he was not sure whether he would ever sleep again.

He wondered whether the outside air had cooled off enough to be better than the air in his apartment. He had carefully hoarded what little coolness remained since his air conditioner had failed, but now, he admitted reluctantly, it was gone. It was time to open the windows and gain whatever benefit the warm, foul outside air might hold.

Wearily, he swung his legs off the bed and leaned forward, his arms resting on his thighs. Breathing required a conscious effort.

After a moment's rest he stood up and took the one step necessary to reach the window. He stretched out one hand, groping in the gray gloom, and found the drawcord of the drapes. He tugged, and the drapes slid away from the window, revealing the streetlighted world beyond.

Something was blocking his view.

With a shock, he saw that eyes were staring in at him, glowing red eyes beneath a blue-black slouch hat, eyes that were too large to be human, set in a dark, bony face, a face too long and narrow to be human.

He stared back, too surprised to react.

The misshapen red-eyed face parodied his surprise; the eyes widened like his own.

There were no whites, and the pupils were vertical black slits in scarlet that blazed like neon.

Between the eyes was a mere sketch of a nose, a narrow grey ridge down the center of the face, ending in two large, open, sharp-edged nostrils.

Below that, thin black lips rimmed a pursed little slit of a mouth.

Above that face the hat was like a patch of starless night sky, a heavy, old-fashioned hat that made no sense at all on a hot August night.

For a moment he tried to tell himself that it was his imagination, or a distortion of his own reflection, but then the apparition smiled at him, a humorless grin revealing long needle-sharp teeth, far too many teeth, gleaming pale gray in the darkness. That was not his reflection, distorted or not.

A misshapen, attenuated hand appeared, one black, clawlike fingernail touched the brim of the hat in sardonic salute, and abruptly the thing was gone, sliding suddenly away in a direction the man inside the bedroom could not identify.