[This is a piece I wrote for Dancing with the Dark, (Vista 1997) a British collection of accounts of writers' actual encounters with the supernatural, edited by Stephen Jones.]

I was born at midnight between two days in July 1954, and grew up in a small New England town -- the sort of place H.P. Lovecraft wrote about. There was, in this town, a house the local kids thought was haunted -- it was a big old Victorian monstrosity, with a long, ornate porch, bay windows, tall shutters, stone steps, stained glass in the front doors, a tower on the front, overgrown with assorted greenery, usually in need of paint.

That was my house.

My parents had six kids. My father was an associate professor of chemistry, and my mother a church secretary -- respectable occupations, but not all that lucrative. The only way they could afford a house big enough to accommodate us all comfortably was to buy something very out of style and in visibly poor repair. Which they did, and which they lived in comfortably for the rest of their lives.

It made my childhood interesting. I grew up hearing, "You live there?" And, "Is it haunted?" Or, "I heard it's haunted." Or, "Are there any secret passages or anything?" (Alas, there weren't, though there were some odd corners.)

Hallowe'en was glorious there. We accumulated props -- as a boy I built a coffin out of scrap lumber, and we used that to hold the candy we handed out. A nearby building that had been a butcher shop a hundred years before was bulldozed, and a cache of old beef bones was turned up underneath it; we appropriated several, mostly leg-bones, and used them for our decor. In two of them the marrow had dried out in just the right way to create a candle-sized socket, so we would light the front hall with candles, some in wrought-iron candelabra and some in improvised bone sconces. (The jack o' lanterns were in the other rooms.)

When you actually live in such a place it's easy to play with spooky imagery, hard to take it seriously -- but many of the neighbors really did think our place was haunted.

What was interesting was that the families who had lived in the area the longest didn't say the house was haunted; they said our barn was haunted. Allegedly, at some point in the 1890s a pair of sailors jumped ship in Boston and wandered the twenty miles out to our neighborhood, drinking heavily the whole way. They chose our barn to hole up in and sleep it off, but got into a fight, and one of them fatally stabbed the other, then fled and was never caught. The ghost of the murdered sailor was said to haunt the place still.

There's absolutely no documentary evidence for any of this, but some of the neighbors swore to every word of it. I heard the stories, of course, but never took them very seriously. 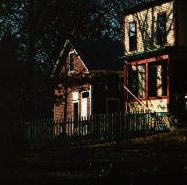 The house, which I've already described, was built in 1851; the barn was added much later, possibly in 1881 (major renovations were done that year), and was comparatively nondescript. No towers, no gingerbread, no stained glass, no carved granite steps. It wasn't particularly traditionally barnlike, either -- no multi-angled roof, no red paint anywhere. It looked more like an overgrown garage, with peeling white-painted clapboards and dark green sliding doors on rusted metal tracks; I suppose it was a carriage barn, really.

It was a wonderful place to play, haunted or not -- it held a century of clutter. Old doors, off their hinges for decades, made great ramparts for forts; an antique trunk could serve as a spaceship or lifeboat. We jumped out of the hayloft and somehow never injured anyone. We once assembled a full-scale ship's deck in the hayloft out of junk, using the rafters as spars. At one point I teamed up with two of my sisters and some of the neighbors to turn one back section into a full-fledged funhouse; we charged a dime admission and turned a tidy profit.

We never saw any spooks.

Until one fall afternoon I went out to the barn, looking for something to do, mulling over possibilities for some other major project we could undertake there, like the ship or the funhouse. I think I was twelve or thirteen. I climbed the stairs to the hayloft (yes, stairs, not a ladder; I said it wasn't very barnlike) and looked around.

The loft was virtually empty at that point; my father had noticed the floor sagging, and had removed all unnecessary weight from it until repairs could be made. The two big trap doors through which hay could be flung down, and the two outside doors where bales would be hauled in, were all closed. It looked like a big empty attic, dimly lit by two windows high at either end. Dust was dancing in the sunlight from the south window. I stood in the center and looked around.

Something white was moving in the shadows in the southwest corner, something four or five feet tall and indistinct. It moved from the corner over toward the stairs in the southeast corner, and then vanished.

I don't know what it was. It looked like a patch of fog, really -- but how could there be a patch of fog inside a closed-up barn? Why would it be shaped like that, roughly four feet tall and one foot wide? And why did it move in utterly still air? How did it vanish?

So maybe I saw a ghost. At the time I didn't even think of that -- I saw something mysterious, but a ghost? After spending my life in a "haunted house," I didn't believe in ghosts. The whole murdered sailor story sounded stupid to me.

But what the hell was it?

I didn't play in the barn much after that. Maybe I just outgrew it.

Additional comments, March 15, 1999: The picture at the top of the page is the house described as it looks now, not as it looked when I lived there. The new owners have cleared away the trees and bushes from the front, and taken down the remaining shutters -- several were already down for repairs by the time I moved out. And as you can see in the small inset picture, they've painted the barn red!

And while all the above is true, the last line is misleading, added for effect -- I stopped playing in the barn because I outgrew it, plain and simple.