Why is it called "the Misenchanted Page"?
It was my wife's idea, actually. When I first got my own webpage back in 1994 the World Wide Web really seemed magical, so calling it "enchanted" seemed reasonable -- but given how sloppy I am, and that I'd written a novel called The Misenchanted Sword, we went with "Misenchanted."
What all have you got on here, anyway?
Damned if I know; it's accumulated for more than twenty years now, and I long ago lost track of what's here. There's a sitemap, but it may be out of date. I've started redesigning the site half a dozen times and never completely finished the job, but it's close now.

I really do try to keep it cleaned up and reasonably organized, but I'm not going to promise anything.

I remember seeing something on here once before, but now I can't find it; did you take it down?

Maybe. I move stuff around and update it, but I almost never completely remove anything; I try to always leave a redirect so that old addresses still work. If there was an article or image on here, it's almost certainly still here somewhere -- but I may not know where any better than you do.

Pretty much the only stuff that actually gets removed is broken links (when I notice them), or dated announcements that are replaced with more current ones, and even then I'll usually keep the images around, even if you can't find them anymore.

I keep hoping that someday I'll get it all sorted out and provide a proper directory, but don't hold your breath.

So what's up with the Guestbook?

It's gone. But Archives survive.

Early in 2017 I had to relocate my entire website because SFF Net, which had hosted it since its creation in 1995, shut down. My new host (1&1) doesn't offer guestbook software, and virtually no one used it anymore -- there were exactly three posts in all of 2016, and one of them was from me, answering a question.

I figured that if anyone wanted to talk to me, they could use Facebook or other social media, so I let the Guestbook die in the transition.

What's that little doodad I see up in the corner sometimes?

That's the "Remove frames" glyph -- it's supposed to be a lightning bolt breaking a picture frame, and it's loosely based on one of the logos used by the Manhattan Project during World War II, depicting a lightning bolt shattering a chain.

The glyph means that if you've gotten the page in a frame somehow, you can remove all the other frames and get only that page by clicking on it. There are one or two pages on the site that use javascript to force the removal of frames, but generally I always preferred to leave it up to the user.

Frames are sufficiently rare and obsolete now that starting in April of 2015, I've been phasing out the "Remove frames" glyph; it should be gone entirely by now, but I might have missed a few.

What about that big image of the word "Placeholder" that used to show up some places?

What that means is that I haven't yet written up the page that's supposed to be at that URL, but I wanted to show something better than a "404: Page Not Found" error. Usually I've pasted in an old file in addition to the "Placeholder" logo; these files are out of date, but do have some of the basic information and relevant linkage.

I don't think I have any at the moment; it took years, but I did finally bring those all up to date. There may still be one or two.

So what's with the "Spiffy" and "No Frills" stuff I saw mentioned somewhere?

Some time back I came across a website pointing out that the visually-impaired do use the web, and that most websites aren't designed to accommodate them -- designers rely on their visitors being able to see images, to distinguish red from green, to see text on a colored background, and so on.

I like to think I'm sensitive to the needs of my readers, so I decided to split off a black-on-white, text-only version of most of the Misenchanted Page, providing the same content in a form that would be accessible to the blind, the color-blind, people using Lynx or with really slow dial-up connections, etc. And about that time I was also starting to get more interested in seeing what could be done with tables, frames, colors, and fonts -- up until then I'd deliberately kept everything on the Misenchanted Page very simple, for the benefit of people using outdated computers. By providing the "No Frills" version, I felt I had done enough for them, and could afford to get fancier with the regular version, which I therefore called "Spiffy."

not visually impaired or running '80s-vintage equipment were using the "No Frills" side because they falsely assumed that "Spiffy" would involve Flash animations or other bandwidth-hogging nonsense.

I don't use Flash or Shockwave, and I resented having readers actively avoid my design work. Yes, the "Spiffy" side used frames and javascript and had a few fairly large image files, but I didn't consider it excessive. It certainly wasn't as gaudy as most corporate sites.

The "No Frills" side had already gotten badly out of date, since it's staggeringly boring to work on, and I knew I was never, ever going to keep it as current as the "Spiffy" side, so that discovery convinced me to abandon the whole idea.

I think I've killed off the "No Frills" pages completely now, except for having pages at the old addresses that send you to the current version. These days (like everyone else) I use cascading style sheets for colors and layout, and modern browsers provide options for the visually-impaired to get stripped-down content.

I've also eliminated the use of frames, replacing them with style sheets, as well, as I know some people find frames annoying. Frames have their uses, but I did run into esthetic problems in designing with them, and CSS works better. If you find anyplace that still uses frames, or that's still a "No Frills" page, please tell me.

The javascript stays -- but most browsers can turn that off. (You'll miss some pretty pictures if you do, and possibly some small text bits, but nothing very important.)

I'm using Konqueror/Safari, and on some pages the text is dark blue on black, which is very hard to read. Why did you do that?

I didn't. Konqueror and Safari have something wrong with the way they parse the style sheet on some pages, but I can't figure out what they're doing or how to fix it. That text is really a very pale yellow.

I'm moving away from black backgrounds, but I'd suggest switching to Mozilla/Firefox, or some other browser that doesn't have stupid problems built into it.

So is the home URL http://www.watt-evans.com/, or something else?

It's http://www.watt-evans.com. Originally the entire Misenchanted Page was in the SFF Net People Pages, but I acquired the watt-evans.com domain years ago and gradually transferred content. I think I now have all the old material on either watt-evans.com or ethshar.com, or possibly misenchantedpress.com. I used to have redirects on the old site, but SFF Net went out of business in March of 2017, and those went away.

I'm not using subdirectories much anymore, as it got too confusing trying to find things. I did use them extensively on the old People Pages site because the software and connection I was using at the time were so slow that using one large directory made uploads a pain in the butt. These days I have a broadband connection and it's not an issue.

I tried using an e-mail link, and it didn't work. What's up with that?

Over the past twenty-plus years I've used at least half a dozen e-mail addresses, and unfortunately, most of them don't work anymore, and I haven't kept all the links up to date.

My actual e-mail address is misenchantedpress@gmail.com. If you try a link and it gives you any other address, it's out of date.

I think I've finally found and removed all the links to lawrence@clark.net; that was my e-mail address for seven years, and I hadn't ever intended to give it up, but Jamie Clark sold ClarkNet to Verio, and they dumped their residential customers, so I didn't have a choice. If you send e-mail to that address I don't know whether you'll get any response at all; I've turned off forwarding, though, so it didn't reach me. I did not get it.

I've tried to clean out the links to lwe@sff.net, too -- SFF Net shut down in March of 2017 -- but those should still forward to me, at least for awhile. I'd had that address for over twenty years, and it was my primary one, the one I used for almost everything, from 2003 to 2017, so losing it was an unhappy experience.

I can't find any more links to lawrence1@earthlink.net, which is the address Verio shifted me to when they killed their residential service. I liked Earthlink, but alas, they didn't offer broadband service in my area, so I closed that account in October of 2003. E-mail sent to that address should produce a bounce message, but some systems now filter those out because of spammers using spoofed addresses. If you e-mailed me at the Earthlink address, once again, I did not get it, and never will. It's gone. Try again with the right address.

And SFF Net shut down in March of 2017, so that address disappeared, too.

If you find e-mail links to any of those addresses, or any address for me other than misenchantedpress@gmail.com, please take a moment and tell me. Thanks.

I'm sorry for the inconvenience.

You used to have a form where I could sign up for a mailing list that would notify me when the Misenchanted Page was updated. What happened to that?

I dropped it many years ago. In fact, I used to have several mailing lists, and I gradually dropped all of them. I do have (as of December 2011) an e-mail newsletter you can sign up for, which comes out (so far) maybe once a month, but it's non-specific, and it's not connected to my website as such. If you're interested you can e-mail me to subscribe.

I abandoned the older lists mostly because I kept forgetting to send out the notices I'd promised. I'd make grand plans for what I was going to do, but then I'd get distracted and forget something, and the whole thing would fall apart, and I'd never get around to sending a notice...

Also, I got tired of getting bounce messages from dead addresses, and thanks to the plague of spammers my ISP at the time, SFF Net, changed their rules on mass mailings so that it was much more difficult to send them than it used to be, and the whole thing became a hassle.

So I quit. I sent out one last notice telling people I was discontinuing the service.

Some fans have on occasion talked about organizing a maillist; in fact, there was an Ethshar list on Yahoogroups for awhile. It died for lack of interest.

Have you ever considered having a professional run your site for you?

Not really. People have offered often enough, believe me -- but I like doing it myself, even if it does get messy and out of date. It's fun. If someone really wants to do a website about me, I have no objection to fan sites, but this one is mine, and I'm keeping it. 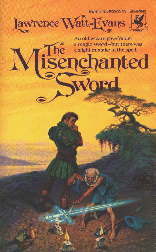 The website's name comes from my bestselling novel.